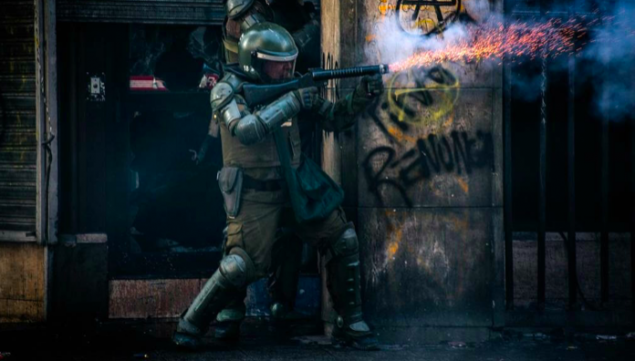 Media bias in favor of Piñera’s hardline neoliberal administration must also be juxtaposed with the unfolding coverage of anti-government protests in Bolivia. In yet another case of self-serving hypocrisy, US corporate media have moved to revoke left-wing President Evo Morales’ democratic credentials after his recent re-election.

Chile’s anti-neoliberal rebellion is entering its third week, and the brutal crackdown continues. Hard-right President Sebastian Piñera and his generals have effectively decreed the country’s oligarch-dominated democracy out of existence by sending soldiers into the streets to kill, maim and torture their own people.

And, for the most part, the Western corporate media blackout persists unabated. 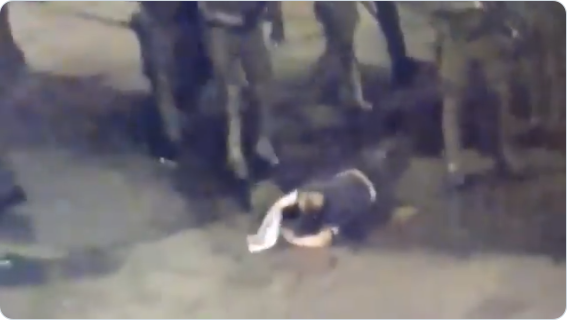 October 25’s historic 1.2 million–person march in Santiago—the largest since the end of the dictatorship—has forced some outlets to begin to acknowledge state violence. But corporate journalists continue to largely overlook the Piñera government’s mounting atrocities.

As I examined recently for FAIR (10/23/19), this behavior contrasts remarkably with the corporate media’s unanimous backing of regime change in Venezuela, endorsing insurrectionary protests and vilifying Nicolas Maduro as a “dictator” (FAIR.org, 4/11/19).

This media bias in favor of Piñera’s hardline neoliberal administration must also be juxtaposed with the unfolding coverage of anti-government protests in Bolivia. In yet another case of self-serving hypocrisy, US corporate media have moved to revoke left-wing President Evo Morales’ democratic credentials after his recent re-election.

By October 21, the news had broken in the Chilean press that Ecuadorian national Romario Veloz, 26, had been shot dead by state security forces while taking part in a protest in northern Chile the previous evening.

Over half a dozen people had already been killed since the protests began on October 16, and at least 1,420 detained at the time, according to Chile’s National Human Rights Institute (known in Spanish as INDH). Graphic videos of abhorrent state repression were already circulating widely on social media.

One might expect such glaring atrocities to spark attention from supposedly reputable international news outlets like the New York Times. It hasn’t. 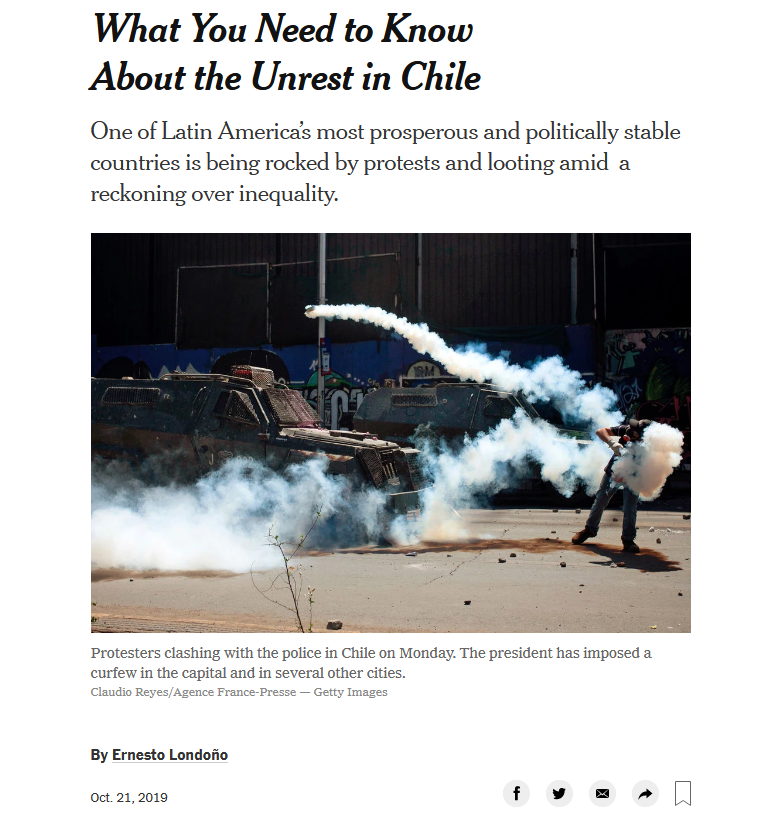 What you don’t need to know about the Chilean unrest, according to the New York Times(10/21/19), is how Chile’s government has violated human rights to suppress it.

A Times article published on October 21, headlined “What You Need to Know About the Unrest in Chile,” made no mention whatsoever of the mounting allegations of egregious human rights violations.

The article’s author, Times Southern Cone chief Ernesto Londoño, was quite busy that evening tweeting about anti-government protests—not in Chile, but in a country he does not technically cover, Bolivia, whose protests had yet to cause any reported deaths.

Bolivia’s US-backed opposition had just taken to the streets, crying fraud after the October 20 presidential elections that saw Morales win by the necessary ten-point margin to avoid a run-off. The controversy centers on a 24-hour delay in the quick count reporting of results by Bolivia’s electoral tribunal, but according to CEPR’s Mark Weisbrot (10/22/19), preliminary analysis of publicly available data from over 34,000 voting tables “shows no evidence of irregularity.”

Londoño tweeted a graphic video of a bloodied university president “reportedly struck by tear gas” during a protest—something he has yet to do in the case of Chile, despite the abundance of appalling footage.

In an article on the results (New York Times, 10/21/19), the reporter repeats the “damning” allegations of possible fraud by the OAS observer mission, which, he said, “raised the prospect that a victory by Mr. Morales would be regarded by the international community as illegitimate.”

Londoño failed to note that the OAS has presented no hard evidence—statistical or otherwise—to justify its “deep concern” over the supposedly “inexplicable” reversal in the preliminary results that gave Morales the needed edge. Nor did he make mention of the OAS’s ignominious track record of politicized electoral interference, or of the fact that the regional body is currently headed by a conspiracy theorist who has claimed in CIA fashion that Venezuela and Cuba are fomenting mass anti-neoliberal protests in Ecuador, Chile and Colombia. Notwithstanding this blatant bias, Morales has authorized the OAS to carry out an audit of the election results, which the opposition has revealingly opted to boycott.

The Times reporter crucially omits the fact that Morales has long enjoyed overwhelming support in the countryside, where vote tallies are generally delayed, with rural citizens frequently traveling significant distances to cast their ballots.  In fact, of the 106,925 new votes counted in Cochabamba by October 22, Morales won by 52.2 percent to his rival’s 35.4 percent.

Lacking a smoking gun, Londoño instead turns to public perceptions to substantiate the fraud allegations. “The accusations of fraud created a widespread sense that the president or his allies had worked behind the scenes to rig the vote,” he notes.

It would appear that the New York Times is only concerned about popular opinion when it happens to coincide with Western establishment wisdom. Londoño cited no such “widespread sense” in Chilean society that President Piñera is a Pinochet-style butcher whom a majority thinks should resign and call early elections.

This kind of shoddy reporting is anything but accidental, given that Evo Morales, unlike Sebastian Piñera, is no friend of Washington. As the US’s local allies have repeatedly tried to overthrow Bolivia’s indigenous president, Londoño is therefore permitted to slander Morales’ democratic record with impunity.

“Critics say [Morales] has become increasingly authoritarian, accusing him of abusing his influence over the judicial system to intimidate or sideline political rivals,” he writes, declining to cite any actual critics, in a thinly veiled enunciation of his paper’s editorial line.

This nakedly biased journalism, demonizing Washington’s foes and covering for its clients, is very much par for the course.

Last year, the Trump administration and its hard-right opposition proxies preemptively refused to recognize the results of Venezuela’s presidential election, despite opposition candidate Henri Falcon reaching an agreement on electoral guarantees with the government. Falcon, at the time the highest-polling opposition figure, according to widely cited anti-government pollster Datanalisis, was reportedly threatened with sanctions by Washington for daring to defy the US-backed boycott.

On election day, Maduro won an overwhelming victory over a divided opposition whose main parties opted to abstain rather than risk losing to a diminished but still highly mobilized Chavista bloc.

The opposition cried fraud—as they had done in virtually every election they lost over the past two decades—without proffering any proof of vote rigging. Under Venezuela’s automated electoral system, witnesses from all political parties must sign off on vote tallies in each polling center, which are randomly subject to a hot audit the same day, rendering fraud immediately evident. 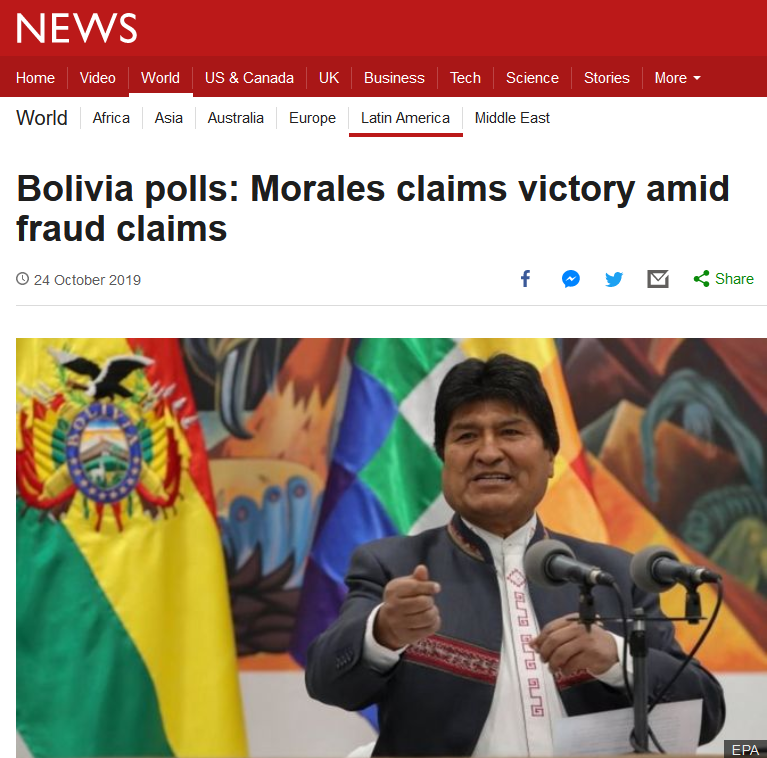 The corporate media dutifully played its part, going on to recite the baseless fraud claims ad nauseam up through the present, effectively delegitimizing the election and paving the way for the current coup effort (FAIR.org, 5/23/18).

Meanwhile, the US State Department, which has refrained from making any statement on the brutal crackdown in Chile, was quick to weigh in, accusing the electoral tribunal of attempting to “subvert Bolivia’s democracy.”

Such coverage would be unthinkable in a Western country, where one would hope that a political opposition that refused to recognize election results and proceeded to torch ruling-party offices would be condemned across the media spectrum.

The scale and staying power of Chile’s anti-neoliberal rebellion has nevertheless forced some corporate outlets to make amendments to their narrative portraying the Piñera government as “inept” or “incompetent” (FAIR.org, 10/23/19) rather than illegitimate or criminal.

Bloomberg (10/30/19) and the Guardian (10/27/19) were among the few to report on the 160 people who have suffered eye injuries, including at least 26 blinded in one eye, due to authorities firing of 9-millimeter rubber-coated lead bullets at demonstrators’ heads.

Similarly, Bloomberg (10/30/19) and AP (published in Time, 10/29/19) were rare outlets that referred to the savage repression as a “crackdown.” Bloomberg (10/30/19) went as far as to compare the mass protests to the “1988 plebiscite that ended the dictatorship of Augusto Pinochet.” 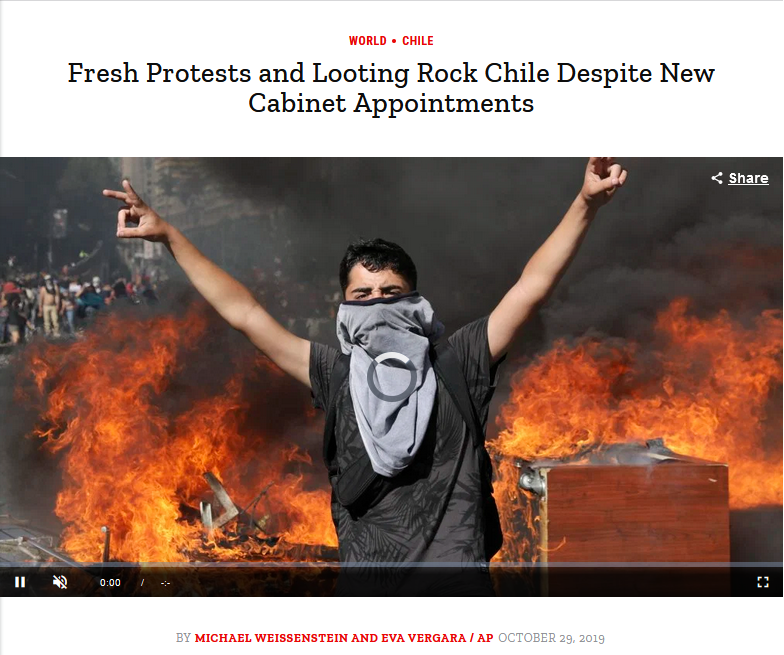 That AP article is typical of the recent corporate media backpedaling. While acknowledging in the 12th paragraph that the military is engaging in a “crackdown” that has left “dozens partially blinded,” the authors spent the first four paragraphs describing the “looting” and “attacks” allegedly carried out by protesters, implicitly rationalizing the state’s repression.

AP joins the vast majority of Western media in ignoring the INDH’s appalling statistics concerning the widespread criminality of Chilean state security forces. According to the body, as of November 4, 1,659 people have been hospitalized for injuries, including 40 shot with live ammunition, 473 wounded by buckshot and 305 by unidentified firearms.

The INDH has filed 181 lawsuits against state bodies so far, among them 133 for torture and 19 for sexual violence, including two cases of alleged rape.

For the most part, the op-ed pages of major Western newspapers continue to ignore or whitewash the crimes of the Piñera government.

A rare exception is a hard-hitting Washington Post op-ed (10/29/19) by Rodrigo Espinoza Troncoso and Michael Wilson Becerril, denouncing the state’s “brutal repression” and pointing to Chile’s anti-democratic, Pinochet-crafted constitution as the problem.

To date, no corporate outlets have referred to Piñera as “authoritarian” or a “dictator,” as they have done repeatedly in the case of Venezuela’s Maduro (FAIR.org, 4/11/19) and increasingly Bolivia’s Morales. No Western newspaper has published an editorial demanding their government pressure Piñera to end the military crackdown and relinquish power.

The coverage of Chile’s uprising proves once again that criminality on the part of Western states and their clients is perfectly palatable to corporate journalists whose atrocity, Michael Parenti observes, is always “against the truth.”

Lucas Koerner is an editor and political analyst at Venezuelanalysis 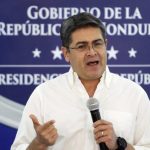 The US double standard in Venezuela vs. HondurasBackground, Discussion, Honduras, Latin America and the Caribbean, Venezuela 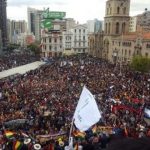 Evo Morales: fraud allegations are pretext for coupBolivia, Latin America and the Caribbean