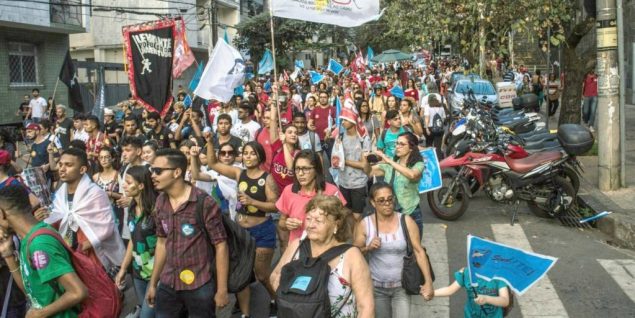 Why are New York Times and Guardian downplaying resistance to Brazil’s far-right president?

Hundreds of thousands of Brazilians took to the streets of 211 cities on August 13 to protest far-right Brazilian President Jair Bolsonaro’s austerity cuts and privatization plans for the public university system. It was the third in series of national education strikes, dubbed “the Education Tsunamis,” organized by national students unions together with teachers unions affiliated with the Central Ùnica de Trabalhadores (Unified Workers Central/CUT)—the second-largest labor union confederation in the Americas. 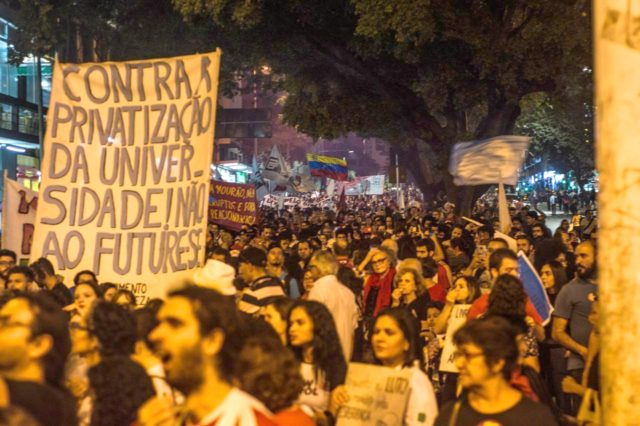 Organized from the bottom up by teachers, high school and university students, through thousands of democratic assemblies across the country, communication between activists in the different towns and cities insured that the August 13 street protests were staggered throughout the day to achieve maximum impact. Starting in smaller cities during the morning rush hour, with protests numbering in the low thousands, they increased in size as the day progressed, with crowds of 30,000–50,000 in larger cities like Recife, culminating during the evening rush hour in Brazil’s three largest cities, with an estimated crowd of 100,000 shutting down Avenida Paulista in the heart of São Paulo’s financial district.

There, instead of the usual honking cars, groups of teenagers danced and sang things like, “I want education, to be intelligent, because for stupid we already have our president.” Thousands of older people came out in solidarity with the teachers and students, and the atmosphere was one of hope against Bolsonaro’s sub-fascist project, and its attempt to purge the education system of critical thinking through a revival of the old Nazi trope of “Cultural Marxism.”

In short, it seemed like the perfect feel-good event for newspapers like the Guardian and the New York Times to share with their liberal readers. After all, after the US, Brazil is the most populous, largest in area and wealthiest nation in the Americas. After all, both newspapers have taken editorial positions against Bolsonaro, and regularly criticize his environmental and human rights abuses. After all, both papers have run numerous articles celebrating the spirit of the young protesters in Hong Kong and Venezuela in recent months, complete with inspiring quotes and photographs from the ground. 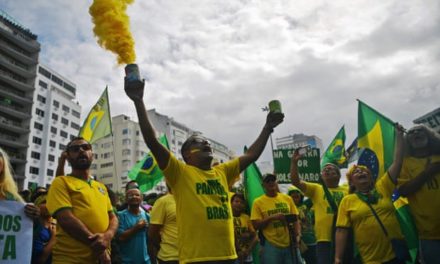 The Guardian‘s photograph (5/26/19) of a pro-Bolsonaro rally is photographed from below—concealing the small size of the crowd and giving the demonstrators a heroic pose.

Unfortunately, this didn’t turn out to be the case. The Guardian, which ran two articles about smaller pro-Bolsonaro protests in May, with photos of protesters shot from below to make them appear heroic, did not even mention it. The New York Times ran a 129-word stub from the AP that low-balled the number of cities where protests took place, and says they were smaller than the Education Tsunami protests in May (factually correct, but contextually misleading, since they were still huge).

The issue of under-reporting and ignoring protests by Brazil’s so-called “organized left”—the labor unions and popular social movements that make up the traditional support base for the Workers Party—is a historic problem. One of the main causes for this is that the organizations responsible for generating official crowd numbers in Brazil are its historically neofascist state military police forces.

Brazil’s military police, which run organized crime militias and death squads, sell weapons to the drug-trafficking gangs, and commit torture and summary executions at the rate of 5 per day in Rio de Janeiro alone, are responsible for providing crowd numbers. Brazil’s traditional media outlets, like Globo TV, which was created by the 1965–85 military dictatorship as a means of social control and are nearly as conservative, follow their lead. This explains why, for example, similar sized protests for and against the illegal impeachment of President Dilma Rousseff in March, 2015, could be reported in the media, respectively, as 1 million and 9,000.

Everyone in the foreign correspondent community knows that the Brazilian military police are not impartial judges of crowd size. When Anglo newspapers do report on progressive protests in Brazil, however, they tend to play along with the game.

During the lead up to the 2018 presidential election, hundreds of thousands of women took to the streets in cities around the world in the #NotHim protests against Bolsonaro. In São Paulo City, an estimated 150,000 came out to Largo da Batata, and protests took place in some 30 other cities across the state, which is home to around 20% of Brazil’s total population. The São Paulo State Military Police decided to simply not release crowd numbers. Others states followed suit, and zero was added for each of them into the total estimate.

The foreign correspondents knew this—it was clearly explained in all the Brazilian papers. Nevertheless, the New York Times spoke of “crowds in the tens of thousands” and the Guardian called it “thousands.” These artificially deflated numbers gave the false impression that women’s resistance to Bolsonaro was weaker than it really was. 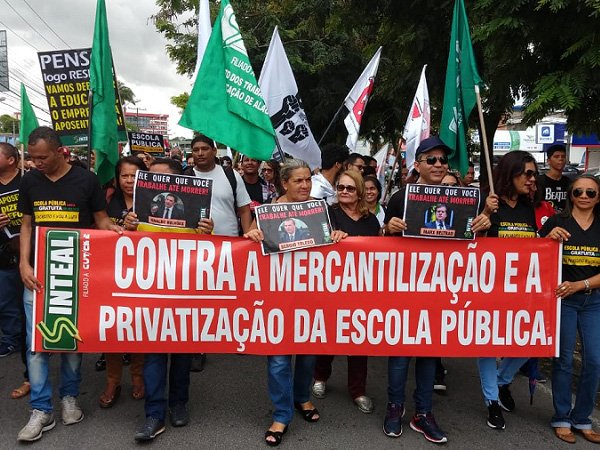 Underreporting of left protests is such an ongoing problem in the Brazilian media that for the last five years, activist/media collectives like Midia Ninja and Jornalistas Livres, which have millions of social media followers, have sent volunteers to all of the major protests around the country to film and photograph crowd sizes. Labor unions now do the same, and everyone shares the information online.

When, for example, the National Education Workers Confederation announced, as it did on August 14, that protests took place in 211 cities, anyone could easily go onto their site and see photos and video evidence from each city backing their claim. So why don’t gringo journalists ever question the official numbers? Even more importantly, why would they decide not to report on events like the August 13 Education Tsunami at all?

Is it just sloppy reporting? Freelance journalist pay has dropped significantly in the last ten years, and many correspondents don’t have a full grasp of Portuguese. Could it just be that they are too inexperienced to question what is reported in Brazil’s ideologically compromised commercial media? Could their pay be so low that they just paraphrase articles from Brazilian newspapers?

The problem is bigger than individual flaws with foreign correspondents. Like Trump and British Prime Minister Boris Johnson, Jair Bolsonaro represents what George Monbiot refers to as a “killer clown” (Guardian, 7/26/19). According to Monbiot, clowns like Bolsonaro provide distraction and deflection for elites. “While the kleptocrats fleece us,” he says, “we are urged to look elsewhere.”

While the commercial media distracts us with horror stories about Jair Bolsonaro the killer clown, their corporate advertisers are making billions from the deregulation of pesticides and mining, petroleum and pension fund privatization in Brazil. You have to ask yourself if these newspapers really want Bolsonaro to leave office. Could wanting him to stick around be why they prioritize feel-bad click bait about Bolsonaro’s clownish behavior over showing solidarity with the people fighting against his government?

Regardless of the motives, one thing is for sure: Downplaying and ignoring organized resistance supports Bolsonaro’s sub-fascist project for Brazil, and the US corporations that benefit from it.

Brian Mier is co-editor at Brasil Wire and editor of the book Year of Lead: Washington, Wall Street and the New Imperialism in Brazil. He has lived in Brazil for 25 years.