May update: Blinken’s visit to Ukraine and external governance 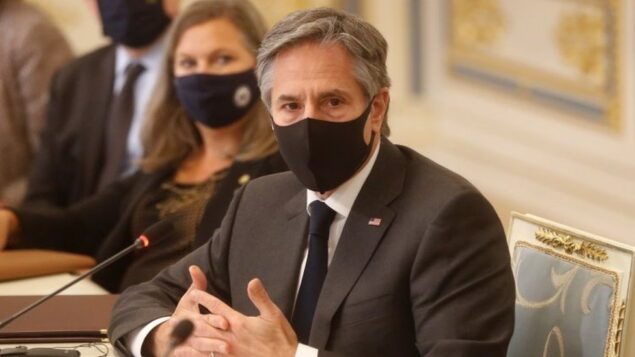 The month of May saw Anthony Blinken and Victoria Nuland visit Kiev. NCW’s contributor, Dmitriy Kovalevich, write his regular, exclusive update, in which he provides a detailed explanation of the multiple reasons behind the visit and what’s been happening in Ukraine as a result.

For Ukrainian politicians, the month of May began kicked off with the visit of Anthony Blinken and Victoria Nuland to Kiev. The same Victoria Nuland who in 2014 supported ultra-right nationalists on the Maidan and became known amongst Ukrainians for distributing cookies.

The main outcome of the pair’s visit was the strengthening of Ukraine’s external governance, carried out under the brand of “reforms.” In words, the essence of the reforms as promoted by the United States and Great Britain is “the fight against corruption.” For this purpose, supervisory councils and clubs of international experts are created at all state-owned companies, law enforcement agencies, and ministries. The external experts and supervisors have decisive votes in decision-making and the appointment of Ukraine’s officials. The international experts or “independent experts” as they are called, are the delegated representatives of those countries that give Ukraine money for these so-called reforms; namely, the EU, the US and the UK. Thus, under the pretext of combating corruption and reforms, the authorities of a foreign “independent” country are subordinated to external control; that is, the actual colonial administration.

The paradox of such an external control is that the Ukrainian state-owned companies show colossal losses. [1] Nevertheless, the Ukrainian authorities and elected deputies are unable to check where the funds are going – such information has been declared a commercial secret.

Vadim Rabinovich, a deputy from the party Opposition Platform – For Life, considers the companies’ unprofitability to be a logical consequence of the way the managements operate. “‘Corporate governance, sky-high salaries and bonuses,’ plus ‘independent’ supervisory boards. All this together will bring the image of Ukraine to a new level, they said. Well, take a look at what it has led to”, said the deputy. [2] The oil-gas company “Naftogaz”, which suffered 19 billion hryvnia in losses last year, during the same year it doubled salaries and bonuses for its management.

The same company also receives funds ($ 3 billion a year) from the Russian Federation for gas transportation. And nobody is able to say where the money goes. The company transfers part of the funds to the lobbyists in the United States and Europe for the struggle against Nord Stream 2. [3] Moreover, it is unprecedented that this state-owned company has recently filed a lawsuit against the government of Ukraine (as if a private organization), demanding 4.5 billion UAH compensation for losses due to the state’s obligations (as for two months the government did not let the state-owned company increase prices). [4]

The Ukrainian authorities are in a hurry to fulfill all the recommendations of the G7 countries’ embassies, sometimes they even overdo it. Blinken’s visit has resulted in the resignation of three ministers, including the Minister of Health. This is despite the fact that the Ministry of Health and Ukrainian doctors expressed their support for him [5] The main complaints about his work were the failure of the vaccination program, but it no longer depends on the Ukrainian minister. Since last year, Kiev has refused offers to produce Russian vaccines under license and is afraid to buy vaccines from China, so it relies solely on humanitarian supplies from Western countries. Another complaint about the minister’s work was the “slowdown of reforms” that have been recommended by western creditors. These comprise the reduction of medical facilities and the closure of tuberculosis dispensaries. It is for this reason that Ukraine’s doctors have opposed the resignation and these neoliberal reforms.

Blinken also discussed reforms to the SBU (security service) with Zelensky. The corresponding law was soon published by Maryana Bezugla, a deputy from the presidential Servant of the People party. It is noteworthy that Bezugla is the author of the bill, but she herself has nothing to do with the work of the security services. She is a medical professional but has received training from US-funded NGOs and the US State department. The essence of the SBU reforms is to take the fight against economic crimes from the special services and redirect the SBU exclusively to the fight against the Russian Federation and Ukraine’s opposition media. Simply put, as a result of the reforms, Ukraine’s course towards NATO should be continued, and all those who disagree with this should be dealt with by the special services. [6] The reforms imply blocking the media without a court decision. The SBU reforms, at the suggestion of the United States, also legitimizes the practice of “secret transfers of people and articles across the border,” that is, the endorsement of abductions.

“The main details during the Blinken visit are statements about the need for corporate governance reform. The United States wants to reserve the right to control the processes in state-owned monopolies in Ukraine through supervisory councils: in Ukrzaliznytsia (railroad company), Naftogaz (oil company) and so on … Ukraine, in fact, does not choose in which direction to go. In 2014, we were given a course, and we are following it. The lack of Ukraine’s independence has been more than obvious since 2004”, stated the Ukrainian political scientist, Konstantin Bondarenko. [7]

The head of the Housing Union of Ukraine, Oleksandr Skubchenko summed up the visit, saying: “Overall, they will rob us even more. And we will fight with Russia – to the last of us, if required. The United States does not need Ukraine for anything more – we are just a colony between Russia and the EU.” [8]

Ukraine media in a stir

Not so long ago, the Ukraine media was stirred up by a lecture by the ex-Ambassador of Canada to Ukraine (2014–2018) Roman Vashchuk, who is critical of Ukrainian statehood. According to him, Euromaidan gave the West a unique opportunity to impose certain financial and personnel decisions on the Ukrainian authorities. Moreover, he made clear that the Western politicians themselves, being in the place of their Ukrainian colleagues, would never do this in their own countries, as these decisions would lead to an increase in Ukraine’s dependence or harm its national interests. [9]

When asked at the beginning of the year, almost two-thirds of Ukrainians (65%) said they agreed that their country is under external control. [10] This is evidenced by the results of a study carried out by the Ukrainian Institute for the Future. Only 22% disagreed with this statement.

In May, Viktor Medvedchuk, leader of the Ukrainian party Opposition Platform for Life, who was recently arrested and sanctioned by Kiev, said his persecution was also the result of Blinken’s visit. “I have no doubt,” he said, “that the United States is involved in this, because Washington has introduced external management since 2014. It “developed successfully” under Poroshenko and was inherited by Zelensky… The center of political control of the country is located in the embassy of the United States of America.” [11]

As a result, Ukrainian protesters are increasingly holding rallies, not near the Ukraine’s parliament, ministries or the president’s office, but in front of the US embassy, having realized on whom the solution of their problems depends. For example, on May 27, Ukrainian sailors rallied in front of the US Embassy, protesting against the bribes demanded by Ukrainian officials from the Ministry of Infrastructure for the issuing of sailors’ job licenses. [12]

One of the consequences of the visit was the parliamentary measures submitted by Zelensky in May to increase the numbers of the armed forces and “the foundations of national resistance.” These involve the formation of territorial defense armed units, which would include radical nationalists and veterans of the war against Donbass. [13] One of the undertakings of these bills would be the formation of “resistance to the occupation” in the territories of the Russian Crimea and the republics of Donbass; that is, sabotage units that will have to intervene to attack the infrastructure of the Russian Federation, L/DPR. It is noteworthy that the Ukrainian authorities want to assign their financing to the local budgets of the regions and unnamed foreign investors.

In terms of resolving the conflict in Donbass, Kiev proposed its own concept in May, which essentially involves changes to the Minsk agreements. [14] In fact, the concept will reformulate all Kiev’s previous proposals, earlier rejected by the republics of Donbass. Nevertheless, Kiev submits them every year, dragging out the process for years. Without elaborating, Ukraine intends to write its own Minsk agreements and implement them unilaterally, since European countries and the UN are insisting on their implementation.

The first discrepancy with the original Minsk agreements is that as under Poroshenko, Kiev initially requires the transfer of control of the border of the L/DPR with the Russian Federation to Ukraine, and only then to hold elections there, effectively enclosing the inhabitants in a kind of ghetto. In fact, we are seeing a repetition of everything that has already been passed more than once. Back in December 2019, Russian President Vladimir Putin rejected such a plan, proposed to him by Zelensky at the Paris summit, warning of a possible genocide when he said: “The law on amnesty has not yet been adopted. In 2015 we still agreed that there are some solutions, but nothing works. And the Ukrainian side constantly raises the question: give us the opportunity to close the border with troops <…> But I can imagine what will start next. There will be [another) Srebrenica.” [15]

All the same, Kiev is once again offering the same project.

Another discrepancy concerns the clauses of the people’s militia, which is to ensure order in these territories. Kiev, under the “people’s militia,” formed from detachments of its National Guard, that is, neo-Nazis from “Azov,” reinforced by some residents of the Donetsk and Luhansk regions, loyal to the current Kiev government. This, in reality, means that Kiev is refusing consensus and reconciliation and intends to bring neo-Nazis into Donetsk. In the original agreements, detachments of the people’s militia would be created by local councils operating within the territories of the L/DPR. Since Kiev does not recognize the legitimacy of these local councils, it is ready to grant this right only to new councils elected under the control of Ukraine.

Separately, Kiev is revising the points related to the reform of decentralization, which must be coordinated with the L/DPR, taking into account the peculiarities of these territories (the special status of Donbass in the Constitution required by Minsk agreements). Earlier, President Zelensky said in response to these requirements that he would not allow “changes to the Constitution of Ukraine regarding the federalization of its structure.” [16] In Ukraine, the word “federalization” has been a scare crow for seven years, despite  many countries such as Germany, Canada, the USA, India, Brazil and Mexico being federations.

Despite the contestant “war with Russia,” rhetoric emanating from Kiev, May saw Russia resume oil and diesel fuel supplies to Ukraine as a result of the fuel crisis that has begun there. [17] Kiev’s policy in this sphere is only to parrot the demands of the United States and Great Britain addressed to the European Union – to impose sanctions or terminate trade relations. At the same time, Ukraine itself is not obliged to follow its own demands made to the EU countries, as Russia remains its main trading partner.