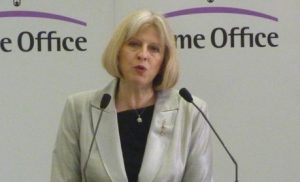 Theresa May during her tenure as home secretary, becoming the longest-serving home secretary in UK history (photo by UK Home Office)

As Home Secretary, Theresa May ensured that counter-terror police were overruled to allow the Manchester bomber and his father, a known member of Al-Qaeda’s Libyan affiliate, the Libyan Islamic Fighting Group, to train and fight in Libya.

The same policy allowed hundreds of ‘subjects of interest’ to shuttle back and forth between Britain and the training camps and battlefields of Libya and Syria as part of Britain’s campaign to destroy those states. As far as she and her government are concerned, the murdered victims of the Manchester and London Bridge attacks are merely collateral damage.

On Sunday [June 4], I awoke to the news of another terror attack in London; actually, two attacks, as there was a triple suicide bombing in Kabul as well. The reports coming out of both places are truly horrific, and it beggars belief that there are people who could support such actions. The British government does support these kinds of activities – and the groups who carry them out – as a tool of its foreign policy, and has done so for many years.

In 2011, in Libya, Britain threw its support behind a vicious racist insurgency, which targeted Libyan police and soldiers as well as African migrants and black Libyans. Britain led the call for military intervention on behalf of the insurgents, calls which resulted in almost 10,000 NATO air sorties against Libya, eventually toppling the Libyan government and bringing the rebels to power.

The British government knew very well the nature of the forces it was supporting. On the second day of the uprising, a month before the NATO intervention began, the rebels themselves admitted to executing 50 African migrants (whom they falsely accused of being ‘mercenaries’) whilst locking up others in a prison cell and burning them alive. Other reports included between 70-80 migrant workers from Chad being hacked to pieces by the rebel groups. One of the groups involved even called itself ‘the brigade for the purging of black skins,’ and went on to carry out the full ethnic cleansing of the town of Tawergha, which had been the only black town on the North African coast.

Likewise, the involvement of Al-Qaeda was well-known. For years, Britain had harbored fighters from the Libyan Islamic Fighting Group, Al-Qaeda’s Libyan affiliate, led by Abdulhakim Belhaj. Belhaj went on to become the commander of the rebels’ Tripoli Brigade, responsible for overthrowing Libyan government forces in Tripoli in coordination with NATO. Yes, NATO’s most important ally in Libya was the same man who had openly been the leader of Al-Qaeda’s affiliate in Libya for 15 years.

So where does Theresa May come in? Well, since 2005, the Libyan Islamic Fighting Group had officially been designated a terrorist organization in both the U.S. and Britain. Many of its members had therefore been placed under control orders, a form of house arrest. When the insurgency broke out, those control orders were suddenly lifted so the militants could go and join the British-sponsored Al-Qaeda rebellion in Libya. This was the point at which Salman Abedi‘s father went to join the fight, taking the 16-year-old Salman with him. And who allowed a known member of an Al-Qaeda affiliate to go to fight in Libya? Well, control orders come under the responsibility of the Home Office. And who was in charge of the Home Office at the time? Theresa May, the Home Secretary. Yes, Theresa May personally changed the status of known Al-Qaeda affiliates, including Salman Abedi’s father, to allow them to go and train and fight with Al-Qaeda in Libya.

But that’s not all. Every time someone on a terror watch list attempts to leave the country, this is automatically flagged up by border control officials. So counter-terror police tried to stop several of these Al-Qaeda-affiliated fighters – but were overruled by MI5. The fighters themselves called up MI5 and asked them to sort it out. MI5 comes under the responsibility of the Home Office. So this policy – in which counter-terror police were systematically overruled by MI5 to allow militants to shuttle between Britain and Libya to train and fight – was, again, signed off by the Home Secretary, Theresa May.

Salman Abedi, the Manchester bomber, was on a terrorist watch list. So his final trip to Libya for, presumably, his last training session with ISIS, would have been automatically flagged up when he attempted both to leave and to come back in. But thanks to Theresa May’s policy, this warning would have been ignored.

Likewise, Yousseff Zaghba, one of the London attackers, was clearly known to the authorities – and had even been arrested by Italian police en route to Syria – yet apparently, no attempts had ever been made to disrupt his activities in Britain. Indeed, it has now emerged that at least one of the other the London attackers, Khuram Butt, was also known to the authorities, and had appeared on a Channel Four documentary in which his comrades proudly unveiled the ISIS flag. He was also employed to work on the London Underground.

Had the government been hoping they would go and join Britain’s jihad against Syria, ready to be hit by a drone at a moment’s notice if things got out of hand?

But that’s not all. Just as the British government managed to destroy the Libyan government through an open alliance with Al-Qaeda-affiliated death squads, it attempted to do the same in Syria. Britain has provided logistical support, military equipment, training, funding and all manner of diplomatic and political support, and effectively acted as the cheerleader for this rebellion ever since it began in 2011.

In 2012, the U.S. Defense Intelligence Agency (DIA) circulated a document among various U.S. government agencies clearly spelling out that Al-Qaeda in Iraq (the group that would later form the roots of ISIS) was one of the “major forces driving the insurgency in Syria.” This document would undoubtedly have gone to the British government as well, due to the high level of cooperation in intelligence sharing between the two countries.

You might have thought that this revelation – that the Syrian insurgency Britain was supporting was, in fact, being led by one of the most vicious and genocidal branches of Al-Qaeda might have reduced British support for it. Quite the contrary, in fact, Britain stepped up its support, with William Hague leading a campaign to end the EU embargo on arms shipments to the rebels, which he eventually achieved the following year. The head of the DIA at the time later confirmed in an interview with Al Jazeera that continued support for groups like Al-Qaeda was not a mistake on the part of Western governments, but “a willful decision“.

Since then, several terrorism trials in the UK have collapsed after the defense pointed out that British intelligence had directly supported the activities of those involved. In 2014, Moazzam Begg was on trial for training British fighters in Syria. Begg admitted to doing this but argued that MI5 had given him “the green light” to do so. MI5 admitted to the court this was, in fact, true. The case collapsed, as to have continued would have implicated the intelligence services themselves.

Later the same year, Bherlin Gildo was prosecuted for attending a terrorist training camp in Syria. His defense lawyers pointed out that the group running this camp was itself being supported by MI6. Again, the trial collapsed. Since then, intelligence officers have been allowed to give evidence in secret to avoid further revelations about the true extent of this British state collusion with death squad terror.

At the same time, Britain is one of the world’s biggest gun runners to Saudi Arabia, the leading state sponsor of ISIS terrorism, shipping billions of pounds of lethal weaponry to the Saudis every year. Saudi Arabia is the biggest source of funds and weapons to ISIS; indeed, it was perfectly legal to support ISIS in Saudi Arabia right up until last year.

So let’s just recap here. The British government not only willfully destroyed the Iraqi and Libyan states, turning them into terrorist safe havens, while attempting to do the same to Syria. They have not only been funding, training and equipping violent sectarian forces, including Al-Qaeda, to destroy independent governments of the global South. They not only maintain an alliance, including the shipping of billions of pounds worth of weaponry, with the world’s major state sponsor of ISIS. But Theresa May personally has overruled her own counter-terror police to allow hundreds of British militants to train and fight in Syria and Libya unimpeded.

That the British government has blood on its hands, is without a doubt. But now, alongside the blood of millions of Iraqis, Syrians, Afghans, Pakistanis, Libyans, Nigerians, Malians, Tunisians, Algerians and many, many others, they also have the blood of 22 Mancunians and seven[1] more Londoners as well.

Note by New Cold War.org:
[1] An eighth person, a French citizen, was declared by London police on June 4 as having died in the June 3 terrorist attack in London. His body was discovered in the Thames River.

Related reading:
This is what Theresa May refused to tell you in her schoolyard sermon on terror, by Robert Fisk, The Independent, June 8, 2017

The Prime Minister is going to have her ‘embarrassing conversations’ with Britain’s Muslims, who have no power to switch off the evil ideology which Wahhabism represents. She does have that power – but she won’t use it

… ‘And still May will not say what she knows to be true: that Britain can no longer expect to go on foreign adventures and be safe at home.’

Home Office may not publish terrorist funding report amid claims it focuses on Saudi Arabia, by May Bulman, The Independent, June 1, 2017

Inquiry is thought to focus on Saudi Arabia, to which the UK recently approved £3.5bn worth of arms export licences 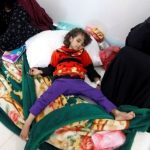 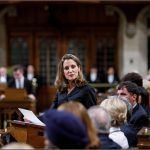