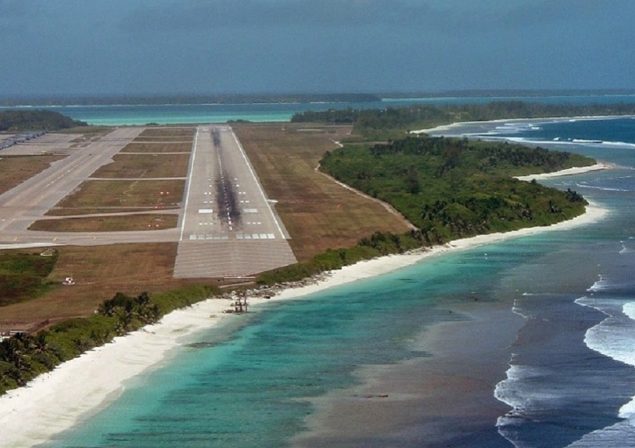 The Prime Minister of Mauritius, Pravind Jugnauth, has labeled the United Kingdom and the United States “hypocrites” and “champions of double talk” over their former colonial master’s refusal to hand over the Chagos Islands.

Further reading: Stealing a Nation – John Pilger’s film on the Chagos Archipelago; The Chagos Islands and the defeat of the UK at the UN : a precedent for Argentina and Spain; Windrush scandal continues as Chagos Islanders are pressed to ‘go back’; ‘Lambs to the slaughter’: 50 lives ruined by the Windrush scandal; A window for peace

The Prime Minister of Mauritius, Pravind Jugnauth, has labeled the United Kingdom and the United States “hypocrites” and “champions of double talk” over their former colonial master’s refusal to hand over the Chagos Islands.

Jugnauth made those comments on Sunday in the island nation’s capital city of Port Louis while addressing a crowd that was predominantly made up of Chagossians and their descendants, BBC reports. The Prime Minister said the two superpowers advocate for other countries “to respect human rights, but they are champions of double talk.”

“They are hypocrites. Shame on them when they talk about human rights and respect,” he said.

The International Court of Justice (ICJ) passed a judgment in favor of Mauritius’ claim of ownership of the archipelago in February 2019, ruling in an advisory opinion that Britain’s continued administration of the islands was unlawful and demanded they hand over the territory to the island nation.

Located in the Indian Ocean, Mauritius has always claimed Britain, their former colonial masters, forced them to cede the archipelago in 1966 in exchange for independence. The Chagos Archipelago, which France ceded to Britain after the fall of Napoleon in 1814, was part of the British Colony, which included Mauritius.

In November 1965, the UK purchased the entire archipelago from the then self-governing colony of Mauritius for £3 million and created the British Indian Ocean Territory (BIOT). Following Britain’s acquisition of the archipelago, it leased the largest island, Diego Garcia, to America in 1966.

In 1968, it evicted more than 2000 Chagossians off the island to allow for the construction of an American air base. The lease was extended to 2036 after it was renewed in 2016, and American planes have flown from the base to carry out bombing missions in Afghanistan and Iraq. The base has also been reportedly used by the CIA for interrogation.

Three months after the ICJ ruling, the United Nations General assembly also voted overwhelmingly by 116 – 6, in favor of the territory being handed over to the government of Mauritius, BBC reports.

Despite that and also demands by the African Union for Britain to end its “continued colonial administration” of the islands, the country has remained adamant.

“The UK has no doubt as to our sovereignty over the British Indian Ocean Territory (BIOT), which has been under continuous British sovereignty since 1814,” the country’s Foreign and Commonwealth Office said in a statement in November 2019.

“Mauritius has never held sovereignty over the BIOT and the UK does not recognise its claim,” the statement claimed. The response came after the United Kingdom exhausted a six-month deadline the UN gave them to withdraw their “colonial administration” of Chagos in November 2019.

Jugnauth, who has previously labeled the United Kingdom as an “illegal occupier” of the archipelago, reiterated their claim of ownership on Sunday and highlighted the overwhelming support they have from other countries.

“Our fight is just. The majority of countries support us… we will not retreat,” he said.

Francis Akhalbey is a Social Media techie and Content Manager. He loves basketball and dreams to make it in the NBA in his next life. I hope you’re reading this LA Lakers! And yes, we have Anthony Davis. Give us the ring already! RiP Kobe and Gigi!! 8|24 #MambaMentality