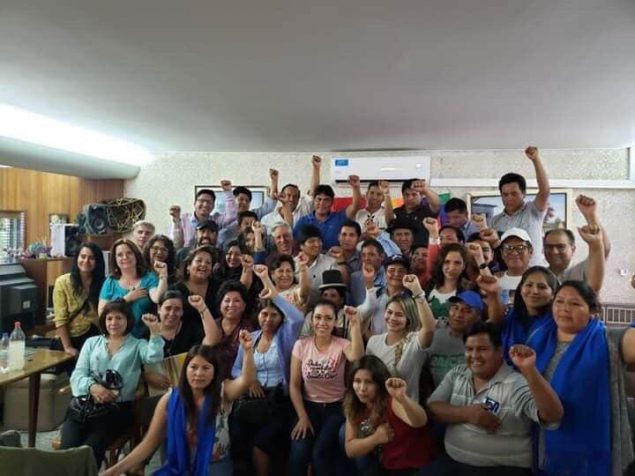 Evo Morales says he’s met with members of MAS in Argentina to begin preparing the campaign for the new elections to be held in Bolivia.

Evo Morales said on Sunday that he has met with members of the Movement Toward Socialism (MAS) in Argentina to begin preparing the campaign for the new elections to be held in Bolivia.

“A month after the coup d’état in Bolivia, we held our first meeting in Buenos Aires with some departmental and national leaders of social movements, mayors, MAS leaders and assembly members to make a political evaluation and plan for the campaign,” Morales said in his Twitter account.

After that meeting, which was attended by, among others, the main leader of the coca growers of the Tropic (after Evo), Andrónico Rodríguez, it was decided to release the following document, entitled THE BUENOS AIRES MANIFESTO.

The coup d’état in Bolivia is a conspiracy of the political right, civic groups, some police and military forces, orchestrated before the general election of October 20, 2019, in which our President Evo Morales won in the first round. The participation of the OAS in the coup is also part of the imperialist strategy to impose governments servile to neoliberal policies. It signifies a return to the privatization of the patrimony of the Bolivian people and an assault on the administration of state enterprises and institutions, wounding democracy to death with the establishment of a de facto government that massacres the Bolivian people, censors information, attacks freedom of expression, persecutes the defenders of the process of change and represses any mobilization against their dictatorial actions.

The re-establishment of relations with the U.S. government is a clear attack on sovereignty and creates conditions for a new interventionism with the return of the DEA, of foreign military bases, of interference in internal affairs and an obstacle to the integration of Latin America, the Caribbean and the Patria Grande.

Bolivia took a qualitative leap and promoted historical transformations with the Democratic and Cultural Revolution for over thirteen years, but today they want to destroy it, thereby affecting the highest interests of our homeland. The decisions of the de facto government affect the popular economy, economic stability and the redistribution of wealth. Our social conquests are at grave risk; they seek to reverse them in favour of the oligarchies and a privileged group that took the government by storm, abandoning urban and rural development policies, the production of knowledge and the strengthening of our diverse and plural Bolivian identity.

“We are with our brother president Evo after a short time that we have separated, but with a lot of energy and strength. @andronicopueblo, vice president of the Six Federations of the Cochabamba Tropics, today in Liniers, Buenos Aires, Argentina. pic.twitter.com/iPUHBVK8WV

The Plurinational State is struggling for its survival against dismemberment by the capitalist, colonial, patriarchal and confessional State that represents the Bolivian right. The transforming subject of the democratic and cultural Revolution continues to be the Bolivian people, which includes all Bolivian men and women, the indigenous native peasant peoples and nations, the intercultural communities of the countryside and the cities, the youth, the workers and the Afro-Bolivian people.

The democracy that we defend is intercultural and egalitarian, it goes beyond the agreed, elitist and excluding kind of democracy. We will never renounce the domination and ownership of natural resources by the Bolivian people,
guaranteed by nationalization, we also do not renounce redistribution and economic stability that guides our successful model of community social economy. We will never compromise our conviction of a country of peace with social justice, sovereign, with an identity and a driving force for the integration of Latin America.

We firmly reaffirm that another world is possible!

In view of this, the social organizations of Bolivia, gathered in Buenos Aires with our brother President Evo Morales Ayma, approved this “Manifesto” defining the most urgent actions to resist the coup d’état with permanent mobilization to recover democracy and power for the people.

National and international denunciation of massacres, repression and social and political persecution.

The assassinations and imprisonments are the responsibility of the de facto government. For this reason, we call on national and international human rights organizations to establish a mechanism to investigate and search the truth.

We have decided to advance actions at the national and international levels for genocide due to the massacres, repression and social and political persecution that are taking place in Bolivia.

We express all our solidarity with the families of our deceased brothers and sisters in defense of democracy, and we will accompany those mobilized so that they may be granted a life annuity for the families of the victims of the massacres and compensation for the damages to persons and families who have been victims of the repression.

The immediate approval of the law of constitutional guarantees is necessary and we demand the release of those detained by the coup government.

Free elections without repression, with the participation of all political actors.

Free elections, without repression, will define who legitimately assumes the Constitutional Presidency of the Plurinational State of Bolivia. The social organizations and the people will decide their strategy in organic meetings, with broad convocation of all sectors and collectives that fight for democracy and the defense of the process of change. Elections are necessary, but not sufficient because resistance to the de facto government and the recovery of democracy is the defense of the Constitution, of participation, of intercultural and egalitarian democracy, of the communitarian social economic model, of nationalization, of natural resources, of autonomies and of all the institutions that were born with the construction of the Plurinational State.

There will be no free elections with threats, persecution, violence against the people and preventing the organized participation of the largest political force in the history of Bolivia, the MAS-IPSP. The convocation of general elections must guarantee the citizen’s vote in the entire national territory as well as abroad; it is a right won by the Bolivian people.

Fight against the privatization and plundering of the patrimony of the Bolivian people, preserve the social conquests and defend our patriotic symbols.

We will defend the community social economy model, the functioning of the State’s strategic enterprises, the economic stability policy, exchange parity, the programs and projects currently being executed, as well as bonds, the Unified Health System (SUS), cultural programs, job stability, budgets against gender violence and defense of women’s rights, urban and rural development programs and projects, quality access to basic services and other social advances implemented by the Democratic and Cultural Revolution.

Our struggle is also against hate speech, racism, misogyny, colonialism and interventionism, which violate the most fundamental rights of indigenous nations and peoples, the rights of women, girls and boys, the elderly and people with diverse identities, in defense of the Plurinational State and secularism.

The Wiphala is our symbol of identity and diversity, we will mobilize with vigils, cultural activities and other measures to prevent the hypocritical use of our patriotic symbols, of our ancestral ancestral native indigenous peasant legacy, for this reason we demand the reparation to our Wiphala.

Only the unity of the people will defeat the dictatorship.

We must guarantee the unity of our social organizations and of the Bolivian people, to defend the Democratic and Cultural Revolution, therefore:

1. We ratify the guidelines established in the Decalogue elaborated for the Expanded Cochabamba, held last December 7.

2. Demand the interpellation of authorities involved in massacres, persecutions and acts contrary to human rights and the Political Constitution of the State.

4. Exercise the revolutionary principle of criticism and self-criticism.

5. Improve the organizational structure of all social sectors at all levels.

6. Organic consultation on the bases for a candidacy that expresses the unity of our people.

7. Our political movement must be broad and inclusive, strengthening the character of a Political Instrument for the Sovereignty of Peoples (IPSP).

8. Free general elections with constitutional guarantees for all citizens. Elections without exclusions or proscriptions.

9. A conscious and consistent vote that expresses the unity of the Bolivian people.

10. To call on the UN, the EU, the IACHR, MERCOSUR and the democratic countries of the entire world to accompany the development of the next elections.

Resist, persist and insist, but never desist from our Democratic and Cultural Revolution! 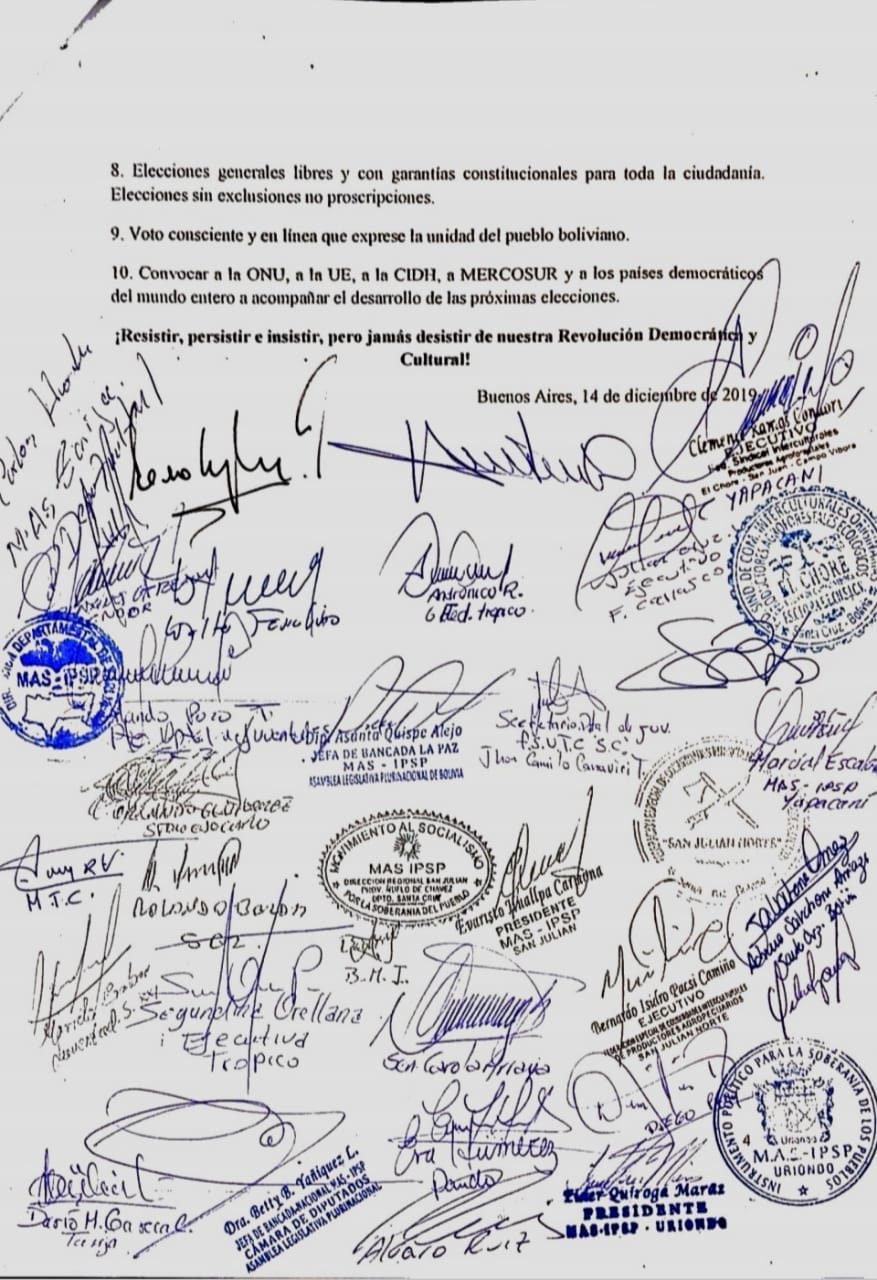