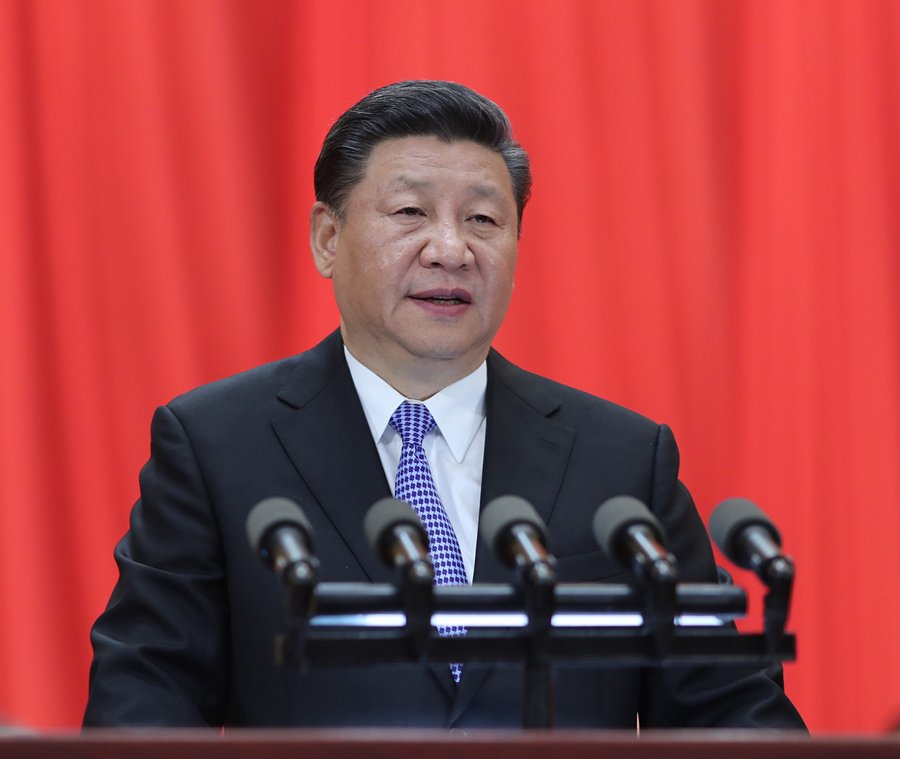 Xi Jin Ping, speaking on the 200th anniversary of Karl Marx’s birth, stands in marked contrast to the event’s reception in the West and provides a strong indication of the direction in which China, and the Communist Party of China, is heading. It should be understood not as a formal eulogy but a statement of intent: Xi states “Marxism is a theory of practices that directs the people to change the world”

Two centuries on, despite huge and profound changes in human society, the name of Karl Marx is still respected all over the world and his theory still shines with the brilliant light of truth, Chinese President Xi Jinping said Friday.Chinese President Xi Jinping, also general secretary of the Communist Party of China Central Committee and chairman of the Central Military Commission, speaks during a conference to mark the 200th anniversary of the birth of Karl Marx in the Great Hall of the People in Beijing, capital of China, May 4, 2018. (Xinhua/Ju Peng)

Xi, also general secretary of the Communist Party of China (CPC) Central Committee and chairman of the Central Military Commission, made the remarks at a grand gathering in Beijing to celebrate the 200th anniversary of Marx’s birth.

Xi said Marx is the “teacher of revolution for the proletariat and working people all over the world, the main founder of Marxism, creator of Marxist parties, a pathfinder for international communism and the greatest thinker of modern times.”

“Today, we hold this grand gathering with great veneration to mark the 200th anniversary of Marx’s birth, to remember his great character and historic deeds and to review his noble spirit and brilliant thoughts,” Xi said at the event.

With noble ideals and no fear of difficulty or adversity, throughout his life, Marx devoted himself to perseveringly striving for the liberation of humanity, scaling the peak of thought in his pursuit of truth, and the unremitting fight to overturn the old world and establish a new one, according to Xi.

Marx is not only a great figure who bore the weight of the world, but also an ordinary person with passion for life, who was sincere and true to friendship, Xi said.

The most valuable and influential spiritual asset that Marx left us is the scientific theory named after him — Marxism. Like a spectacular sunrise, the theory illuminated the path of humanity’s exploration of the law of history, and humanity’s search for their own liberation, Xi said.

Xi said Marxism is a scientific theory that reveals the rule of human society development in a creative manner.

Having developed the materialist conception of history and surplus value theory, Marx showed how humanity would leap from the realm of necessity to the realm of freedom and the road for the people to realize freedom and liberation, Xi said.

“Marxism, for the first time, explored the path for humanity’s freedom and liberation from the stance of the people, and pointed out the direction, with scientific theory, toward an ideal society with no oppression or exploitation, where every person would enjoy equality and freedom,” Xi said.

Stressing that practicality is a prominent characteristic of Marxism that makes it different from other theories, Xi said Marxism is a theory of practices that directs the people to change the world.

It is an open theory that is constantly developing and always stands at the frontier of the times, Xi said. “That is why it is always able to keep young, explore the new issues in the development of times and respond to the new challenges for human society.”

The general secretary said that over the 170 years since the publication of The Communist Manifesto, Marxism had been spread around the world, unrivaled in the history of human ideology in terms of the breadth and depth of its influence.

After the end of the World War II, a large number of socialist countries were established, Xi said, stressing that the founding of the People’s Republic of China, especially, has greatly increased the socialist strength in the world.

“There might be setbacks in the development of socialism in the world, but the overall trend for human society development has never changed, and it will never change,” Xi said.

“Marxism has not only profoundly changed the world, but also China,” Xi said.

The reverberations of the October Revolution in Russia brought Marxism-Leninism to China, pointing out the direction forward, offering a brand new choice for the Chinese people in their struggle to survive, and setting the scene for the birth of the CPC.

Since the CPC’s birth, it has combined the fundamental principles of Marxism with the reality of Chinese revolution and construction, transforming the Chinese nation from “the sick man of East Asia” to one who has stood up, by uniting and leading the people through long-term struggle.

“This tremendous transformation serves as cast iron proof that only through socialism can we save China,” Xi said.

“This tremendous transformation serves as cast iron proof that only through socialism with Chinese characteristics can we develop China,” Xi said.

In the new era, the CPC again combined the fundamental principles of Marxism with the reality of China in this new era, uniting and leading the people in “undertaking the great struggle, building the great project, advancing the great cause and realizing the great dream.”

The Chinese nation has come to embrace a tremendous transformation, as the one who has grown rich now is becoming strong.

“This tremendous transformation serves as cast iron proof that only by adhering to and developing socialism with Chinese characteristics can we realize national rejuvenation,” Xi said.

“It is perfectly right for history and the people to choose Marxism, as well as for the CPC to write Marxism on its own flag, to adhere to the principle of combining the fundamental principles of Marxism with China’s reality, and continuously adapt Marxism to the Chinese context and the times.”