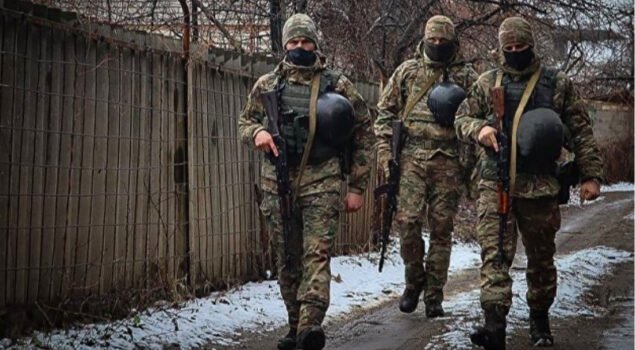 Could it be that under the Biden administration Kiev can easily be pushed to take the suicidal step of blockingthe Nord Stream 2 pipeline and dropping a new iron curtain between the EU and Russia/China? So asks contributor and analyst, Dmitriy Kovalevich in his March update on the situation in Ukraine, written exclusively for the New Cold War website.

The month of March has seen Ukraine and the Donbass republics living in anticipation of a new escalation of the military conflict. Almost all the media—on both sides—are reporting daily on the imminent resumption of full-scale hostilities, creating waves of fear and a sense of danger across society. The daily reports of those killed and wounded on the frontline have unfortunately, once again, become common. The Ukrainian army is returning heavy weapons, tanks, and artillery to the front line and similar movements are clearly evident on the other side.

The armies of the republics of Donbass are also on full alert.

In preparation for the escalation of hostilities, the Kiev authorities have begun to release neo-Nazis, previously arrested for crimes such as murder, torture and robbery. Just the same as seven years ago, the Kiev authorities require cannon fodder, which will have to be forced, like lambs to the slaughter, since the vast majority of ordinary soldiers, who have been drafted for military service, are far from willing to fight. In March, a Kiev court released the arrested militants of the Tornado battalion of the Ministry of Internal Affairs, who had been sentenced to nine years for murder, rape and torture.

Let us not forget that in 2014 the Tornado battalion of the Ministry of Internal Affairs was formed to fight against “pro-Russian separatists”. The recruits were from among criminals released from prisons, who were even given police ranks. The battalion soon became infamous for its particularly cynical atrocities and was later disbanded.[1] But now they are needed again. Ukrainian journalist Elena Gromova writes:

The justification of radicals, their transfer to house arrest and other indulgences, strengthen the position of nationalists and radical groups in Ukraine to reinforce their opinion that they can continue to impose their will on the country. And if it is true that Ukraine is preparing for active offensive actions in Donbass, then it is likely that these criminals will become an active cannon fodder in these actions.” [2]

Ukraine and Donbass at receiving end

Ukrainian political scientist Yakubin believes the escalation is a consequence of the exacerbation of relations between the United States and Russia, in which Ukraine and Donbass will be at the receiving end. “Any escalation between Russia and the United States, of course, will affect Ukraine. Yes, it may be a worsening of the general situation. Potentially, this will be deterioration in rhetoric which is to become more aggressive. As a result, we can come to a new escalation in the Donbass conflict,” said Alexei Yakubin.[3]

Analyzing the deteriorating situation, the Ukrainian edition of Strana claims that no negotiation formats are working anymore. “Now all sides of the conflict are in a deep political impasse, which is overlapped by the deterioration of relations between the US and Russia. This concerns even the negotiation formats that functioned under Obama and Trump—when special negotiators from the two superpowers used to consult. This no longer works. The chances of de-escalation are also nullified by the PR campaign of Ukraine’s Presidential Office, which is fighting “the fifth column of Moscow” [banning TV-channels]. Thus, Zelensky blocks for himself the opportunity to resolve any issues via personal contacts with Moscow. All this brings closer the danger of an even greater escalation in Donbass”, Strana writes.[4]

“Lack of understanding” could lead to conflict in third country

And Michael McFaul, former US Ambassador to Russia, said in an interview with the Russian opposition television Dozhd on March 17 that the misunderstanding between the US and Russia may lead to a conflict in a third country, which many see as an allusion to the Ukrainian conflict. McFaul says:

What scares me the most about the current US-Russian relations is the lack of understanding on both sides. This can lead to negative consequences, albeit not intentionally. Including even a conflict in some third country. We will disagree with the Putin regime in many ways. I think the disagreement will be very strong. I am not at all optimistic, I do not believe that there will be any new improved relations. But we can get into conflict because of misunderstandings and misconceptions”.[5]

Earlier, a Ukrainian opposition MP, Renat Kuzmin, made an announcement about Ukraine’s preparations for the war in Crimea and Donbass. He drew attention to a number of signs: representatives of Kiev refusing to comply with the Minsk agreements; bellicose calls are constantly being heard in the country; the General Staff are saying that it had begun preparations for street battles.“This is a real preparation for war”, the politician said, live on Ukraine’s TV-channel.[6] He also noted that the government does not close down TV channels that actively participate in the preparation of the war in the information sphere; spreading hate speech. However, on the other hand, it closed four TV channels that “are against all this savagery”.

The head of the Russian delegation to the Minsk negotiating group Boris Gryzlov said, referring to new shelling and fire, that “these are not accidental violations, but deliberate actions committed on the orders of the Ukrainian authorities.” The country’s troops are drawing up forces and equipment to the frontline in Donbass, while the rhetoric of Kiev’s representatives is getting tougher. According to him, the resumption of hostilities is expected after Easter.[7] 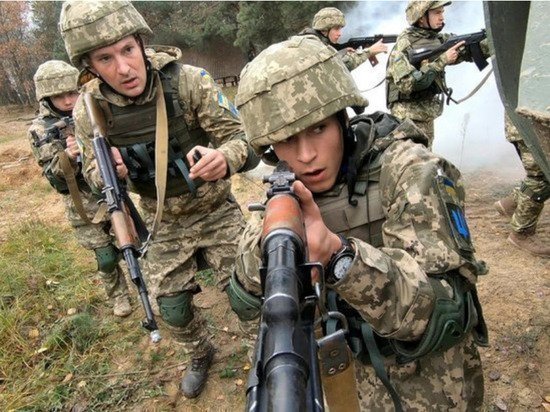 Meanwhile, NATO instructors are rigorously training Ukrainian troops for the resumption of hostilities. On March 11, the Commander of the Ground Forces of the Armed Forces of Ukraine (AFU), Colonel-General Oleksandr Sirsky, said that NATO instructors had trained thousands of Ukrainian soldiers, especially for urban combat and street fighting. 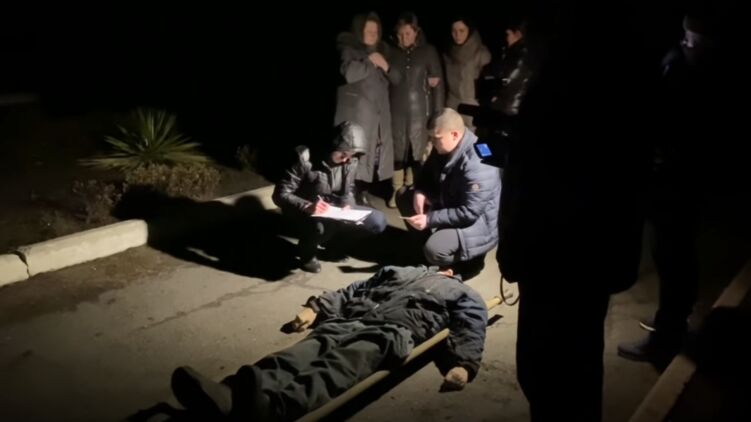 The deceased pensioner on the outskirts of Donetsk. Frame from video

Since 2015, NATO instructors have trained some 16,000 Ukrainian military personnel to fight in cities, Sirsky said.[8] In total, 19,000 Ukrainian servicemen have been trained. Obviously, this is about fighting in the urban areas of Donetsk and Lugansk. Furthermore, British instructors are training Ukrainian snipers, who are firing at the unrecognized republics’ civilians daily. For example, on March 23, a Ukrainian sniper killed a 71 y.o. man while he was feeding his chickens on the outskirts of Donetsk.[9]

Also of concern, on Wednesday, March 24, the American bulk carrier Ocean Glory entered the port of Odessa with 350 tons of military equipment for the Ukrainian army. And this may also bode some ominous preparations.[10] 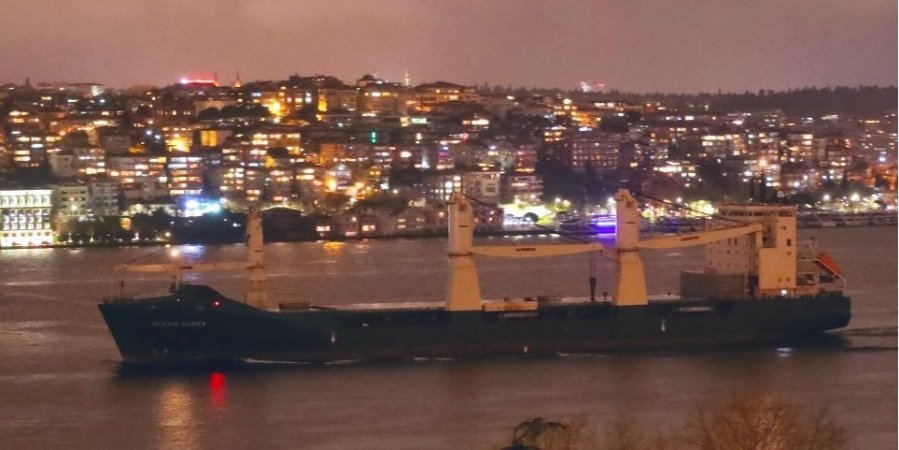 At a session of the UN Human Rights Council Hendrik Weber, head of the Norway organization, ‘People’s Diplomacy’ accused the official Kiev authorities of escalating the conflict in Donbass. Weber said:

Since 2016, I have made several trips to Crimea and the self-proclaimed Donetsk and Lugansk People’s Republics. I saw that a peaceful atmosphere reigns in Crimea and almost all people are happy with the reunification with the Russian Federation in 2014. However, the war continues in Donetsk and Lugansk. An entire generation of children are growing up traumatized by the war. Despite the Minsk agreements, the Ukrainian government and military formations continue to escalate the situation in recent weeks. Civilians and children on both sides of the frontline continue to suffer from this protracted seven-year war,” [11]

The Norwegian politician noted that only through direct dialogue it is possible to end this war. And he called on the UN High Commissioner for Human Rights to facilitate direct dialogue between the government of Ukraine and the LPR and DPR.

For seven years Kiev has refused to negotiate with representatives of the unrecognized republics. In March, a regular session of the negotiations was disrupted – the Ukrainian delegation left the online meeting due to the presence of a representative of the DPR on the other side. However, it is impossible to negotiate without the participation of one side of the conflict – it is the very essence of such negotiations. However, Kiev does not want to negotiate with the Russian Federation either. Oleksiy Danilov, Secretary of Ukraine’s NSDC, said on March 25 that any dialogue with Russia is an “unsafe step” for Ukraine, which could purportedly lead to the loss of statehood.[12]

If there is no desire to have any dialogue or negotiations, military escalation unfortunately becomes an increasingly likely prospect. It should be noted that Ukraine society has been kept in such a state of alert and intimidation for the past seven years. Nonetheless, with the change of the US administration, the new reality is that Kiev can easily be pushed to a suicidal step in order to block the Nord Stream 2 pipeline and drop a new iron curtain between the EU and Russia/China.