Major defeat for the US and its allies at the OAS, a victory for Evo! 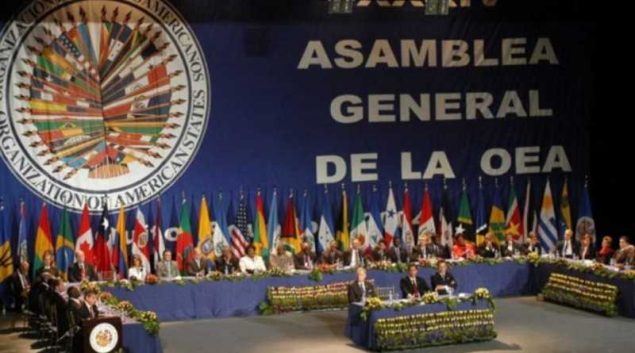 On December 18, in Washington, DC, the CARICOM (bloc of Caribbean states) resolution presented to the Organization of American States (OAS) reads as follows:  “Rejection of violence and call for full respect for the rights of indigenous peoples in the Plurinational State of Bolivia.”

On December 18, in Washington, DC, the CARICOM (bloc of Caribbean states) resolution presented to the Organization of American States (OAS) reads as follows:  “Rejection of violence and call for full respect for the rights of indigenous peoples in the Plurinational State of Bolivia.”

The Bolivian pro-US coup delegation, in order to stop the resolution from being adopted, claimed it could have been “more constructive and instead of supporting the intention of burning the country as Evo Morales wishes, and contribute to pacification.”

Granada began the meeting by pointing out that the Bolivian Project did not constitute amendments to the CARICOM Project, but a new draft Resolution. On the proposal of another small country, Belize, the Bolivian coup resolution was put to a vote.

The result of the vote on the Bolivian coup plotters’ project was as follows:

So, the Bolivian “government” project was rejected.

Then the ambassador of the United States proposed to vote on the draft Resolution of CARICOM, which resulted in the following, a bad surprise for the US and its OAS puppet Almagro:

Against 4: Bolivia, Colombia, USA, Venezuela (the representative of the self-proclaimed Guaidó).

As a result, the Resolution “Rejection of violence and call for full respect for the rights of indigenous peoples in the Plurinational State of Bolivia” was approved. Great news!

Despite millions of Canadian workers CUPE (680,000 workers), CUPW (54,000) OFL (one 1 million), UNIFOR (300,000) & CLC (3 million) in favour of Evo and opposed to the coup, Canada abstained on the CARICOM resolution at the OAS. This raises serious issues about democracy, not in the pre-Evo Bolivia, nor in current Venezuela, but in Canada!

Trudeau had to take this “neutral stand” (as opposed to his very possible preference to vote against the just CARICOM the resolution) probably as a result of the strong movement in Canada against the coup and in favour of Evo.

This opposition to the Trudeau government’s Bolivia policy was completely censured by Canada’s corporate media. However, Trudeau must have seen the writing on the wall and thus took the cowardly stance, increasingly a trade mark of his government and himself as a politician.

Canadians have to go further and push the Trudeau government to abandon the U.S. altogether.

The OAS result shows that the soft diplomatic approach to Trudeau does not work. Rather, only massive and explicit opposition to his polices holds any sign of hope.

Dare to say the “T” Word, which in Canada does not mean “T” for Trump, which is a no-brainer, but “T” for TRUDEAU!

The OAS resolution is also a defeat for the international and national pressures to smother the anti- U.S. Imperialist sentiment of the Canadian people, and thus convert it into pitiful apologists for the Trudeau government.

Thus, the conclusion is to attend all actions, events, sign letters and petitions that target the Trudeau government on the all issues in Latin America including Chile and Haiti.

Congratulations to the small country members of CARICOM: In many cases tiny islands but with the voice of a giant. They are always ready to speak out against U.S. imperialism, while huge, wealthy Canada is saddled with a pro-Trump government, faithful ally of US imperialism.