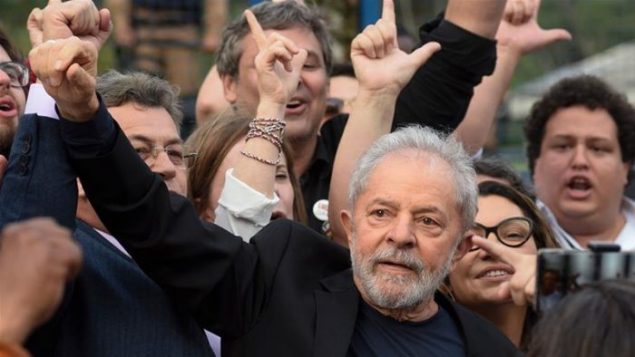 Former president Luiz Inácio Lula da Silva has been released from prison after being held for 580 days in solitary confinement. Ana Paula Vargas and Vijay Prashad reflect on the significance of this momentous event for Brazil and Latin America…

Just before 5pm on Friday the 8th of November, Brazil’s former president Luiz Inácio Lula da Silva walked out of his prison in Curitiba (Brazil). Lula went to prison in April last year on a 12-year sentence. Five-hundred and eighty days of prison are now over, as the Federal Supreme Court ruled that inmates who have not yet exhausted their appeals should not be held in prison.

In addition to Lula, about 5,000 Brazilians – mostly poor and black – can be released based on the Supreme Court’s decision. Many of them have not been previously afforded the presumption of innocence, and large numbers of them have been in prison without proper legal defense. 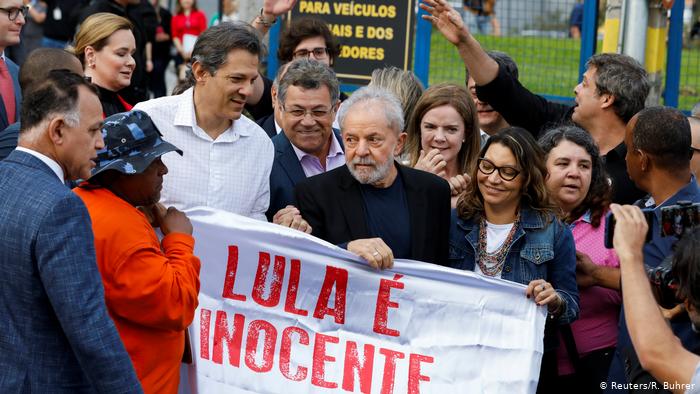 The Supreme Court verdict was not directed at Lula, but at the undemocratic nature of the judicial system which had held people in prison before they had exhausted their appeals. Lula’s situation mirrored that of these thousands of other prisoners. It was as part of a judicial criticism of the unjust system that Lula was able to be free.

But as Lula walked out of his cell and into the Free Lula encampment across the road from the prison, he signalled the importance of the Free Lula (Lula Livre) campaign of international solidarity that went from Curitiba across Latin America, and indeed across the world. From the Free Lula encampment across from his prison, comrades would hold vigils and wish him thrice a day with greetings of Good Morning, Good Afternoon, and Good Evening. Today, on November 8th, Lula was able to be greeted not by shouts of solidarity, but in person.

The solidarity campaign drew in jurists and intellectuals, politicians and celebrities, a range of people who felt that the imprisonment of Lula was unjust. What had become very clear was that the legal mechanisms had become a political instrument of the elite to attack the left politicians and left movements. The collaboration between the government prosecutor and Judge Sérgio Moro indicates that there was this weaponization of the Law – what is known as Lawfare – to prevent the Workers’ Party from winning elections, and to make sure that the Brazilian elites hold power. What ‘Free Lula’ meant was not only the freedom of Lula, but also an end to Lawfare as an instrument against the people.

Lula walked out of his cell, but the case against him – a case with little evidence – remains. Popular pressure will continue to completely annul this persecution of Lula. There is little doubt the Free Lula campaign will continue to mobilize support so that the courts declare that Lula is innocent and allow him his full political rights. The Operation Lava Jato was not just used to put Lula in prison, but to make sure that he – who is supremely popular in Brazil – cannot run for office again.

Lula’s popularity comes both from the positive aspects of his presidency (when his government abolished poverty and expanded educational opportunities) and from his leadership against the neoliberal and neofascist governments of Temer and Bolsonaro. Out of prison, Lula’s voice will once more sharply turn on the hideous politics of Bolsonaro. 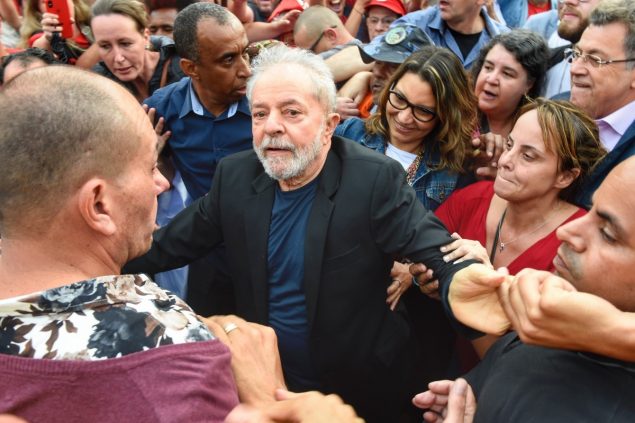 Luiz Inacio Lula da Silva is received by a crowd of supporters as he leaves the Federal Police building in Curitiba. Photo: Agencia Estado via Xinhua

Lula is to go to make a statement to the nation from the office of a trade union in São Paulo. This is where he belongs, inside a workers’ office, amongst the people. Lula emerged as a central figure of the Brazilian people during the historic strikes of 1978 and 1979, which played a key role in ending the military dictatorship in Brazil. It is from the workers’ land that he will make his stand. Over the course of the Free Lula struggle, it became clear that Lula was bigger than his political party – the Workers’ Party (PT) – and even bigger than Brazil’s left. He represents the Brazilian people – the people who are now struggling to maintain their homes in the favelas and in the encampments and in the settlements, struggling to hold onto the Amazon, struggling to study and heal, eat, and smile.

It must be chilling for Bolsonaro to watch the television and see Lula walk confidently out of his prison and into the political domain. Elections have brought the left back to power in Argentina, with the left retaining power in Bolivia. Even in Colombia, the left has made significant gains. Mass protests in Chile and Ecuador suggest the tide has turned in those two countries. Bolsonaro must know that the turn to the left in Brazil is imminent. The left now has its champion out on the streets.