From a report on the Facebook page of Ivan Katchanovski, Nov 20, 2015

The Prosecutor General Office of Ukraine officially confirmed during Poroshenko-ordered briefings this past week that the first three Maidan protesters that were killed in January 2014 were not killed from Berkut positions, as was claimed by the ‘Euromaidan’ leaders and much of the media but from Maidan-controlled areas from a distance of a few meters. (Report in ZN.ua.) 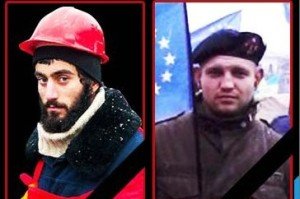 Serhiy Nigoyan and Zhiznevsky Senik were the first protesters killed on Maidan Square (photo on ZN.ua)

The investigation did not identify any suspects, witnesses, or videos of their killings. The GPU now suggests versions of their killing by plain-clothed police or by “agents provocateurs.” But the investigation still would not even consider a version that they were killed in a false-flag operation. (The story is reported briefly in Russian-language news here.)

The Security Service of Ukraine (SBU) also claimed this week that unknown provocateurs were responsible for the momentous December 1, 2013 attack on the presidential administration. This was done in spite of admissions by Right Sector leaders of the key role of this far right organization in the attack and various videos showing participation in this violent attack of far right organizations and activists including  the neo-Nazi Social National Assembly/Patriot of Ukraine members; football ultras; Dmytro Korchynsky, the Bratstvo leader and now commander of the Bratstvo-led St. Mary battalion of the Ministry of Internal Affairs; and Andriy Dzyndzia, who joined the NSA/PU-led Azov regiment after the ‘EuroMaidan’. 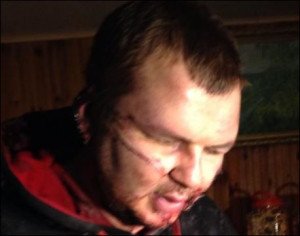 Dmytro Bulatov following his release on Jan 30, 2014 from a kidnapping

Similarly, the SBU officially confirmed that its investigation has produced no suspects and no leads in the widely publicized case of Dmytro Bulatov, who claimed that he was abducted and crucified for being one of the leaders of the Automaidan. But the investigation still would not confirm statements by other Automaidan leaders that his abduction and crucifixion were fake.[1]

Note:
[1] A Jan 31, 2014 report on Radio Free Europe concerning the kidnapping and release one week later of Dmytro Bulatov begins: “A prominent Ukrainian anti-government activist who disappeared more than a week ago has turned up in a village near Kyiv, saying that he was kidnapped and tortured by unknown men who spoke with Russian accents.”

” ‘It is very hard to see a way out the current crisis when such horrific abuses against protest organizers are taking place,’ Amnesty International said in a statement…”

Read also:
Ballistic reports and other new unreported revelations of the Maidan Massacre trial in Ukraine, by Ivan Katchanovski, on Facebook, Nov 18, 2015