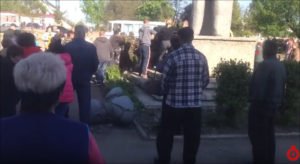 In the village of Lymanskoye in the Odessa region in southern Ukraine, a squad of neo-Nazis from the ‘Azov Battallion arrived to demolish the town’s monument to a founder of the Soviet Union and Soviet Ukraine, Vladimir Ilyich Lenin.  They damaged the monument before being chased away by village residents who chanted, “fascists! bastards!”

Watch the three-minute video at the weblink here, or by clicking on the screen here:

Another video report of the same confrontation is here on APN.