With ten days to go before April 23’s first round vote, the colourful, cultured and cantankerous far-leftist has the frontrunners on the defensive. Suddenly, the grumpy far-leftist — a showman in a Chairman Mao jacket who openly admired late Venezuelan populist leader Hugo Chavez — holds the mantle of France’s most popular politician.

In the course of a whirlwind month, the 65-year-old Mélenchon surged nine spots to number one in weekly glossy Paris Match’s opinion poll. A full 68 per cent of those surveyed hold “favourable opinions” of the far-left candidate, the poll by the Ifop-Fiducial firm showed. On some polls, Mélenchon has now bypassed embattled conservative François Fillon for third place in a presidential race that will see the top two advance to the May 7 run-off.

An Ipsos poll on Tuesday put Mélenchon a half-point ahead of Fillon for third place in the race, behind National Front leader Marine Le Pen and the independent centrist Emmanuel Macron. With 18.5 per cent, the far-leftist [sic] has gleaned 4.5 per cent in just two weeks, with Macron and Le Pen tied on 24 per cent…

Le Pen ready to be ‘crucified’ for France as she slides in polls, by John Follain and Helene Fouquet, Bloomberg News, April 14, 2017

Far-right candidate Marine Le Pen pulled all the stops to stem her slide in the polls, saying she’s willing to be “crucified” for her stance on absolving France for the wartime deportation of Jews, and pledging to protect the country from Islamic fundamentalists.

In a wide-ranging interview Friday on France Info radio nine days before the first round of the presidential vote, the 48-year-old anti-immigration candidate expressed disappointment at what she said was U.S. President Donald Trump going back on campaign promises, while focusing mainly on well-worn themes that most strike a chord with her electorate: Islam, immigration, national identity and terrorism…

In the radio interview, Le Pen maintained her contention that France had no responsibility for the 1942 roundup of Jews in and around Paris by French police at the request of the German occupying forces to be sent to concentration camps. The candidate, who first made that comment on April 9, was reverting to the long-established party line that shuns any hint of repentance…

The French far-right presidential candidate Marine Le Pen has denied that the French state was responsible for the wartime roundup of Jews at a Paris cycling track who were then sent to Nazi death camps… Le Pen told the LCI television channel on Sunday: “I don’t think France is responsible for the Vel d’Hiv.”

She added: “I think that, generally speaking, if there are people responsible, it’s those who were in power at the time. It’s not France.”…

It’s only a week to go before the first round [April 23] of the French presidential election and it seems that the race is wide open.  Only two candidates can take part in the second round in May.  But who will those two be?

Extreme right-wing Front National candidate Marine Le Pen has been the front runner in the polls over the last year, but her support has been slipping.  Ex-socialist minister and centrist darling of the bourgeois media, Emmanuel Macron is neck and neck with Le Pen, both at around 22-23%.  The official conservative (Republican) candidate Francois Fillon should be ahead, but he has been damaged by the expenses scandal of his wife and children getting huge government-funded salaries for parliamentary work which they did not do.  Even so, Fillon is getting about 18-19% share of those saying they will vote.  The big surprise in the last few weeks had been the rise of Leftist candidate Jean-Luc Melenchon, whose polling has leapt from 10-11% to around 19% now.  In so doing, the official Socialist party candidate, Benoit Hamon, has seen his vote slump to 6-7%…

Three analyses of the French election published in ‘Jacobin’:

The following three analyses of the 2017 French presidential vote were recently published in Jacobin, a leftist online publication in New York with strong anti-Russia bias in its choice of articles and commentaries.

Mélenchon’s election campaign has galvanized the Left by doing what Socialist Party candidate Benoît Hamon could not — making a clean break with the political center. 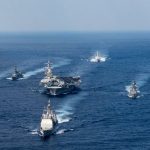 Trump boasts ‘we are sending an armada’ to Korean waters to eliminate N. Korean ‘menace’ as resurgent Japanese imperialism announces it is joining the show of forceMultipolarity 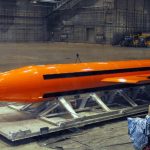 Crime against humanity as U.S. unleashes massive bomb on AfghanistanMultipolarity