From a video report on Ukrainian Channel 17, reported in Russian on Antifashist.com, Jan 28, 2016. Translation to English by New Cold War.org

Kyiv lawyer Tatyana Montyan, who represents Ruslan Kotsaba, a journalist from Ivano-Frankivsk arrested on Feb 7, 2015 for posting an antiwar video on the Internet, has returned from Brussels where she participated in a hearing and other meetings at the European Parliament on the case of her client. She spoke to journalists upon her arrival at the airport in Kyiv. You can watch and listen to her comments here on video in a five-minute interview (Ukrainian language). 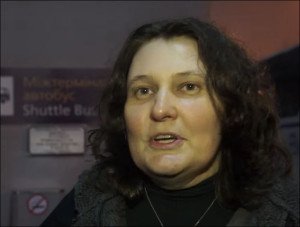 Attorney Tatyana Montyan speaks to journalists at Kyiv airport upon her return from Brussels on Jan 28, 2016 (YouTube)

Montyan says the goal of the January 26 hearing at the European Parliament and other meetings was to explain what is actually happening in Ukraine. She says her goal was met. In addition to the case of Ruslan Kotsaba, other troubling cases were explained during the hearing which characterize the difficult human rights situation in today’s Ukraine.

“For example, I said that the legal defenders of Hennadiy Korban are accused of conspiring with the alleged criminal activity of their client, which concerns us regardless of our own attitude to Korban. The Europeans were very surprised.

“Moreover, they could not believe that Ruslan Kotsaba is sitting in jail for a year merely for a statement he made by video on YouTube.”

“I also explained how a witness of the prosecution threatened Ruslan Kotsaba right in the courtroom, threatening to kill his children and his entire family. The judges just sat there smiling, treating it as some kind of joke.”

“The Europeans didn’t believe me, so I showed them a video of the trial. Ruslan complained to the judges and made a formal appeal to the court to prosecute the witness over his threats. The judges replied that there was no crime,” said Montyan. 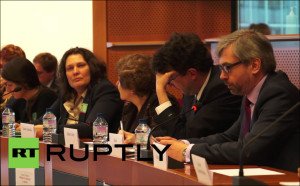 Hearing at the European Parliament on Jan 26, 2016 on human rights in Ukraine and the case of Ruslan Kosaba. Facing camera is Tatyana Montyan

Montyan also explained in Brussels the existence of the website ‘Peacemaker’. The Parliamentarians were very surprised to hear of a website that publishes the names, photos and other personal information of people who are guilty of nothing but are labeled as enemies of the people and “separatists”, humiliated and deprived of their civil rights.

“European parliamentarians were told by us of the economic ‘reforms’ taking place in Ukraine. It was news for them that standards of living have fallen threefold. They haven’t heard that we have armed men roaming the streets.

“Nobody ever explains in Europe the truth about what is actually happening in Ukraine,” said Montyan.

You can view a two-minute video clip of the January 26, 2016 hearing at the European Parliament on the state of human rights in Ukraine here. You can read the above article in Dutch language on the recently-launched Novoya Gazeta.