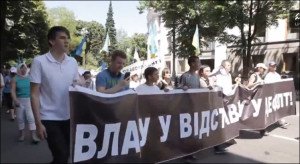 Antiwar protest and rally at U.S. embassy in Kyiv on June 17, 2015 (screenshot from Ok.ru)

An antiwar rally estimated at several thousands by sympathetic observers was held in the streets around the U.S. embassy in Kyiv on June 17.

A video report showing the large street protest can be viewed here (or click the screen below).  The main slogans of the rally, featured on many signs and banners, were ‘U.S. soldiers, get out of Ukraine’, “US = war” and “The U.S. has  occupied Ukraine”. Protesters also held photos and images of civilians murdered by Kyiv’s war in Donbas.

Some protesters were roughed up by police and by far-right nationalists of the ‘Maidan’ movement. A video by Politnavigator shows the police and rightists in action. This prompted some in the crowd to chant, “The U.S. doesn’t allow people to hold a peaceful rally!” The nationalists moved to silence the chants. 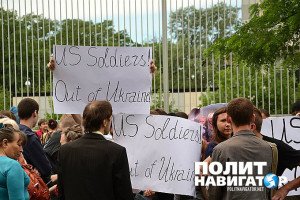 “We oppose the U.S. intervention into the affairs of Ukraine,” one of the coordinators of the protest, Svetlana Kravchenko, told journalists. “This leads to the violation of the Minsk agreements and the continuation of the war. We are an independent state and should resolve the issues within their country independently, without any help from American weapons and soldiers.”

A news report with many photos of the day’s action is published on Politnavigator, June 17, 2015. A translation of that report is published below. And here is a video by News Front of the June 17 action.

Rally in Kyiv June 22, 2015 to remember the Nazi Germany invasion of 1941 (Politnavigator)

Also reported in Politnavigator is news of a large rally in Kyiv on Sunday, June 22 by the recently-formed ‘Left Opposition’ political coalition. The rally marked the anniversary of the beginning of resistance to Nazi Germany’s invasion of the Soviet Union on June 22, 1941. The territories of Soviet Ukraine and Belarus were the first to suffer the Nazi invasion.

Police use force against protesters near the U.S. Embassy in Kyiv

Today in the Ukrainian capital, police used force against participants in an antiwar rally at the U.S. Embassy. 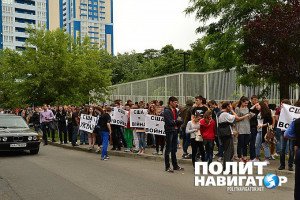 The action was organized under the slogan: “United States! Take your soldiers out of Ukraine and stop promoting war! ” It was organized by the Ukrainian public movement ‘Pravda’ (Truth). The demonstration gathered about 1000 people.

“We are opposed to US intervention in the affairs of Ukraine,” coordinator of the action Svetlana Kravchenko explained to journalists about the goals and objectives of the meetin. “This leads to disruption of the Minsk agreements and the continuation of the war. We are an independent state and should address issues within our country on our own, instead of using U.S. weapons and soldiers. ”

Participants held placards in Russian, Ukrainian and English languages, reading: “Yankee go home”, “U.S. soldiers, get out of Ukraine!”,  “U.S. = war”, “The U.S. has seized Ukraine”. People also held holding photographs illustrating the destruction of the Donbas and the death of civilians there.

The first clashes started as soon as the meeting started. A group of protesters – young people with posters and photos – came out into Sikorski Street to draw the attention of the drivers of passing cars. At first, the police not too zealously tried to persuade the protesters to leave the roadway. Soon, however, young men in camouflage uniforms without insignia intervened and began to shove the protesters, including women.

This tactic had little success. As soon as one group of protesters was back onto the sidewalk, another joined in. Also, people started to cross the street from one side to the other, blocking traffic. They chanted, “The United States will not allow us to hold a peaceful rally! Shame on the United States. Why not let us speak the truth?!”

Only some time later when law enforcement officers threatened to arrest people did the dust settle. Police and young people in camouflage blocked several groups with placards, holding them on the sidewalk and not budging.

Some passers-by tried to provoke the protesters, saying they were being paid to protest. “It was on Maidan Square where people were paid to sit or stand!” replied activists”

Despite the skirmishes and pressure by security officials, the rally lasted its scheduled two hours, until 2 pm. All the while, the protesters demanded that representatives of the Embassy come outside to receive a signed petition against the war and the perceived U.S. role. They chanted “Shame USA!” and “Yankee go home”. In the end, when they realized that no one from the EMbassy would be coming to meet them, they pasted the text of the petition to the entrance.

This is not the first action under such slogans at the American diplomatic mission. Worth noting is that many more journalists were on hand compared to the past, including several Ukrainian television cameras.

“Once, twice or three times, they can ignore us,” said the media coordinator of Pravda. “But little by little, the truth begins to open the way. Yes, and our people are not fools. They will see what has brought Ukraine to move under the actual control of Washington’s regional committee.”