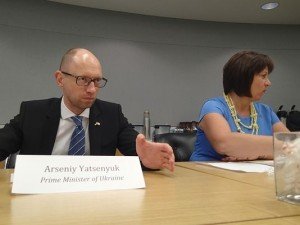 Last week, Ukrainian Prime Minister Arseniy Yatsenyuk and Finance Minister Natalie Jaresko visited Washington DC for several days. According to a report on Time.ua, the two had some 30 meetings with U.S. government officials and with U.S. and international financiers, including the managing director of the International Monetary Fund, Christine Lagarde. Below are reports pertaining to this visit.

Ukraine’s Prime Minister Yatsenyuk and Finance Minister Jaresko are on a U.S. trip to drum up weapons and money to crush the ethnic Russian resistance in the east – and they are finding a lapdog U.S. press that won’t ask them tough questions, reports Robert Parry.

There once was a time when the U.S. news media investigated U.S. imperial adventures overseas, such as Washington-sponsored coups. Journalists also asked tough questions to officials implicated in corruption even if those queries were inconvenient to the desired propaganda themes. But those days are long gone, as the Washington Post demonstrated again this week.

On Wednesday, the Post’s editorial board had a chance to press Ukraine’s Prime Minister Arseniy Yatsenyuk about the U.S. government’s role in the Feb. 22, 2014 coup that elevated him to his current post – after he was handpicked by U.S. Assistant Secretary of State for European Affairs Victoria Nuland, who declared “Yats is the guy” in a pre-coup intercepted phone call.

Wouldn’t it have been interesting to ask Yatsenyuk about his pre-coup contacts with Nuland and U.S. Ambassador Geoffrey Pyatt and what their role was in fomenting the “regime change” that ousted elected President Viktor Yanukovych and hurtled Ukraine into a civil war? Sure, Yatsenyuk might have ducked the questions, but isn’t that the role that journalists are supposed to play, at least ask? [See Consortiumnews.com’s “What Neocons Want from Ukraine Crisis.”]

Or why not question Yatsenyuk about the presence of neo-Nazis and other right-wing extremists who spearheaded the violent coup and then were deployed as the shock troops in Ukraine’s “anti-terrorism operation” that has slaughtered thousands of ethnic Russians in eastern Ukraine? Wouldn’t that question have spiced up the interview? [See Consortiumnews.com’s “Wretched US Journalism on Ukraine.”]

And, since Ukraine’s Finance Minister Natalie Jaresko was at the editorial board meeting as well, wouldn’t it have made sense to ask her about the propriety of her enriching herself while managing a $150 million U.S.-taxpayer-financed investment fund for Ukraine over the past decade? What kind of message does her prior work send to the people of Ukraine as they’re asked to tighten their belts even more, with cuts to pensions, reduction of worker protections, and elimination of heating subsidies?

How would Jaresko justify her various schemes to increase her compensation beyond the $150,000 limit set by the U.S. Agency for International Development and her decision to take court action to gag her ex-husband when he tried to blow the whistle on some improprieties? Wouldn’t such an exchange enlighten the Post’s readers about the complexities of the crisis? [See Consortiumnews.com’s “Ukraine Finance Minister’s American ‘Values.’”]

Yet, based on what the Post decided to report to its readers, the editorial board simply performed the stenographic task of taking down whatever Yatsenyuk and Jaresko wanted to say. There was no indication of any probing question or even the slightest skepticism toward their assertions.

On Thursday, the Post combined a news article on the visit with an editorial that repeated pretty much as flat fact what Yatsenyuk and Jaresko had said. So, after Yatsenyuk alleged that Russia had 10,000 troops on the ground inside Ukraine, the Post’s editorial writers simply asserted the same number as a fact in its lead editorial, which stated: “Russia … has deployed an estimated 10,000 troops to eastern Ukraine and, with its local proxies, attacks Ukrainian forces on a near-daily basis.”

Though both assertions are in dispute – with many of the cease-fire violations resulting from Ukrainian government assaults around the rebel-controlled Donetsk Airport – the Post had no interest in showing any skepticism, arguably one of the consequences from the failure to impose any accountability for the Post’s similarly biased writing prior to the Iraq War.

In 2002-03, editorial-page editor Fred Hiatt repeatedly declared as flat fact that Saddam Hussein possessed stockpiles of WMDs, thus supposedly justifying the U.S.-led invasion. After the invasion failed to locate these WMD stockpiles, Hiatt was asked about his editorials and responded: “If you look at the editorials we write running up [to the war], we state as flat fact that he [Saddam Hussein] has weapons of mass destruction,” Hiatt said. “If that’s not true, it would have been better not to say it.” [CJR, March/April 2004]

Yes, journalists generally aren’t supposed to say something is a fact when it isn’t – and when a news executive oversees such a catastrophic error, which contributed to the deaths of nearly 4,500 U.S. soldiers and hundreds of thousands of Iraqis, you might expect him to be fired.

On Ukraine – although the risks of neocon “tough-guy-ism” against nuclear-armed Russia could mean extermination of life on the planet – the Post refuses to present any kind of balanced reporting. Nor apparently will the Post even direct newsworthy questions to Ukrainian officials.

Prepare for serious turbulence in Russia, op-ed by Sergei Guriev, Washington Post, June 11, 2015
“The West should get prepared now for sudden and turbulent change in Russia.“

Washington Post editorial: The U.S. should send aid to democracy’s front lines in Ukraine, June 10, 2015
“What’s missing is a decision by Mr. Obama to make the defense of Ukraine a priority… A stronger U.S. commitment to Ukraine will not guarantee its success. But Mr. Obama’s lukewarm support risks a catastrophic failure for the cause of Western democracy.”

And read:
Ukraine leaders in U.S. speak of threat and opportunity, USA Today, June 10, 2015
“Prime Minister Arseniy Yatsenyuk said Russian President Vladimir Putin has thousands of troops in eastern Ukraine and is supporting a separatist movement because he ‘wants Ukraine to be a failed state’.” 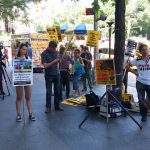 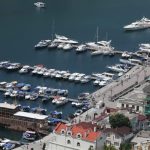