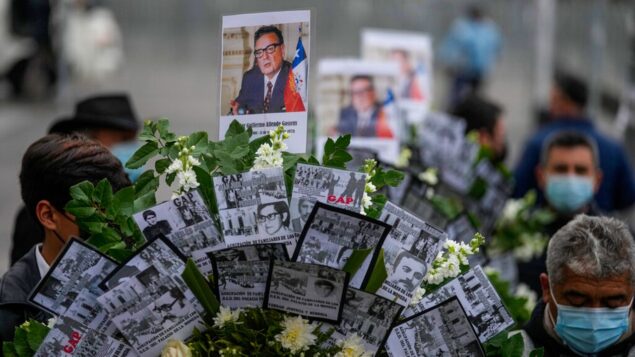 Declassified government documents, released from the National Archives of Australia in June, after a four-year legal battle, show that Labor Prime Minister Gough Whitlam eventually shut down the ASIS operation in April 1973, just five months before the coup. But that was only out of concern that if the public became aware of it, “he would find it extremely difficult to justify our presence there.”

One ASIS document, from December 1972, said the agency was using the British Embassy’s secure diplomatic pouch to transmit secret material to camouflage its activities in Chile.

These operations continued under the Whitlam Labor government, elected in December 1972, until April 1973, when Whitlam secretly ordered the then ASIS director, William Robertson, to shut down ASIS’ spy station.

Despite his knowledge of ASIS’ collaboration in the CIA’s preparation for a military coup, Whitlam kept this information hidden from public view, throughout these critical months, and continued to do so for the rest of his life.

Whitlam’s primary concern was to prevent “any publicity” about the Chilean operation, for fear of the popular reaction that would make it so “extremely difficult” for him to justify the ASIS-CIA collaboration. He told Robertson that was why he was “uneasy” about the ASIS operation.

Whitlam was also concerned to end ASIS’ participation in a way that would not disrupt the CIA’s ongoing activities to foment unrest and military coup plots against the Chilean government.

After the US Nixon administration failed to directly orchestrate a military takeover in 1971, its strategy to undermine the Allende government focussed on cultivating a “coup climate” by undermining the Chilean economy and conducting political disruption until the country became ungovernable.

In a meeting on April 1, 1973, Whitlam instructed Robertson to close down the station in a way that would not offend the CIA. Whitlam agreed to Robertson’s suggestions for phasing out operations. That involved returning management of the CIA’s Chilean informants to the CIA, disposing of station equipment, destroying documents or returning them to Australia, and repatriating the Australian agents in Chile, at which point clandestine activity would cease.

In an April 6 “note to file” recording the discussion, Robertson wrote: “The Prime Minister said that the last thing he wanted to do was to take precipitate action that would embarrass the CIA.”

This had caused Whitlam a “considerable amount of worry” because he was “very aware of the importance of this to the Americans” and they would interpret his decision as anti-American, “which it certainly was not.”

“He said that he was most concerned that the Americans should not believe that he, personally, necessarily disapproved of what they were doing in Chile, nor did he support Allende.”

Robertson wrote to ASIS’ Santiago station officers to explain that Whitlam was “most concerned that CIA should not interpret this decision as being an unfriendly gesture towards the US in general or towards CIA in particular.”

As a result of Whitlam’s “phase out” plan, ASIS operations continued for about three more months. On July 1, barely two months before the military coup, led by General Augusto Pinochet, the ASIS station in Santiago reported to Canberra that it had shut down and “all remaining station records etc. have been destroyed.”

If Whitlam had publicly exposed the CIA plotting, making it known to the working class in Chile, as well as in Australia and the US, that may well have prevented the coup.

The Chilean workers had repeatedly proved they had the capacity, courage and determination to defeat a military putsch. In June 1973, in response to an abortive coup attempt, workers seized factories but were sent back to work by Allende’s government.

Whitlam’s preoccupation was with proving that he did not support Allende’s supposedly “socialist” government, and more broadly with mending his fences with Washington, including over the Vietnam War and the US bases in Australia, such as the Pine Gap satellite spy facility.

The ASIS documents, first sought in 2017, were finally released in late June this year, to former Australian army intelligence officer and academic Clinton Fernandes, who is seeking to have further files declassified.

The National Archives of Australia is required to release most records after 20 years, unless they are “exempt.”

So sensitive and damning is the material, however, that the current Liberal-National government and the intelligence agencies are insisting, in closed tribunal hearings, that to even confirm or deny the existence of records of ASIS operations, including in Chile, would harm Australia’s “national interest.”

The case is currently before the Administrative Appeals Tribunal, but Attorney-General Michaelia Cash issued a “public interest certificate” opposing the release of the documents. This suppresses the release of any records from intelligence agencies, “because disclosure would prejudice the security, defence or international relations of Australia.”

Any disclosures could further expose the role of the Australian ruling elite’s partners. In the “Five Eyes” alliance, Australia’s agencies share files and cooperate with their counterparts in the US, Canada, New Zealand and the UK.

The Allende government was a popular front coalition that included his social democratic Socialist Party, the Stalinist Communist Party and the bourgeois Radical Party. It suppressed workers’ struggles and politically disarmed workers, falsely assuring them that the military would respect democracy.

At least 3,000 workers, youth and peasants were murdered on the first day of the US-orchestrated coup in Chile, September 11, 1973. Thousands more were rounded up, and held in Santiago’s National Stadium, along with other makeshift concentration camps throughout the country, where many were subjected to the most hideous forms of torture and executed.

During Pinochet’s brutal dictatorship from 1973 to 1990, anyone perceived to oppose the regime could be denounced, arrested, disappeared and executed. It is estimated that at least 50,000 out of a population of only 10 million were put to death by the fascist-military regime. Tens of thousands more were mprisoned and tortured. At least 200,000 people fled into exile.

The military dictatorship soon returned property, legally nationalised under Allende, to the US and other foreign multinationals. It abolished the right to strike and cut wage levels in half, within one year, while destroying millions of jobs.

In November 1975, for all his efforts to prove his worth to Washington, Whitlam’s own government was removed in a CIA-backed operation, driven by fears that the Labor government was unable to contain the working-class unrest in Australia, during this period of global turmoil.

The closest that Whitlam came to acknowledging the Chile operation was as opposition leader in 1977, after leaks from a royal commission that his government had initiated in 1975. He told parliament: “It has been written—I cannot deny it—that when my government took office Australian intelligence personnel were still working as proxies and nominees of the CIA in destabilising the government of Chile.”

Now the truth of that filthy work, and Whitlam’s role in covering it up, is starting to emerge.