Introductory note by New Cold War.org: The governing regime in Kyiv has responded to the transport blockade against Donbass by ultranationalist extremists that began several months ago in exactly the same way it responded to the blockade of Crimea by extremists in late 2015. First, the right-wing extremists mount a blockade, then after assessing the international response, Kyiv formalizes the extremists’ actions.

An additional twist to the Donbass blockade is that Kyiv claims the blockade is mounted in the name of respect for the Minsk-2 ceasefire agreement of February 2015 which Kyiv has consistently violated since it was signed.

The final, predictable piece of the narrative will be when Western governments and their media say that “all sides” in the civil war being waged by Kyiv in eastern Ukraine should de-escalate the conflict and implement–you guessed it–the Minsk-2 ceasefire. (The text of the Minsk-2 agreement is here.) 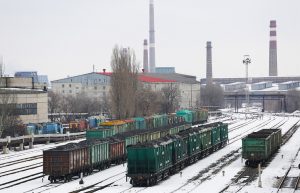 KYIV – Ukraine’s National Security and Defense Council has decided to suspend all transport services with the territories of Donbass not controlled by Kiev, the council’s head, Alexander Turchinov, said at the meeting of the presidential administration.

“Taking into consideration that Ukraine’s enterprises have been seized and the security situation has worsened in the zone of the anti-terrorist operation, the National Security and Defense Council has made a decision to suspend movement of cargos through the contact line,” he said.

“Following a decision by the National Security and Defense Council, all highways and railroads leading to the line of disengagement will be blocked today at 1pm (2pm Moscow Time) by the National Police and the National Guard,” he said.

Turchinov said the ban will be in force until points 1 and 2 (ceasefire and withdrawal of weapons) of the February 2015 Minsk peace deal are implemented and the seized enterprises return to Ukraine’s jurisdiction,

Ukraine’s Interior Ministry, National Police, National Guard and Security Service have been ordered to halt all movement of cargos through the contact line by rail links and vehicles.

Speaking at the Security and Defense Council meeting earlier in the day, President Pyotr Poroshenko called to suspend all transport links with Donbass.

According to Ukrainian political scientist Andrei Zolotaryov, the stakes are rising over the situation around Donbass