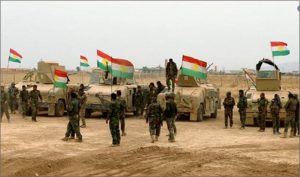 The Kurdistan regional government based in Erbil offered to “freeze the outcome of the referendum that was held in Iraqi Kurdistan” on September 25, where more than 91 percent of voters supported the idea of independence. The regional government also offered an “immediate cessation of fighting and every kind of military operations in the Kurdistan Region,” as Iraqi government troops and pro-government militias continue to assert control on the oil-rich region after launching a military campaign earlier this month to seize territory from the Kurds.

In a matter of days, Baghdad took control over the city of Kirkuk and the surrounding regions and moved on to capture territory that the Kurds previously regained from Islamic State (IS, Daesh, formerly ISIS/ISIL) terrorists. While the Iraqi advance faced very little resistance, clashes with Peshmerga Kurdish forces have been widely reported in the region.

“The dangerous situation and tension that faces Iraq and Kurdistan forces all of us to live up to the historical responsibility and to not allow the situation to lead to further war and confrontation between the Iraqi forces and the Peshmerga,” the Erbil government said in a statement early Wednesday, as quoted by Rudaw news.

Noting that “aggression and the confrontation” between Iraqi forces and the Peshmerga have resulted in “bloodshed” on both sides of the conflict, the authorities in Erbil noted that a “war between the two sides will not have a winner.” Instead, the Kurds proposed starting “an open dialogue” with the central government guided by the Iraqi constitution.

Baghdad has yet to respond to the Kurdish proposal.

The UN has already stated that it is ready to assist in the dialogue between the two governments “if requested”.

“We are confident that the Government of Iraq and the Kurdistan Regional Government, just like they banded together to defeat Daesh, can work hand in hand to overcome their differences through dialogue and away from confrontation to resolve all outstanding issues in a manner that is consistent with the Constitution,” Jan Kubis, the head of the UN’s mission in Iraq said Tuesday. Kubis suggested that both parties should start their reconciliation effort by establishing security in the disputed areas, while “respecting the integrity of the Green Line of 2003” before starting talks within the framework of the Iraqi constitution.

Turkey is gloating over the humiliating defeat of Iraqi Kurdish peshmerga fighters in Kirkuk by forces attached to Baghdad following the independence referendum held by the Kurdistan Regional Government (KRG) on Sept. 25.

U.S. and European opposition to the referendum in the name of preserving Iraq’s unity also pleased Ankara. Russia’s ambivalent position, however, was noted with silent disapproval.

Following the referendum, Moscow underscored its “unwavering commitment to the sovereignty, unity and integrity” of Iraq, according to a press statement issued by the Foreign Ministry. Moscow also added, however, that it “respects the national aspirations of the Kurds,” which is not what Ankara wanted to hear.

Speaking to the Kurdish daily Rudaw a few weeks before the referendum, Russian Foreign Minister Sergey Lavrov said, “The desires and legal goals of the Kurds must be fulfilled like that of all other peoples.”

He added for good measure that the Kurds should “express their aspirations through a peaceful mechanism,” and that the goals of the referendum should also be “done peacefully … taking into account the view of Iraq’s neighbors.”

The key issue for Ankara, despite Moscow’s “unwavering commitment” to the unity of Iraq, is that Russia is not opposed to Kurdish political aspirations. Any form of self-rule, even under a federal or confederal system, is seen as a threat by Turkey, which fears the effect it will have on its restive Kurds.

Another disturbing development for Ankara was the agreement that Rosneft, Russia’s main oil company, concluded with the KRG last week to take control of 60% of a central oil pipeline in northern Iraq and to increase its investments in the region to $3.5 billion.

This was arrived at over Baghdad’s head, after the KRG’s referendum, and flies in the face of Turkish threats to isolate and blockade the KRG by sealing Turkey’s borders with northern Iraq, in order to force Erbil to revoke the results of the referendum.

Retired Ambassador Unal Cevikoz believes this move by Russia has greatly undermined Turkey’s interests in northern Iraq. Speaking to Al-Monitor, Cevikoz said Ankara’s weakness is that, unlike Moscow, it lacks a long-term vision for the region.

Cevikoz also argued counter-intuitively, given the official thinking in Ankara, that the repossession of Kirkuk by Baghdad will enhance the Iraqi Kurdish drive for more self-rule.

“Russia and others can argue now that Baghdad has taken back what it wants and should therefore leave the Kurds alone in their territory,” Cevikoz said.

Ankara is also trying to gauge the implications of Moscow’s policies in Iraq for the future of Syria and the Kurds there who already enjoy support from Russia, in addition to strong U.S. backing.

Cevikoz said Ankara and Moscow “are not on the same wavelength” in Syria, despite their apparent cooperation there. Turkey’s insistence on preserving Syria’s territorial integrity, for example, is predicated mainly on its desire to see a strong central government that keeps Kurdish aspirations at bay.

Turkey is especially opposed to the Kurds who are operating under the banner of the People’s Protection Units (YPG) and the Democratic Union Party (PYD) having any say regarding the future of Syria. Turkey says these are terrorist groups linked to the outlawed Kurdistan Workers Party (PKK).

Speaking to Al-Monitor off the record, a Western diplomat said Russia would also like to see the strong central administration in Syria that Turkey wants, but knows it has to be realistic about this.

“Turkey’s dilemma is that the ethnic, religious and sectarian enmities that exist in Syria today make some form of federal solution the only way the country can preserve its unity,” the diplomat argued. “It is doubtful that a strong central administration that has control over the whole country can emerge at this stage.”

Ankara was already unhappy when Moscow produced a draft constitution for Syria earlier this year at the first meeting in Astana, where Russia, Turkey and Iran initiated a new peace process for Syria. Moscow’s draft proposed autonomy for the Kurds.

Nevertheless, Ankara remains largely silent about Russian policies it dislikes. The obvious reason is that the rapid deterioration of its ties with the West has exponentially increased its dependence on Russia.

Murat Yetkin, the editor-in-chief of Hurriyet Daily News, pointed to the conflicting situation that Turkey finds itself in with Russia. “Many in the Turkish media are happy to slam Israel and the U.S. over support for the Kurdish independence referendum, which would divide Iraq and have the potential to do the same to Turkey, but very little is said on Russia’s stance,” Yetkin wrote in his column Sept. 28.

Moscow, unlike Washington, refuses to see the PKK as a terrorist organization and has allowed the PYD to keep a representative in Moscow, which is also not mentioned much by Ankara. Nevertheless, remarks by President Vladimir Putin last week regarding his vision for Syria’s future were received with some alarm.

Addressing the Valdai International Discussion Club in Sochi, Putin said, “There is an idea to call a congress of the Syrian people, bringing together all ethnic and religious groups, the government and the opposition.” He said this would happen after the de-escalation zones established in Syria — with Russian, Turkish and Iranian participation — were successful. Putin said the next phase would be drafting a new constitution, adding, “This is roughly the plan.”

Putin’s spokesman Dmitry Peskov told reporters later that the proposed congress is being actively discussed, even though it was premature to say anything about timing and venue.

Developments in Syria have speeded up with the liberation of Raqqa by the U.S.-supported Syrian Democratic Forces, which is comprised mainly of YPG fighters. The situation in Idlib, on the other hand, is relatively stable after Turkish forces moved into the city under a joint Russian-Turkish-Iranian plan to establish de-escalation zones.

If this trend continues, the idea that Putin is floating about an all-Syria congress could come to the agenda faster than expected.

Ankara is also aware that Washington is not averse to autonomy for Syrian Kurds either, as long as this is within a unified Syria. Putin said in Sochi that they were “maintaining stable cooperation” with the United States in Syria, despite their differences, adding that there were “more positive than negative elements” in this cooperation.

Yetkin believes Moscow is trying to push for strengthened Kurdish autonomy in Iraq and Syria, along Turkey’s borders. “If that position comes to be supported by the United States, it could cause even bigger problems between Ankara and Washington than already exist,” according to Yetkin. He added, however, “It is deeply ironic that Moscow’s stance on Kurds in Iraq and Syria does not seem to be creating any new problems between Turkey and Russia.”

There are big obstacles to overcome before the congress Russia proposes can be convened. Difficulties in overcoming these may appear to be to Ankara’s advantage, since this will also delay work on drafting a new constitution that mentions Kurdish rights.

Prolonging the conflict, though, would enable the Kurds to further consolidate their gains in Syria with U.S. and Russian support, leaving Ankara in a potential lose-lose situation. Unless, that is, Ankara accepts the “Kurdish reality” and determines its policies accordingly.

Some government supporters in the media, like Osman Atalay from the Islamist daily Yeni Akit, believe that Ankara should cooperate with Baghdad to ensure that the KRG can enjoy greater autonomy, if not independence, for the sake of Turkey’s broader interests.

Such a policy shift, however, would have to happen while President Recep Tayyip Erdogan prepares for elections in 2019. This means that, true to his nature, he will be relying heavily on nationalistic discourse to garner support, which is likely to further offend Kurds everywhere and thus increase international sympathy for them.

Turkey’s Kurdish headache seems unlikely to subside anytime soon, despite the gloating in Ankara over the KRG’s humiliating defeat in Iraq.

Russian Foreign Mnister Sergei Lavrov on the situation in northern Iraq, response to a journalist’s question in Sochi, Russia on Oct 16, 2017

Question: Russia has good relations with Iraq and Kurdistan. Currently, there have been clashes between Kurdish forces and volunteer fighters who support the Iraqi leadership. What is Russia’s position on this issue? Is Russia ready to help the leadership of Iraq and Kurdistan organise negotiations?

Sergey Lavrov: Our position on the clashes is negative. We believe that this contradicts the interests of all the people of Iraq, including the Kurds. We want an agreement to be reached as soon as possible on how all the people who currently live in Iraq will continue to live in a single state.