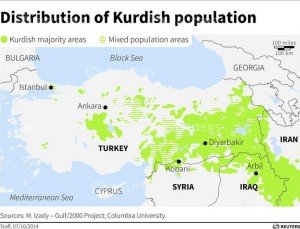 Map of Kurdish populations in the Middle East

The final resolution of the meeting, titled “Declaration of political resolution regarding self-rule”, was read by DTK co-chairs Selma Irmak in Kurdish and Hatip Dicle in Turkish. It has been translated by ANF English service below.

The resolution called attention to the historic and important process in the Middle East, which involves Kurdistan and Turkey as well, that is today being through a deep chaos caused by global capitalism harming the peoples of Anatolia, Mesopotamia and Middle East.

DTK remarked that the questions of national identity, freedom and democracy remain unresolved as a result of economic, social, cultural, political and military developments, which on the other hand bring about an emergence of new alternative democratic models to replace the failed structures of the past.

The final resolution recalled that Kurdish people have declared self-rule in some towns after the renouncement of the Dolmabahçe Agreement that had been reached through İmralı talks; initiation of a war, ground and aerial operations against guerrilla areas; suppression of peoples’ most legitimate and democratic demands by use of force. 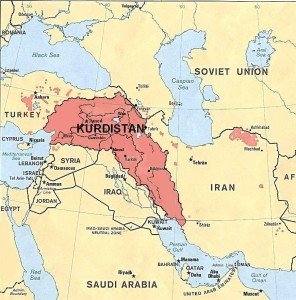 DTK also drew attention to the fact that people have started to defend the areas of self-rule by means of trenches and barricades in the face of the attacks and assassination attempts aimed at civilians, youths and politicians under the cover of “public security”.

“The rightful resistance mounted by our people against the policies that degrade the problem into trenches and legitimate state terror over this point, is essentially a demand and struggle for local self-governance and local democracy. The Kurdish people have started a process of struggle based on self-force after the rejection of their demand for legal and political status. This struggle is predicated on a sense of democratic politics and governance, co-existence and achievement of a democratic resolution to the Kurdish question on the basis of political status.”

DTK said this is therefore a matter of democracy and freedom that can be settled only through dialogue and political negotiation, remarking that re-initiation of talks and consequently Kurdish leader Abdullah Öcalan’s freedom is essential in order for such a process to be started and endured.

DTK underlined that the democratic autonomy system, which had previously been conveyed to public opinion by their side and also involved by HDK, DBP and HDP in their manifesto, will also ensure a resolution to the Kurdish question on a democratic basis.

“The areas where people have declared self-rule are being targeted with tanks, artillery attacks as well as thousands of police and soldiers for months now. These attacks which intend a mass killing and intimidation of people do not only cause casualties but also destroy our historical-cultural heritages and places of worship. On the other hand, the Kurdish people are stepping up the resistance in the areas of self-rule. This resistance is grounded on a rightful and legitimate basis and it will definitively triumph. Those targeting this resistance will, on the other hand, be tried before the democratic Turkey, history and humanity.”

The final resolution stressed that; “We as DTK embrace the declarations of self-rule by people’s assemblies and this rightful and legitimate popular resistance in all areas. We consider it essential that the Kurdish people and all peoples of Turkey join and support this resistance as part of the struggle for democracy and freedom. This is a matter of democracy rather than a trench and barricade problem like the AKP government asserts. The aggressive policy of the AKP is intended to break the popular will for local democracy and a free living. Today we are facing the problems caused by the failure to come up with a democratic and political resolution to the Kurdish question.”

The final resolution said that evaluations and discussions at the DTK general meeting ended with an agreement to own and develop the concept of self-rule, recognize the legitimacy of individual and collective self-defense against the policies of war and violence, and initiate a concurrent process of social construction.

DTK stressed that the matter of democratic autonomy for the resolution of the Kurdish question cannot be treated independently from Turkey’s democratization which -it added- will not be possible unless a political and social system based on democratic autonomy is created.

In the “Declaration of political resolution regarding self-rule”, DTK listed the following 14 points as steps to be realized in order for the resolution of political, social and administrative problems with regards to the subjects of democratic autonomy, self-rule and local democracy;

2- Governance of all these autonomous regions and cities by self-governance bodies elected from assemblies formed on a democratic essence, and within the scope of basic principles of Turkey’s new democratic Constitution;

Representation of autonomous regions at TBMM (Grand National Assembly of Turkey) and the centralized administration on the basis of democratic principles.

3- Ending of any kind of tutelage by the centralized administration on democratic autonomous regions, other administrative units and the elected -excluding only inspections according to the new democratic constitution-;

Elimination of the authority to discharge the elected from position.

4- Securing the participation of town, neighborhood, village, youth’s, women’s and faith groups’ assemblies within autonomous regions in the processes of decision-making and supervision.

5- Advancement and expansion of democracy, equal representation of women in assemblies, all decision-making mechanisms and stages of self-governance in order for the attainment of a free and democratic living;

Granting of authority for women to form assemblies, communes and social structures in case of need;

Approval of women’s assemblies on all the decisions concerning women; recognition of women’s right to a free and autonomous organisation in all areas.

6- Participation of youths in decision-making and self-rule mechanisms.

7- Arrangement of education by self-administrations;

Provision of education in all mother tongues besides Turkish;

Recognition of languages other than Turkish as official.

8-Provision of opportunities for works and studies in the fields of language, history and culture;

Organisation of places of worship as autonomous institutions,

9- Provision of healthcare and medical services by autonomous administrations.

10-Re-arrangement of the judicial system and legal services in accordance with the Autonomous Region Model.

11-Authorization of autonomous regional administrations for the operation and supervision of land, water and energy sources, and production sharing,

Formation and development of production and operation units in all areas such as agriculture, husbandry, industry and trade in accordance with the general democratic constitution principles;

Backing, promotion and donation of all individual and collective initiatives in this regard.

12- Provision and supervision of land, air and sea transport by autonomous administrations;

Arrangement of traffic services by local authorities in accordance with the related centralinstitutions.

13- Assignment of local budget to autonomous regional administrations in order for the provision of cited services;

Collection of some taxes by self-governance units in devotion to the agreements and principles of equity decided with the central and other local administrations;

Granting by the central government of a share from the total tax revenue to local administrations,

Realization of necessary precautions by the central administration to eliminate the difference in the level of development in local regions.

14- Establishment of official local security units under the governance of autonomous regional administrations, arrangement of a coordinated work between local and central units of security and defense.

DTK said this declaration is a dynamic discussion and a quest of reconciliation, and is open to proposals and criticism.

In order to pave the way for Turkey’s democratization, DTK invited all the democratic and libertarian circles of the society, political parties, individuals, opinion leaders, faith groups and establishments to support this rightful and legitimate struggle of the Kurdish people.

DTK also called upon all social circles and political parties in Kurdistan, as well as all the world peoples to be in solidarity with the Kurdish people’s fair demand for freedom.