The Russian Justice Ministry has announced that a long-awaited prisoner exchange between Moscow and Kiev has been called off.

Russian Justice Minister Alexander Konovalov told the RIA Novosti news agency on Tuesday that the deal would only go ahead if Savchenko served the punishment given to her by the Russian court in her native Ukraine.

“The prisoner transfer process is a long one,” said Konovalov. “It doesn’t happen on the basis of an exchange. It’s the same international process the Russian government follows with any country it has a bilateral agreement with. These transfers often fall through.”

While a more informal prisoner exchange can be arranged through diplomatic channels, the practice doesn’t come under Justice Ministry jurisdiction, he said.

Following talks in late April, Ukrainian President Petro Poroshenko had announced in media interviews that Savchenko would be “returning home in a few weeks.”

More recently however, Alexandrov’s and Yerofeyev’s lawyer had told reporters that an exchange seemed unlikely. “[For the exchange to happen,] Ukraine needs to recognize Savchenko’s verdict and Russia needs to do the same with Erofeyev and Alexandrov,” said lawyer Olga Sokolovskaya in an interview with Radio Free Europe. “It’s obvious that neither side will do that.”

Savchenko was given a prison sentence of 22 years by a court in Rostov on charges of involvement in killing Russian journalists in eastern Ukraine. Alexandrov and Yerofeyev were sentenced to 14 years by a court in Kiev for “participation in armed aggression against Ukraine” in the Donbass region.

Read also:
Lawyer: No release for Savchenko before end of May, Interfax, April 25, 2016

Ukrainian servicewoman Nadiya Savchenko, who has been given a 22-year sentence in Russia, is unlikely to be able to return to Ukraine within a month, her lawyer Mark Feygin has said. “Most probably, Savchenko will not be released either before Easter or by the end of May. Don’t listen to gossipers,” Feygin wrote on Twitter on April 25.

He said he was visiting the detention facility where Savchenko is being held.

Feygin wrote on Twitter earlier that the return of his client to Ukraine might take a while.

Ukrainian President Petro Poroshenko said he had agreed on the preliminary timeframe of Savchenko’s transfer to Ukraine in his telephone conversation with Russian President Vladimir Putin.

The Donetsk City Court in Russia’s Rostov region found Ukrainian servicewoman Nadiya Savchenko guilty of conspiracy to murder Russian journalists Igor Kornelyuk and Anton Voloshin in June 2014 for reasons of hatred and sentenced her to 22 years in a general penitentiary on March 22. The court also convicted her of attempted murder and illegal crossing of the Russian border. The sentence took effect on April 5.

Lawyer Ilya Remeslo summarises the process in the case of Nadezhda Savchenko and considers options for further developments. Ilya Remeslo is a legal consultant for ‘Rossiya Segodnya’ media outlet in Russia…

For several reasons, there are not so many options for a prisoner exchange of Savchenko. Firstly, there is a moral aspect. Savchenko is charged with complicity in the murder of two citizens, while the Russian prisoners Yerofeyev and Alexandrov held by Ukraine did not kill anyone. They are accused of “terrorism”, i.e. of participation in hostilities as part of an illegal armed formation. Obviously, this exchange cannot be considered adequate.

Secondly, whatever Savchenko told about her discharge of military duty in Donbass [eastern Ukraine], the Ukrainian leadership has not declared a war nor imposed martial law. In fact, the Ukrainian authorities have committed war crimes by using their armed forces in time of peace against their own people. Accordingly, Savchenko has no status of a prisoner of war and the rules and the mechanisms of conventions for the exchange of prisoners of war do not apply to her. Therefore, the exchange is possible only in the plane of the criminal process, in two versions: either a pardon or a dispatch for completion of sentence in Ukraine… 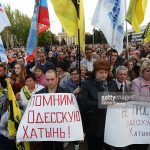 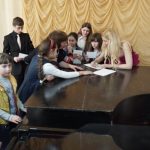 Feature interview with pianist Valentina Lisitsa in Donetsk: ‘They have threatened me many times’Feature Articles, Ukraine