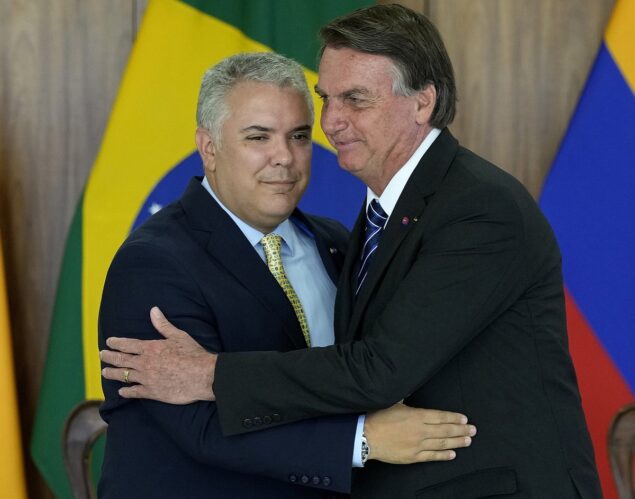 Colombia’s Duque along with Chile’s Piñera and Brazil’s Bolsonaro form the core of an alliance defending US interests in South America. Bolsonaro and Duque both face 2022 re-election campaigns amidst falling popularity and a left wing resurgence.

Colombia’s Duque along with Chile’s Piñera and Brazil’s Bolsonaro form the core of an alliance defending US interests in South America. Bolsonaro and Duque both face 2022 re-election campaigns amidst falling popularity and a left wing resurgence.

Colombian President Iván Duque, one of the leaders of the far right in Latin America and an ally of the United States, recently travelled to Brazil for an official visit and fulfilled a political and economic agenda, meeting with ideological fellow traveller, president Jair Bolsonaro.

Duque stated that the bilateral relationship with Brazil is “at its’ highest point” and highlighted points that he believes are common among the neighboring nations, such as the growing commercial relationship and the defence of private initiative, in addition to the preservation of the Amazon.

The far right leaders share several things in common, but one of the most problematic from a geopolitical point of view is their subservience to the United States and willingness to work for its imperial interests in Latin America, this is especially evident with Venezuela. Also present are efforts to use the history of armed struggle in Colombia, and longstanding conspiracy theories surrounding it, to connect the Workers Party (PT) of former president Luiz Inácio Lula da Silva to drug trafficking.

Bolsonaro also highlighted the “good relationship we have in defense matters where the president (Duque) expressed his interest in renewing his fleet of training aircraft belonging to the Super Tucano family”, manufactured in Brazil.

Iván Duque, announced in 2019 the objection to items that make up the statute by which the Special Justice for Peace is operating, a body created through the agreement that ended the confrontation between the Colombian State and the FARC guerrillas, the Revolutionary Armed Forces of Colombia.

On February 18, the Special Jurisdiction for Peace (JEP) reported that the Colombian Military Forces killed at least 6,401 civilians between 2002 and 2008 whom they presented as combat casualties, which became known as the “False Positive Scandal”.  A much higher figure than what had been presented in the past. Seven days later, President Iván Duque spoke on the matter. During the Peace with Legality Seminar held on February 24, the president said that he hopes that no more speculation will be derived from the information given by the JEP.

Duque effectively ignored the killings and gave veiled support for them to continue. This is extremely similar to the position Bolsonaro has about militia activities in Rio, and death squads in the favelas.

The Colombian president addressed issues such as the production of vaccines against the coronavirus, protection of the Amazon, combating the effects of climate change, and paying particular attention to migrants and border security – again an attempt to rattle Venezuela.

The presidents said that both countries of the Amazon region will arrive together at COP 26 (United Nations Climate Conference), in Glasgow, Scotland, in defense of the forest.  Bolsonaro defended the sovereignty of the “dear, rich and desired” Amazon, while Duque, who also defended the sovereignty of the forest, defended preservation in his speech.  “The Amazon is, for us, a very valuable territory and we take care within our sovereignty.  It is also very important that this defense brings with it an effective fight against environmental crimes”, said the President of Colombia.

Duque said that the countries in the region should bring to the climate conference, which starts on October 31, a unified message on forest protection and defended the need to reduce greenhouse gas emissions.  Bolsonaro, in the same line, defended that the nations arrive together at COP 26.

The “rich and desired” Amazon is far from being Bolsonaro’s priority. In 2020, the official deforestation data was the worst in the last 12 years.  The Bolsonaro government has faced criticism on its environmental policy since the beginning of his administration in 2019.

In September 2019, Brazilian Minister for Foreign Affairs Ernesto Araújo met then US Secretary of State Mike Pompeo in Washington D.C. and the pair announced a new U.S.-Brazil bilateral agreement to open up the Amazon Rainforest to private sector development. Araújo called the agreement “…the Holy Grail of Brazil’s foreign policy, at least for the private sector”.

During the current government, deforestation in the Amazon registered historic highs. Bolsonaro calls it a “fine industry”. The area deforested in the year (10,851 km2) reached a level similar to that of 2008. It is the 2nd worst result of the historical series started in 2015. The number is 4.5% lower than the same period ended in July last year, when the indicator reached the record of 9,216 km2. Bolsonaro advocates for mining on indigenous lands and suspended the Amazon Fund, a project financed by Norway and Germany, that earmarked resources to be applied in the preservation of the forest.  He has already had three indictments filed against him at the International Criminal Court in The Hague for the destruction of the forest, the last one last week. Brazilians often say that it is necessary to develop the legal Amazon region, an area through which the forest passes and occupies 58.9% of the national territory. The situation in the neighbouring country is also calamitous, Colombia was named the most dangerous country for environmentalists for the second year in a row, 227 were murdered in the country last year.  To a lesser extent, Colombia has seen deforestation grow.  According to official data, there was an 8% increase in deforestation in the Colombian Amazon in 2020, compared to the previous year.

Both leaders have a hostile stance towards indigenous peoples. Duque’s actions to stop the killing of indigenous peoples was considered insufficient even by the United Nations, and the Colombian himself has already made offensive statements regarding the mobilizations, linking the Minga to terrorist and criminal activities. The Articulation of Indigenous Peoples of Brazil (Apib, in Portuguese) filed a complaint to the International Criminal Court (ICC), a United Nations (UN) justice agency, to denounce the government of Jair Bolsonaro for genocide.

Among the criminal actions denounced by Apib are Bolsonaro’s explicit refusal to demarcate new indigenous reservations, his attempt to legalize invasions, and his encouragement to conflicts in the countryside by using bills, decrees, and ordinances.

Two peas in a pod

In an interview with Folha de São Paulo newspaper Ivan Duque said: “I will tell you what I saw in President Bolsonaro: first, a person who has an appreciation and affection for Colombia;  who worked with Colombia and carried out public policies so that there is more investment, exports and so that ties with other nations are strengthened.I also see him promoting Brazil abroad to generate more investment, exports and well-being.  That’s what I can tell from the way I worked with him.”

There are several parallels between their respective mandates. For starters, their approval is similarly low. Duque has 20% and Bolsonaro, 22%, according to Datafolha and Ipec. The two are also expected to leave the post next year. Another commonality is that they both bet on the attempted overthrow of Venezuela’s Nicolás Maduro in early 2019.

One day after his visit to Brazil, Ivan Duque received the US Secretary of State, on his first visit to South America. Just like Bolsonaro, Ivan Duque had a close relationship with the far right president Donald Trump, and the focus of the visit was not so much on the military aspects but also other topics, like climate change and “human rights” but of course, the Secretary used the opportunity to reaffirm how valuable the partnership with Colombia is for the United States. Even though Bolsonaro was snubbed by the US Secretary of State, his is already collaborating on undermining the progress of the left in Latin America. Besides Colombia, Blinken visited president of Ecuador, banker Guillermo Lasso, who came to power amid a smear campaign which baselessly linked his leftist rival Andrés Arauz to Colombian paramilitaries, and said: “There’s something important to be learned from Ecuador, Colombia, and the region in understanding the challenges facing democracies and how to overcome them.” 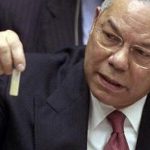 The Many Crimes of Colin PowellMargaret Kimberley, US aggression, USA 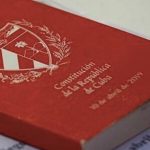