(The LA Times op-ed commentary below was posted on Russia Insider with the following introduction.)–The author here takes time off to pander to anti-Russian biases. He speaks of “genocidal policies” of “Josef Stalin’s Russia”, tying up Stalin, genocide and Russia. Actually, the state which Stalin (a non-Russian) ruled over was the multinational Soviet Union, which was as Ukrainian as it was Russian, and which killed Russians and Ukrainians alike. The author claims Western Ukrainians “never forgot” Stalin’s “genocidal policies” alluding to the Requisition Famine of 1932-33, but the truth is Western Ukrainians never experienced it. At the time, Western Ukraine was part of Poland and was not affected. The famine caused deaths in Central and East Ukraine, Crimea, Russia’s Northern Caucasus, and the Volga region of Russia.

In mid-December, President Obama signed into law the Ukraine Freedom Support Act, which, among options for more sanctions against Russia, calls on the White House to provide Kiev with assistance for internally displaced persons as well as to cooperate with international organizations to distribute aid in Ukraine. 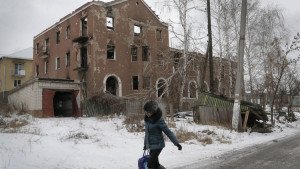 Such aid is sorely needed in eastern Ukraine. Much of the infrastructure of Donetsk and Luhansk — the main cities in the Donbas region — has been destroyed, coal and food supplies are disrupted, and Kiev froze government pension and other payments to the region in November. With brutal winter conditions approaching, risks of starvation and death are becoming too real. As the United Nations and Amnesty International put it, a humanitarian crisis is looming.

Unfortunately, recent statements by Col. Oleksiy Nozdrachov, Ukraine’s chief of military and civilian cooperation in eastern Ukraine, show disturbing signs of Kiev’s attitude toward this crisis. Where the U.N. sees a looming humanitarian disaster, Kiev may see an opportunity.

Kiev’s strategy, as outlined by Nozdrachov in USA Today, is to continue withholding government services from the rebel-held areas in hopes that increased suffering will turn the local population against the separatists. “This shows the population in the occupied territory that the situation under the Ukrainian government is much, much better,” Nozdrachov said. In addition, an Amnesty International report posted Dec. 24 said pro-Kiev “volunteer battalions are increasingly blocking humanitarian aid into eastern Ukraine in a move which will exacerbate a pending humanitarian crisis.”

These actions are reprehensible. Kiev, and most of the world, rightly views the petty warlords in control of Donbas as illegitimate entities. However, if a gunman takes over an office building, no police department in the United States would condone withholding basic necessities from the hostages in the hope that they would rise up and vanquish the perpetrator. Providing aid to civilians trapped in a standoff is not appeasement or negotiation with terrorists; it is a fundamental principle: preventing needless loss of life.

Any decision to use the tragic situation in eastern Ukraine as a weapon is not only morally repugnant, but it also will surely have negative repercussions for Kiev. The strategy may help force the rebels to capitulate and allow Ukrainian President Petro Poroshenko to establish nominal control over the region. But Ukraine is a land where grudges run deep. Western Ukrainians have never forgotten the genocidal policies of Josef Stalin’s Russia (which, incidentally, employed hunger as a weapon); the Russian-speaking residents of Donbass are not likely to forgive Kiev for starving them into submission. Anger at Kiev, and the West, will continue to simmer in Donbass. And that is a problem.

Ukraine cannot afford to have Donetsk and Luhansk solidify into a permanent conflict zone such as Transnistria in Moldova and Abkhazia and South Ossetia in Georgia, regions where long-standing enmities fester, preventing true national unity in those countries. Ukraine has long been teetering on the brink of economic collapse. Turning it around will be an enormous undertaking by the most optimistic of estimates; doing so without the industrial centers and natural resources of Donetsk and Luhansk may be impossible. Ukraine’s best chance to beat back economic disaster is to move forward as a united nation, and to do that, it needs to win back the eastern Ukrainians.

That presents a challenge, which cannot be overcome by simply regaining territory and planting a Ukrainian flag. Eastern Ukraine is separated from the rest of country by a cultural, linguistic, and even religious, divide, with one of the two major Orthodox churches aligned with Kiev and the other with Moscow. It is a blurry divide, running through towns, sometimes through neighborhoods and families. Until last year, it was not an insurmountable barrier to national unity — if that were the case, Ukraine would have split apart in the early 1990s, as did Yugoslavia and Czechoslovakia. But after 4,700 deaths in eastern Ukraine and Crimea, more than a million displaced persons and continued fighting, the chasms have deepened.

On Monday, Poroshenko announced that he would meet Jan. 15 with representatives from France, Germany and Russia to discuss a peace settlement for Ukraine. Ukraine, he said, cannot win back Donbas militarily. In Moscow, Russia announced that it would continue to supply oil to Ukraine, and over the weekend, prisoners were exchanged between Kiev and rebel forces in separate peace talks in Minsk. These are welcome moves, but for the millions of pensioners and other civilians in Donbas, will the resolution they portend — a resolution that has been so far been elusive — come fast enough?

Lev Golinkin, who was born in the former Soviet Union — in the city of Kharkov, which is now part of eastern Ukraine — is the author of the memoir “A Backpack, a Bear, and Eight Crates of Vodka.” He lives in New Jersey.