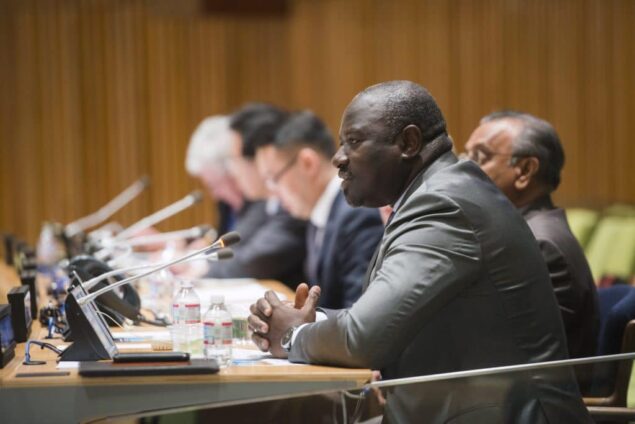 The 10th Nuclear Non-Proliferation Treaty (NPT) Review Conference—a meeting normally held every five years—was intended to celebrate the cornerstone treaty’s 50th year. But United Nations officials postponed the April 2020 event due to the onset of the COVID-19 pandemic. Then, as coronavirus cases rose in October 2020, the United Nations delayed the conference again, setting August 2021 as the new target date. Enter the delta variant, which pushed the gathering back to January 2022.

The 10th Nuclear Non-Proliferation Treaty (NPT) Review Conference—a meeting normally held every five years—was intended to celebrate the cornerstone treaty’s 50th year. But United Nations officials postponed the April 2020 event due to the onset of the COVID-19 pandemic. Then, as coronavirus cases rose in October 2020, the United Nations delayed the conference again, setting August 2021 as the new target date. Enter the delta variant, which pushed the gathering back to January 2022. When the omicron variant emerged in late 2021, the NPT member states set a new target date for some time between August and September 2022.

The review conference’s repeated logistical nightmares are unfortunate. But they are not the conference’s only—or even greatest—challenge. Non-nuclear member states condemn the lack of progress towards disarmament. Crises and brinksmanship between nuclear-armed member states have eroded trust. Even when nuclear and non-nuclear member states share goals—such as promoting nonproliferation—they often disagree about how to coordinate with other treaties, such as the Treaty on the Prohibition of Nuclear Weapons, which complicates progress. If the NPT member states hope to tackle grave, global security problems, they must, at the very least, come together. After four delays, the possibility of a successful review conference seems as elusive as the actual date the meeting will take place.

Advancing nonproliferation. The NPT was designed to stop the spread of nuclear weapons, but experts argue over its influence. Negotiations over the Iran nuclear deal are faltering. China’s nuclear arsenal is expanding. North Korea continues to test ballistic missiles. The Comprehensive Test Ban Treaty, which would help stymie nuclear proliferation, has not entered into force due to a handful of holdouts, including the United States. In a recent Foreign Affairspoll, nearly half of nuclear experts anticipate that the number of states with nuclear weapons will increase over the next decade.

Some scholars argue that NPT signatories only include those states that either had already decided not to or had no reason to build nuclear weapons. Barbados, for example, would be a poor candidate for nuclear weapons development with or without NPT ratification. Meanwhile, four states—Israel, South Africa, India, and Pakistan—acquired nuclear weapons while not members of the NPT regime. (South Africa later relinquished its nuclear arsenal and ratified the NPT.)

The prevailing view in US national security circles is that arms control agreements are “unreliable, worthless, unsuccessful, [and] possibly even counterproductive,” Steven Miller, director of Harvard’s International Security Program, wrote in 2003. Arms control agreements struggle to manage the disparate interests of strategic competitors; cheating and difficulties with verification and enforcement are continuing concerns. Several states—including Libya, Iran, Iraq, and North Korea—have been accused of seeking nuclear weapons while maintaining their NPT membership. Among these, only North Korea has withdrawn from the NPT, subsequently building an arsenal of nuclear weapons.

Other scholars believe that the NPT constrains nuclear proliferation. In this line of reasoning, the treaty creates a more peaceful playing field by ensuring that adversaries do not build nuclear weapons. In some cases, vulnerable states may even have received nuclear security guarantees or conventional weapons technology as “inducements” to join the NPT.

Importantly, the NPT allows the International Atomic Energy Agency (IAEA) to inspect and monitor states for signs that they intend to build nuclear weapons. States are less likely to cheat knowing that the IAEA may detect noncompliance and the UN may impose sanctions. With the help of the NPT, the United States and Soviet Union coordinated their nonproliferation strategies to effectively coerce their allies into abandoning their nuclear ambitions.

To its credit, the NPT, as a cornerstone agreement of the global nonproliferation regime, has been instrumental in shaping a nonproliferation norm. That is, some states may avoid building nuclear weapons so as not to be labelled irresponsible members of the international community.

Today’s security environment calls for a renewed commitment to nonproliferation. No country alone can reverse adverse developments in Iran and dissuade others from seeking nuclear arsenals. Effective nonproliferation efforts must be global. But distrust among NPT members may prevent the necessary coordination.

This “nuclear apartheid,” as one Indian official called it, has been lamented by nuclear and non-nuclear states alike. Countries that acquired nuclear weapons after the creation of the NPT claim that the treaty attempts to impose an oppressive and hierarchical international order. Meanwhile, non-nuclear weapon states deride the failure of the five permanent members of the UN Security Council (P5) to make their promised progress towards denuclearization.

This debate highlights the crux of the challenge that the NPT Review Conference—whenever it finally occurs—will face. Amidst rampant discontent from non-nuclear weapon states about lagging progress on denuclearization, scholars and commentators worry that the conference will end in stalemate. The member states are unclear about whether, and how, to coordinate between the NPT and the Treaty on the Prohibition of Nuclear Weapons. If tensions don’t improve before the rescheduled conference, the member states risk failing to reach a consensus on pressing global nuclear security concerns.

Signs of progress or shallow promises? Aware of concerns about the sustainability of the grand bargain, the nuclear weapon states have worked to show their continued commitment to the NPT. On January 3, the P5 released a joint statement, reaffirming the 1985 Reagan-Gorbachev declaration that “a nuclear war cannot be won and must never be fought.”

This marks the first time Britain and France have joined such a statement, and their inclusion could have been instrumental in the decision to also declare that nuclear weapons “should serve defensive purposes, deter aggression, and prevent war.” Against the backdrop of ongoing tensions over Ukraine, this language reiterates the importance of US extended deterrence to NATO.

That the P5 could agree to a joint position on nuclear weapons is notable. Still, experts’ and policymakers’ worries that Ukraine represents an “existential threat”—as Russia’s ambassador to the United States called it—exemplify the significant remaining nuclear security issues. The nuclear powers face many barriers to building trust, including China’s nuclear build-up, contestation over intermediate-range nuclear missiles in Europe, developments in hypersonic missiles, and increased military cooperation between Russia and China as well as Russia and India.

The P5 appear to understand the importance of managing nuclear threats. These states released a working paper in December on strategic risk reductionthat expressed their commitment to reducing the threat of nuclear war. The paper promised transparency in nuclear doctrines and highlighted the importance of improving crisis prevention and crisis management strategies. However, the paper did not identify a concrete plan to achieve those goals.

Although President Biden secured promises in 2021 from Presidents Putin and Xi to consider conducting strategic stability dialogues with the goal of advancing nuclear peace, he has made little progress on talks with China. Meanwhile, he faces a “difficult and complex” landscape in talks with Russia moving forward.

And the joint statement, while a promising start, similarly represents little material progress towards disarmament. The statement acknowledged an “ultimate goal of a world without nuclear weapons,” but it did not repeat stronger language from earlier review conferences that reaffirmed denuclearization as an “unequivocal undertaking.”

The nuclear states did not agree to freeze or reduce their nuclear arsenals. They did not agree to limits on nuclear delivery capabilities, including nuclear cruise and hypersonic missiles. They did not recognize the Treaty on the Prohibition of Nuclear Weapons. No doubt their potential collaboration has been challenged by the COVID-19 pandemic. But to change the dangerous status quo on consequential nuclear security concerns and to avert a stalemate, the NPT member states should—at least—figure out how to meet.

Lauren Sukin is a MacArthur Nuclear Security Postdoctoral Fellow at Stanford University’s Center for International Security and Cooperation and an incoming Assistant Professor of International Relations at the London School of Economics and Political Science. Her research examines the role of nuclear weapons in alliances, crisis politics, and public opinion. She holds a PhD and MA in political science from Stanford University and ABs in political science and literary arts from Brown University.