U.S. Secretary of State John Kerry’s visit to Sochi has the potential to change the tone in U.S.-Russia relations and turn down the tensions provoked by the so-called “information war” – but only if both sides act quickly.

Many regard U.S. Secretary of State John Kerry’s visit to Sochi, where he met with both Russian President Vladimir Putin and Russian Foreign Minister Sergey Lavrov, as the first positive sign for U.S.-Russia relations in quite some time. Keep in mind – top-level U.S. officials haven’t visited Moscow for the last two years, ever since the start of the Ukraine crisis. Nonetheless, how much of this optimism about Kerry’s visit will turn into real action? 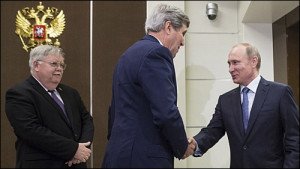 The resumption of face-to-face dialogue between the U.S. and Russia is good in and of itself. During four hours of talks with Putin, the U.S. Secretary of State had a chance to touch upon a broad range of issues – from Ukraine to Syria and Yemen. Moreover, the Russian expert community and media noted Kerry’s changing tone with respect to Ukraine and sanctions.

At the same time, much of this positive spin about the meeting is wishful thinking, of course. None should expect dramatic changes in the U.S. policy towards Russia, since the reasons for the current “mini Cold War” are much more fundamental.

There is no Russian lobby in the United States, for example, and the amount of business ties between the two nations is minimal. Moreover, the Russian establishment is full of people who are critical, if not downright antagonistic, with respect to an “old enemy” – the U.S., which in turn, does not trust the Russian leadership.

Besides, the United States is rapidly approaching the 2016 election campaign, so the window of opportunity (even if U.S. President Barack Obama were thinking about some positive shifts at the end of his term) is closing rapidly. Russian decision-makers understand it quite well and can hardly be convinced to talk seriously with an outgoing head of state.

Moreover, deeds speak louder than words. Kerry was much more decisive in his statements in Ukraine and at the NATO ministerial meeting in Antalya, Turkey. The United States continues to provide military support (fortunately, not arms supplies yet) to the Ukrainian government and back “defensive” initiatives of the East European nations.

Unlike Obama, Russian President Vladimir Putin will stay in power. And there is a high probability that he will stay for another ten years, realizing that the West appears to be searching for a new strategy with respect to Russia.

Visits by German Chancellor Angela Merkel and Kerry come after Russia’s Victory Day, which was marked by the unprecedented presence of China in the Russian media and national political discourse. They very much resemble the attempts to tread water and to test the potential for compromise with Russia in the future.

The most productive line in this regard would be to return to an honest and straightforward pragmatic dialogue, which has recently been replaced with loud statements about moral principles in politics. Such statements may sound fine for the ears of the Western voters, but the Russians regard it as a disguise for dirty intentions and treat them as such.

Kerry’s visit is not yet the launch of a “new reset,” but its potential may be used, at the very least, to slightly change the tone in U.S.-Russia relations

Thus, Kerry’s visit is not yet the launch of a “new reset,” but its potential may be used, at the very least, to slightly change the tone in U.S.-Russia relations and turn down the tensions provoked by the so-called “information war.” However, for any serious developments there should be a quick follow-up, otherwise the effect will be extremely short.

The opinion of the author may not necessarily reflect the position of Russia Direct or its staff.

Read also:
Kerry’s Sochi Visit: Is the US Backpedaling on Crimea?

I’m not buying John Kerry’s nice talk in Sochi. Not yet, at least.

It’s been two days since his tête-à-tête with Vladimir Putin at the Black Sea resort, and so far, there’s been no obvious volte-face on the apparent Russia-strategy rethink. But while there’s cause for a healthy dose of skepticism, there’s also cause for (very) cautious optimism.

Kerry didn’t exactly bring a ‘reset’ button, à la Hillary Clinton in 2009, but he did bring with him a new and notably cheerier demeanor.

Whether the talks marked a true turning point in this so-called ‘new Cold War’ it is too soon to tell — but what is obvious, no matter which way you spin it, is that the talks marked a turning point at least in Washington’s own mentality about the Ukraine crisis. Giving up on its principles and various ‘red lines’ is not something that comes easily to the White House, nor to any administration anywhere — but sometimes it has to be done.

Crimea presents one such situation.

The fact that Kerry didn’t mention the ‘annexation’ of the Crimean peninsula during his press conference following talks with Putin has not gone unnoticed and is perhaps the most telling sign that the US sees itself facing an impasse on that particular dispute.

Of course, we don’t know what Kerry said behind closed doors — but up until now, he has never missed an opportunity to publicly pull out the Crimea card, so the fact that he didn’t can likely only mean one thing: Barack Obama’s administration is beginning to realize that for relations to improve enough to keep Russia on side where its help is needed (IS, Iran), they will at some point be forced to give up on Crimea, if for no other reason than the fact that it is ultimately a dead-end argument.

Essentially, Washington will give up on Crimea because Russia never will.

Obama knows that. Kerry knows that. Victoria Nuland and her cookie-distributing crew know it. It’s just a matter of figuring out how to accept it and move on with minimal embarrassment.

After so much tough talk and hysteria, Washington is highly unlikely to publicly accept or recognize the will of the vast majority of Crimeans. Perhaps they never will. But there are bigger fish to fry in the world and the Crimea question will slowly fizzle out until it seems like no one in the West really cares much about where Crimea does or doesn’t belong. For Russia, the result will ultimately be Crimea and (no) Punishment.

No doubt Kerry’s trip to Sochi rattled some feathers in Kiev. Petro Poroshenko is probably feeling irked by it all — but what he hasn’t seemed to grasp is that he is ultimately irrelevant in comparison to Putin and Russia and that the extreme nationalism and fanaticism on display in his country right now won’t sit well with the freedom-loving West forever.

In fact, after Crimea failed to make an appearance, the second-most significant element of Kerry’s visit to Russia was the fact that he gave a rare public warning to Poroshenko, telling him to “think twice” before reigniting the conflict in the east. This is the first real acknowledgement from Washington that there are two sides in this war, and that the blame can’t be placed entirely at the door of the separatists or the Kremlin.

At the end of the day, what we saw with Kerry in Sochi was the inevitable result of a failed policy.

Washington tried to pull off some great geopolitical chess move in Ukraine — and failed miserably on every count. The sanctions which were meant to cripple the Russian economy and weaken Putin’s domestic support had only a minimal effect on the economy (compared to the designed intent) and had a polar opposite effect on Putin’s popularity; The economy has proved remarkably resilient in the face of what some have called outright ‘economic warfare’ — and Putin is more popular than ever. One can only imagine the surprise and bewilderment inside the White House as this all began to play out.

Furthermore, the inflammatory rhetoric designed to isolate Russia from the rest of the world also proved to be a failure, with Russia turning to its many alternative international partners — from Turkey, to India, to China and Brazil.

The Obama administration vastly overestimated the strength of its hand in Ukraine and underestimated Russia’s ability to withstand whatever was thrown at it — at least this time. As such, US policies have been a disaster from start to finish and at some point, that’s going to have to sink in.

Unfortunately, even if this change in tone does signal a substantial change in tack, it could very well be short-lived. Given the acrimonious relationship between Hillary Clinton and Vladimir Putin, we could see another famous ‘reset’ if she wins the presidency next year. But this time the mis-translation on the button may well be the more appropriate word to use from the outset.

I don’t know if a year and a half of Obama trying to back-pedal on Ukraine to save face and bring a bit more warmth into the big freeze of 2014-15 would be enough to make Hillary and Vlad kiss and make-up. The pair have traded insults at quite an unusually personal level for two people trained in the fine art of diplomacy.

For its part, Western media has largely been uncharacteristically reticent on exactly what Kerry’s visit means — perhaps, because like the rest of us, they really don’t know — although they’re not usually as shy to speculate.

If Kerry’s cordial tone in Sochi really does mean change is afoot in Washington-Moscow relations, the mainstream American media may eventually find they need a way to wriggle out from under the piles of propaganda they’ve been bombarding people with for the past two years without making it look like a loss for their team.

They may even need to take a moment to reconsider their evangelism for the anti-Russia cause in general. But given the time and energy they’ve put into this narrative, they’re not likely to give it up easily. Whatever happens, rest assured they’ll find a way to spin it as a win for Obama.

Kerry may yet backtrack on the small bit of progress made in Sochi this week — at this point it’s all a guessing game — but if he does, it should be clear by now, that it will be more to America’s detriment than Russia’s.

Danielle Ryan is an Irish journalist and blogger. She has a degree in Business and German from Trinity College Dublin and studied political reporting at the Washington Center for Politics and Journalism in Washington, DC. 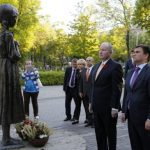