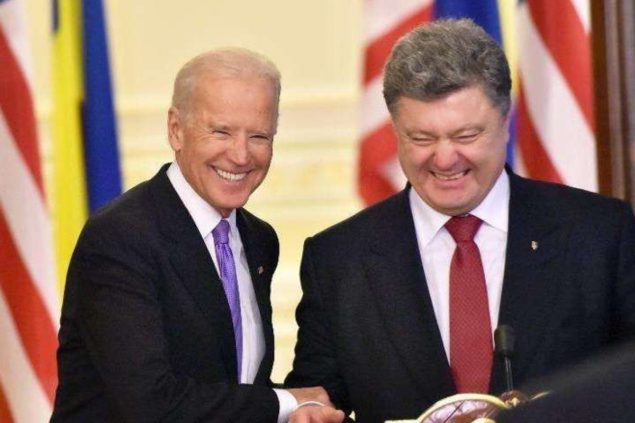 Our regular contributor on Ukraine, Dmitriy Kovalevich, writes another exclusive report for the New Cold War website.  This month he writes about the environmental disaster and corruption surrounding illegal logging in the country’s primeval Carpathian beech forests, details of which were published this month in the latest Earthsight report. He also lays bare the violence being perpetrated by neo-Nazis against Ukrainian opposition on the country’s city streets and concludes that not only the terror but also the massive deforestation and the looting of national natural resources, is taking place either under the control or with the permission of the US Democratic Party.

Further reading: Carpathian Mountains are being rapidly stripped of forest cover: Who is covering up this barbarous deforestation?

Quarantine has been slightly eased in Ukraine during June: public transport has resumed and cafes, restaurants, markets and gyms have reopened. Protest activities and mass rallies have also started again. This immediately led to a new outbreak of Covid-19; nevertheless, the lifting of quarantine measures are continuing.

According to the data, on June 24 Ukraine became the country with the second highest number of new Covid-19 cases in Europe [1]. Overall, since the outbreak of the epidemic, Ukraine has had 41,117 cases of coronavirus, 1,086 of them fatal, while 18,299 patients have recovered, as of June 26 [2]. The largest number of cases is in the country’s western regions, which is associated with the massive flow of labour migrants to and from EU countries. Despite quarantine, thousands of people gathered [3] at border points in western Ukraine, attempting to get to jobs in Poland and other EU countries. There can be no discussion of any safety measures and sanitary conditions for these crowds at the check-points. 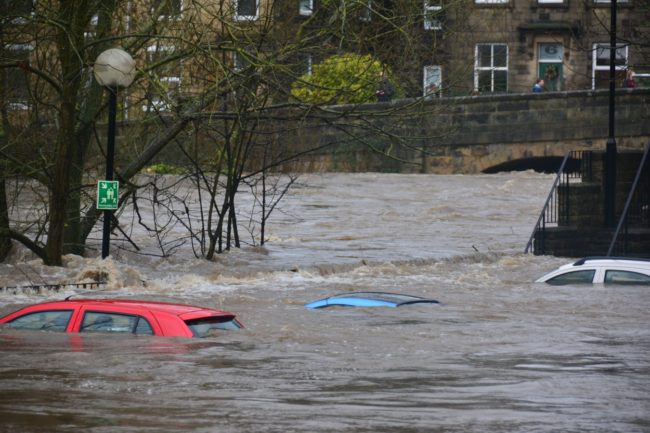 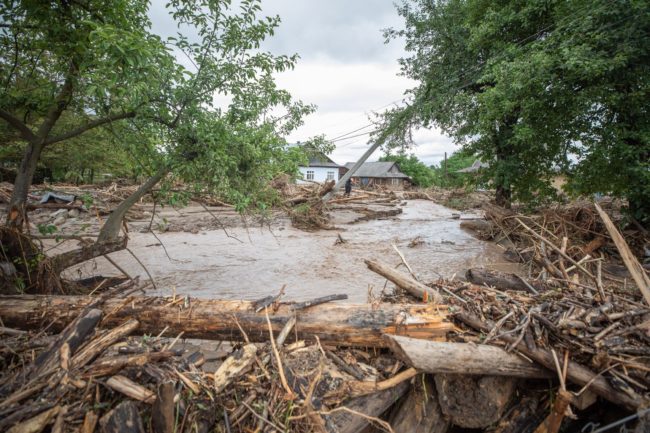 At the end of June, heavy rain fall in the western part of Ukraine led to extensive flooding [4], the most serious since 1948. Several people lost their lives; the infrastructure of entire districts was washed away. Thousands of houses have been flooded, roads washed away and many villages are still inaccessible. Some hospitals, where patients with Covid were being treated, have also been washed away.

The main cause of the increasingly frequent flooding in western Ukraine is the massive deforestation of the forests of the Carpathian Mountains. Logging on mountain slopes is especially dangerous as it causes soil erosion. The loss of the trees’ root systems means that they can no longer anchor the soil. The loss of these forests results in the cascading rain water washing away the soil, causing mudslides that demolish bridges, roads and houses and stripped of soil, the mountain slopes are no longer able to sustain trees. 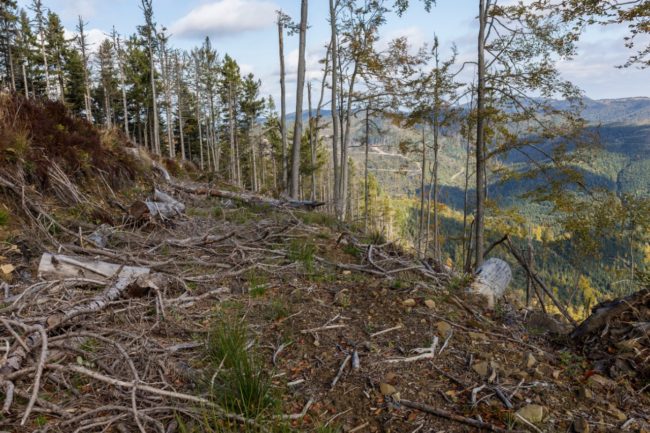 While this was happening, the British organization Earthsight published [5] the results of its investigation. The report, Flatpåcked Förests, shows that the illegally logged timber of Ukraine’s Carpathian forests is being delivered to European countries, where it is being bought in large quantities by corporations, including IKEA. Illegal logging and the export of Ukrainian timber to the EU did not stop, even during the quarantine period.

The report states: “Earthsight’s 18-­month investigation has found that Ikea is selling beech chairs, made from wood which was illegally felled in the forests of the Ukrainian Carpathians, home to endangered lynx and bear. Illegal wood has been used to make a number of well­-known products, including its iconic folding, slatted Terje chair and best­-selling Ingolf dining chair. Tens of thousands of chairs made from illegal wood are being sold at Ikea stores across the globe each year, including in the US, UK and Germany”.

The mass deforestation is also as a direct result of pressure from the EU. Since 2014, the European Union has been demanding [6] that Ukraine agrees to the export of unprocessed wood. Even though the Ukrainian authorities are aware that such permission will undermine their domestic position, they dare not argue with the EU. As a result, the logging is in full swing but being done so illegally.

During the month of June, ultra-right terror returned to the streets of Ukraine’s cities. Throughout the country, militants from the National Corps – the civilian wing of the neo-Nazi regiment Azov– have been assaulting representatives of opposition parties. The trigger for the terror campaign was a protest in Kiev on June 17. Supporters of the new opposition party of the popular blogger Anatoly Sharij came to the President’s Office to demand that ultra-right militants be held accountable for the killings and assaults. 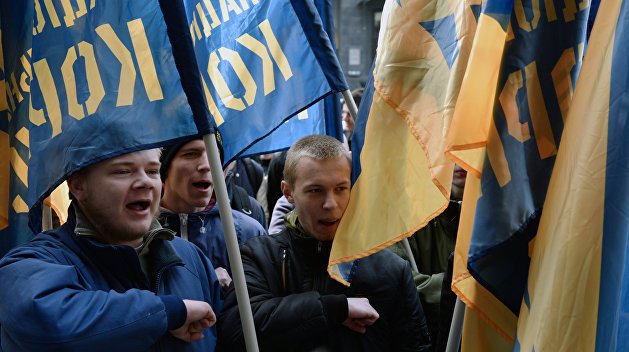 Following the rally, the protesters were attacked by Azov militants on the Kiev metro. The very next day, the leadership of Azov openly announced the beginning of a “safari”[7] against supporters of this party, promising to “remove this garbage from the street”. Sharij’s party supporters are being assaulted with bats and hammers [8] and even members of their families are being maimed and beaten. As usual, the police do not intervene, since the police leadership also frequently includes Azov militants. Meanwhile, Ukraine’s president is trying to ignore what is happening and is not commenting on the neo-Nazi terror.

With this lack of action and connivance from the authorities, a number of opposition parties, including the Sharij Party and the Opposition Platform, have announced the formation of self-defence forces.

I see two options for the development of events: either the authorities will put things in order in the streets, or we must realize that no one will help us, and organize the people’s self-defence squads to defend from these bandits by ourselves. We won’t let them intimidate and kill us one by one”, said Vadim Rabinovich, leader of the Opposition Platform, also emphasizing that a similar terror occurred in Germany before the Nazis came to power [9].

The words of the German pastor, Martin Niemoeler,

First they came for the communists …” are also being confirmed in Ukraine. With the ban of the Communist Party, Ukraine’s neo-Nazis have begun to attack other opposition parties. 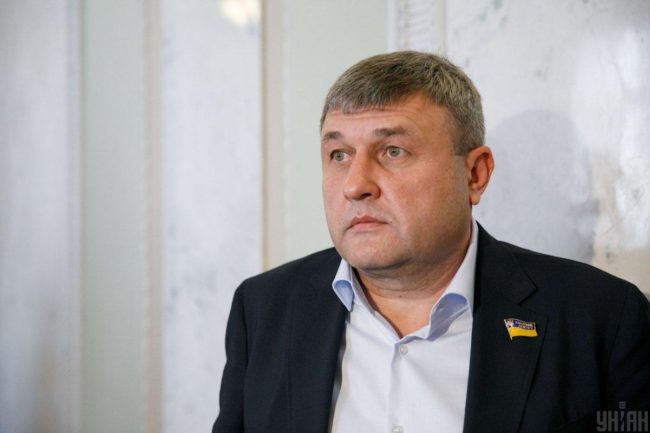 On June 22, militants of the Azov National Corps even attacked a deputy of the presidential party “Servant of the People”. He ‘dared’ to say that Ukraine needs to negotiate with the Donbass republics and implement the already signed Minsk peace agreements. “This is banal crime. And it’s no secret that the radical Right is fulfilling someone’s order. I want to warn the politicians who use the services of radical extremists: tomorrow they will easily turn their weapons against you”, wrote Deputy S. Litvinenko [10].

Another reason for the activation of far-right street terror is their clichéd demand for ransoms. The neo-Nazi structures of Ukraine, including those integrated into the National Guard, as Azov, exist due to robbery and extortion. They extort money from businessmen in exchange for allowing them to work. They obtain money under duress from political parties, threatening to unleash a terror campaign. Ruslan Bortnik, a Ukrainian political scientist and director of the Ukrainian Institute of Politics, says that the National Corps and Azov have become a kind of “franchise”.

You need to understand what the National Corps is made up of: to a large extent they are warlords, with very radical ideas. They are easily used in various political or economic conflicts. And these people are sometimes openly manipulated by their political leaders or backstage actors. The second problem is that in many regions the “National Corps” sometimes resembles a “franchise”, which falls into the hands of a political or criminal clan which uses this means for its own purpose. And the fact that this “franchise” has spread throughout Ukraine (at times poorly controlled by the leadership), often leads to those who associate themselves or declare themselves “National Corps” participating in various kinds of clashes and seizures. These are forces that require funds for their party activity. They need resources, and this means robbery and the seizure of property. This puts pressure on business, on political opponents, for the purpose of obtaining their resources. This is often one of the informal real components of the work of all radical organizations. Including the National Corps”, Bortnik concluded [11].

“A sort of octopus that has entangled the Ukrainian government, the political and economic elite, and the entire law enforcement system”

To some extent, the United States–the Democratic Party in particular–is responsible for such a development in Ukraine. At a press conference in Kiev on June 22, Deputy Andrei Derkach and the former Prosecutor Konstantin Kulik unveiled the next part of the discussions held between ex-president Petro Poroshenko and Joe Biden [12]. The records indicate that the Ukrainian leadership would not take any steps without consultation with and the approval of the United States.

The main conclusion is that Ukraine is not just under external influence or tutelage from the West, but is controlled manually and directly. Representatives of the American establishment are deeply integrated in the Ukrainian state apparatus – in the government, parliament, and key state-owned companies. At various levels there are American “curators”. All key management decisions pass through them” [13].

From the tapes it also follows that it was Biden who lobbied for Kiev to be granted its “visa-free” regime with the EU, in exchange for the nationalization of Ukraine’s Privatbank, which emphasizes the dependence of not only Ukraine, but also the European Union as a whole [14].

A further new portion of audio recordings once again confirms that when taking almost all of his important decisions, ex-president Poroshenko coordinated with Joe Biden and the resources of the FBI and the CIA were used to solve his problems with his political and business rivals.

At a press conference, Deputy A Derkach and Prosecutor K. Kulik presented a scheme of external governance of Ukraine by the US Democratic Party. Derkach called the “democratic corruption” scheme “a sort of octopus that has entangled the Ukrainian government, the political and economic elite, and the entire law enforcement system”[15].

Thus, it may be concluded that not only the massive deforestation but also the looting of national natural resources and the street terror of the neo-Nazis against the Ukrainian opposition is taking place either under the control or with the permission of the US Democratic Party.