June update: The political ‘dance’ of Ukraine’s new president; one step forward, one step back 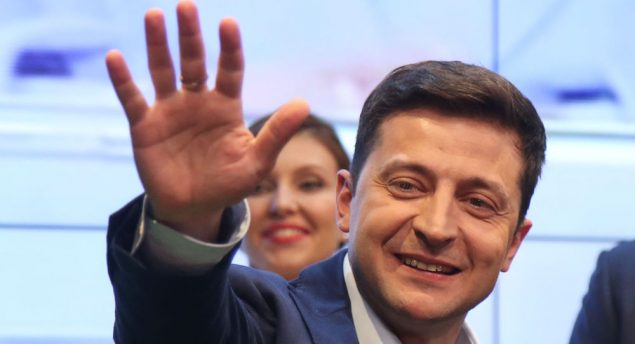 Written exclusively for the New Cold War website by our regular contributor Dmitry Kovalevich, he examines the current situation in Ukraine in the first month of Zelensky’s presidency.

Two months have passed since the election of the new president and a further month since his inauguration. Even though the majority voted for him in the Russian-speaking southeastern region, in the hope of stopping the conflict in Donbass, by June the war had escalated. The Ukrainian Armed Forces shelled Donetsk mosque at the beginning of June, right in the middle of celebrations for the Muslim holiday of Eid al-Fitr.

On June 19, they also shelled the Donetsk children’s hospital[i]. Meanwhile, the Ukrainian media continue to spread unbelievable nonsense; such as claiming that ‘terrorists shell their [own] cities in order to discredit the Ukrainian army’. Zelensky’s press-secretary Yulia Mendel, was summoned[ii] to the General Prosecutors’ office for questioning, her offence being that she said the Ukrainian army shells civilians in Donbass.

The first month of Zelensky’s presidency has revealed that he has no leverage to stop the war. In response to the president’s proposal to stop firing on Donbass’ cities, the Ukraine artillerists downloaded a video[iii], showing them brazenly firing a weapon while saying ‘Zelensky, f…k off!’. In other words, some armed far-right groups, such as the Ukrainian Volunteers’ Army (formed out of the Right Sector militants) do not consider themselves to be under the command of the Ukrainian president. So far they have ignored all orders to ceasefire. As this armed structure is funded largely by the Ukrainian-Canadian diaspora, any attempt to disarm it could instead exacerbate the situation.

Meanwhile, a survey made during June shows[iv]that some 70% of those asked would like to see Zelensky in direct negotiations with Russia, in order to stop the war in eastern Ukraine; however, western ambassadors don’t like this, claiming that he is an inexperienced politician. Their wish is for Zelensky to negotiate only through the auspices of western leaders., as they fear that the two presidents might actually agree on some issues.

Also in the month of June, Ukraine’s delegation at the Minsk negotiations put forward a condition to lift the economic blockade of Donbass – the return of the nationalized assets and property to Ukrainian owners[v]. Kiev didn’t mention anything about the obligation to pay out pensions and salary debts to Donbass residents, instead focusing only on demand to return nationalized property. This reveals what Ukrainian soldiers have been fighting for over the last five years.

Zelensky’s team, still impotent when it comes to introducing any real or significant changes, is instead focusing on minor issues. For example, the first document to receive the president’s signature was a decree on renaming the Administration of the President into the Office of the President. He then abolished students’ compulsory wearing of school uniforms. This reminds me of the Iraqi Parliament during the US coalition occupation – while the country was being robbed and bombed, tormented by the civil conflict and invasion, the Parliament used to focus on ‘important’ issues, such as the kinds of dress women should be allowed to wear.

Some cosmetic changes took places in Ukraine’s ministries – some ministers were replaced by their deputies who promised to continue the same policy. Ordinary Ukrainians still expect significant changes after parliamentary elections on July 21. The new party of President Zelensky ‘Servant of the people’, according to recent polls, may win from 43 to 50 percent and form parliamentary majority without the need for coalition with other parties. The high level of popularity of the newly formed party is conditioned by the high expectations of wholly different layers of Ukraine society – from conservatives to progressives, from some pro-European activists to some pro-Russian citizens. Nevertheless, the candidates included in the list for Zelensky’s party, are mainly people connected in some way with the oligarch Igor Kolomoisky, pro-NATO NGO activists and some popular bloggers. Their interests and views are often contradictory and this makes the party (or rather its future parliamentary faction) unstable.

Vladimir Zelensky and his team have declared that they are libertarians, but this is a term with which most ordinary Ukrainians are still largely unfamiliar. Some elements of the media are trying to explain that this will inevitably mean further privatization and neoliberal reforms, but for most Ukrainian voters, their desires are still largely focused on changing the power – in order to stop the war and improve their wellbeing. It is worth noting that parties of the far-right and organizations of militant neo-Nazis are supported by just 1 or 2 percent of Ukrainians but even so their agendas are still promoted by the state, largely because this is a requirement of the U.S.

The main economic problem that looms over Ukraine is the strong likelihood of energy collapse. As of January 1, 2020, Russia may stop the gas supply via the Ukraine pipeline (building alternative routes). This not only means that the Ukrainian public budget will lose $3 billion each year (which Russia currently pays the country for the transit of gas to Europe), but also a lack of gas for domestic use. The Russian company Gazprom has offered a 25% discount and the prolongation of the gas transit contract, but Ukraine’s officials are still puppets of the U.S., the main mission of which is to prevent Russian gas supplies (to Ukraine and EU) and to boost U.S. LNG sales. But the infrastructure for LNG supplies in Ukraine will take three years to build, if it ever is built. This situation could well result in entire cities freezing, due to the lack of winter heating. This may also lead to the collapse of the remaining industries that are unable to properly function without a gas supply, the most vulnerable of which is the production of fertilizers for agriculture.

After the Maidan coup in 2014, the Ukrainian economy was re-oriented to agricultural production but it is impossible for this sector to work without fertilizers, and natural gas is the main component for its production. In order to reverse this trend, Ukraine needs to normalize its relations with Russia, despite pressure from the U.S., which sacrifices Ukraine to weaken Russia. The new president’s team is cautiously trying to liberalize Ukraine’s policy and dispense with the most notorious nationalist hysteria. But the attempts are still being blocked by Ukraine’s western partners, domestic far-right nationalists and cronies of the former president who remained in office.

Judging by the first tentative steps that Zelensky has taken as president, I can only suppose that his rule will continue in the same vein – weak and uncertain. Any serious attempt to stop the conflict or normalize relations with Russia will inevitably and immediately lead to violent resistance from pro-U.S. activists and far-right armed groups aimed at blocking normalization.

As writes[vi]an exiled activist of the banned Ukrainian communist organization Borotba, “What’s happening now in Ukraine are cosmetic repairs that require ridding it of the most odious legacy of Poroshenko’s era, while essentially changing nothing. Liberalization in the country will be rather limited, so as not to lead to the revenge of the anti-nationalist forces in Ukraine”.