July update: US-German deal over Ukraine and beyond; permission for Nord Stream in exchange for support of a neo-Nazi concept in Eastern Europe 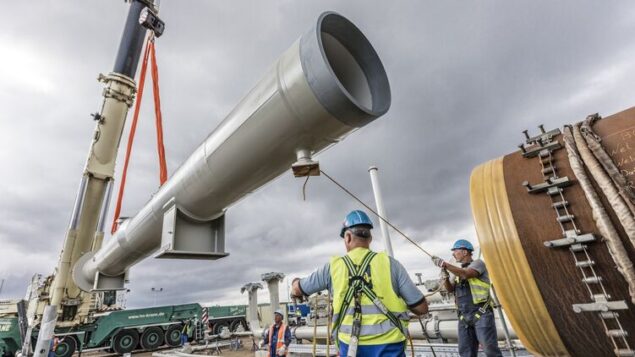 July has witnessed the absence of any real independence for Ukraine, first by the agreements between the United States and Germany regarding Ukraine and the Nord Stream 2 gas pipeline. Then there’s the concepts of the Eastern European neo-Nazis, the flirting of the Kiev authorities with China and the de facto refusal to comply with the signed peace agreements – all of of which turn out to be closely interconnected. Dmitriy Kovalevich offers NewColdWar’s readers his exclusive monthly analysis of what’s been happening in Ukraine.

In July, the Ukrainian authorities closely followed the international negotiations of the leaders of the United States, Germany, and Russia, fearing (not without reason) that the global leaders would decide their fate without their participation and consultations. Such concerns are regularly voiced by Ukraine media, even though both president Zelensky and the Minister of Foreign Affairs make a point of reassuring the population that they would never allow external players to resolve important issues for Ukraine behind its back.

First, this concerned the prospects for launching the Nord Stream 2 gas pipeline, which became the subject of negotiations between Angela Merkel and Joe Biden. Kiev has long resisted its construction, hiring lobbying companies inside the United States to stop it with the help of sanctions. For Ukraine, it is a question of $3 billion annually for the transit of Russian gas to the EU. However, over the years, funds have been transferred to the accounts of the Ukrainian state-owned company Naftogaz, which is controlled by the US Embassy through the Supervisory Board. The funds were distributed non-transparently (even Ukrainian deputies and officials could not find out where the money went).

Meanwhile, the Ukraine’s gas transportation system (inherited from the USSR) is declining and degrading. In theory, the funds for gas transit should have been partially allocated for its modernization, but this did not happen. Thus, in the event of its collapse sometime in the future, the inhabitants of Germany may not receive gas in the cold winter months, which is well understood by a politician who is as pragmatic as Angela Merkel.

The Politico [1] recently reported the Biden’s administration is urging Kiev to refrain from publicly criticizing a major deal between Washington and Berlin, as it could harm US-Ukraine relations. In addition, the edition writes that the White House has called on the Ukrainian authorities to refrain from discussing with the US Congress the potential plans of the United States and Germany on the Russian gas pipeline.

Germany has published the text of the agreement with the Americans on the Nord Stream 2. Ukraine is often mentioned in the document. As reported in the Ukrainian edition of Strana, “The agreement shows that the political subjectivity of Ukraine is not high for the high negotiating parties.”[2]

In the agreement, Ukraine is promised a very modest financial assistance for its green energy development. Germany also pledged to start negotiations with Russia on the extension of the gas transit contract with Ukraine until 2034. This again leads to the questioning of Ukraine’s political subjectivity: they will even negotiate with Gazprom instead of Ukraine. But it is unclear if negotiations will end positively for the country. However, just as importantly, Berlin intends to increase its support for the Three Seas Initiative targeting Russia.

“Its objective is,” The German Foreign Policy writes, “on the one hand, to add a north-south component to the existing east-west transportation infrastructure in the direction of Germany. And on the other, they seek to import and distribute US fracking gas, also along a north-south axis, to force Russian natural gas from the region’s market. For years, the Three Seas Initiative’s orientation on the USA has been an annoyance to Berlin.” [3]

This initiative, promoted by NATO in eastern Europe, is not only targeting Russia, but also targets Germany. Its goal is to form an Eastern European buffer union of states, which should become a kind of wall between Germany and Russia/China, complicating their economic relations. Historically (as it has developed since the Middle Ages), obstacles to trade between Europe and Asia became the reason for the development of bypass sea routes, the rise of British Navy and British imperialism, operating on the principle of “divide and rule”.

The same concept, called Intermarium [4], has been promoted since 2014 by Ukrainian and Eastern European neo-Nazis, including Azov. According to this concept, instead of the old “degenerative” Europe, which accepts migrants from Asian and African countries, a new “bastion of the white race” should be created in Eastern Europe, from where the “Reconquest” of the whole of Europe should begin.

The Ukrainian economist Alexander Skubchenko considers the bypassing of gas pipelines to be the result of Kiev’s anti-Russian policy after 2014. The consequence of this policy was not Russia’s desire to invade Ukraine, but, on the contrary, they are trying to bypass it.

We have nothing to blame Germany for: its own interests are always above those of others. Did they promise us something? Well, you have to live, not with empty promises but with your own interests. It is very stupid to reduce your transit potential to zero by playing the “eastern front of NATO”, the economist writes [5].

Dissatisfied with the relatively small compensation from the West for the Nord Stream and other financial assistance to Ukraine (provided in exchange for the fight against corruption but so far only for promises to fight it), Kiev began to flirt with China. This is not about some kind of serious cooperation, but only about the desire to bluff in order to bargain for more financial assistance from the West. In June, Ukraine first signed the UK and Canadian UN resolutions on Uighur rights, which Beijing described as anti-Chinese. A day later – Kiev withdrew its signature when China threatened to stop supplying vaccines.

Then on July 13, the first ever telephone conversation took place between the chairman of the People’s Republic of China Xi Jinping and the President of Ukraine Zelensky. A day later, the adviser to the head of the Office of the President of Ukraine Oleksiy Arestovich said that the West, being concerned about China, could agree with Russia on the division of spheres of influence in Ukraine. Arestovich concluded that there can be a turn of Ukraine to the East (Turkey, China, Vietnam, UAE, Qatar), so as to blackmail the West.

A number of Ukrainian ministers and David Arahamia, the leader of the presidential party in the parliament, took part in the event, timed with the celebrations in China of the 100th anniversary of the CPC. A week later, Arakhamia in an interview with the Chinese media said that his party should adopt the experience of the CPC (and this is in Ukraine, where communist ideology and symbols are prohibited). After another 5 days, he extolled the experience of the Chinese communists in one of the anniversary stories of the leading Chinese broadcaster CCTV.

“It is quite possible that this game is a bluff. In any case, it is difficult to imagine that the West would allow Ukraine’s turn to the East or at least a noticeable pro-Chinese correction of its policy. Much more likely Beijing will be deceived again, losing even more money than in the case of the Motor Sich plant’, writes a Ukrainian expert Peter Safonov[6], recalling the history of the acquisition of shares of the Motor Sich plant by Chinese investors that the Secretary of State Mike Pompeo called a “bad deal.” Kiev then instantly canceled the deal, but did not return $1 billion to Chinese investors, which caused them to go to arbitration against Kiev.

During an interview for the Ukrainian edition of Ukrlife, Presidential Office Advisor Arestovich also said that by turning to China they are simply trying to blackmail the West if it finally demands the implementation of the Minsk agreements and the Steinmeier formula, which Kiev had previously signed. He continued, “So they will call us and say: you are bad guys, please, implement the Steinmeier formula. We say: but we will not. So, what is next? And we are leaving for China.”[7]

And, after the Biden-Merkel talks, Germany really demanded that Kiev implement the Steinmeier formula into legislation for a peaceful settlement of the conflict in Donbass. But US embassy didn’t support the German claim.

Odessa journalist Yuri Tkachev emphasizes that the war in Donbass also lasts only with the consent of the United States and the West as a whole, since in other cases the US has easily forced the Ukraine authorities to concede.

‘All interested parties, including the United States, Germany, and France, know that Ukraine was not going to fulfill the Minsk agreements. And the point here is not even that someone said something. The Minsk agreements were directly denounced by the Verkhovna Rada by Resolution No. 3809 from July 15, 2019. This resolution is still valid, and no one even tries to raise the issue of its cancellation or amendment. If the West wanted the Minsk agreements to be fulfilled, they would have been fulfilled within a week.

We have seen how the West acts when it needs something from Ukraine, be it agricultural lands, control over its banks, state-owned gas company or control over the country’s courts, the creation of its own repressive bodies etc. Ukraine was told what it should do, and it was done without any debates. And public opinion was cynically ignored, as all occupation administrations do. And if the West has not done the same regarding the Minsk Agreements over all the previous years, it means that it supports Ukraine’s course of its non-implementation. Moreover, I would suggest that in 2014/2015, Ukraine was directly promised that the West would not insist on the implementation of what was signed. ‘Sign it, and we’ll deceive those silly Russians, and then we’ll do everything the way we want it,” writes a Ukrainian journalist. [8]

Simply put, in July, we clearly saw the absence of real independence for Ukraine exemplified by the agreements between the United States and Germany regarding Ukraine and Nord Stream 2. Moreover, the gas pipelines, the concepts of the Eastern European neo-Nazis, the flirting of the Kiev authorities with China and the de facto refusal to comply with the signed peace agreements – all turned out to be closely interconnected. And this proves once again that the responsibility for the continuation of the war in Donbass lies primarily with the United States and Western countries as a whole.