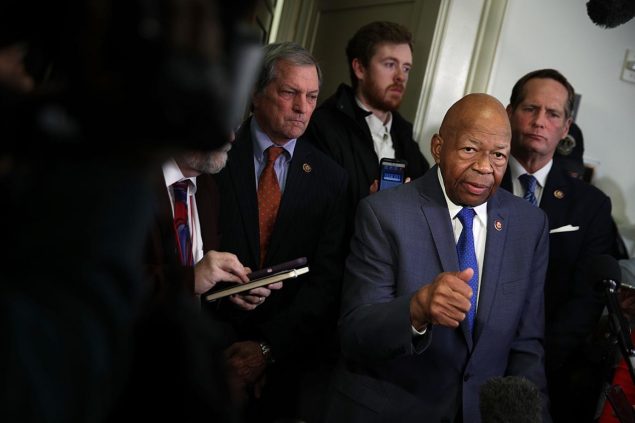 Judge, Amit Mehta, has ruled that Congress can investigate the president without beginning formal impeachment proceedings.

By Andrew Desiderio and Kyle Cheney

A federal judge on Monday upheld a congressional subpoena seeking President Donald Trump’s financial records from an accounting firm, arguing that Congress is well within its rights to investigate potential illegal behavior by a president — even without launching a formal impeachment inquiry.

U.S. District Court Judge Amit Mehta’s ruling delivers a striking blow to the president’s efforts to resist Democratic investigations, and is certain to give Democrats further legal basis to investigate Trump, his finances, and his presidential campaign.

In addition to upholding the House Oversight and Reform Committee’s subpoena to accounting firm Mazars USA for eight years of Trump’s financial records, Mehta took the extra step of denying the president’s request for a stay pending appeal.

Jay Sekulow, one of the president’s personal attorneys, said: “We will be filing a timely notice of appeal to the D.C. Circuit Court of Appeals.”

Speaking with reporters at the White House on Monday, Trump called Mehta’s ruling “ridiculous” and “totally wrong.” He also noted that Mehta was appointed by President Barack Obama.

Mehta’s decision is a sweeping repudiation of Trump’s claim to be largely immune from congressional scrutiny, particularly in matters of potential legal violations. Mehta’s opinion emphasizes that lawmakers have the authority to investigate Trump’s conduct from both before and after he took office.

The ruling represents the first time the federal judiciary has weighed in on the ongoing oversight battle between Trump and House Democrats. Mehta’s ruling is likely to provide a blueprint for other judges who are set to make their own rulings on Trump’s vow to defy all congressional subpoenas.

In a 41-page opinion issued Monday, Mehta systematically dismantled the Trump legal team’s arguments against the validity of the subpoena — and he pushed back on claims from congressional Republicans that the House Judiciary Committee must formally launch an impeachment inquiry before issuing such subpoenas.

“It is simply not fathomable that a Constitution that grants Congress the power to remove a president for reasons including criminal behavior would deny Congress the power to investigate him for unlawful conduct — past or present — even without formally opening an impeachment inquiry,” Mehta wrote.

Mehta noted that Congress had twice investigated alleged illegal activity by presidents Richard Nixon and Bill Clinton. “Congress plainly views itself as having sweeping authority to investigate illegal conduct of a president, before and after taking office,” Mehta wrote. “This court is not prepared to roll back the tide of history.”

The president filed suit last month to block the subpoena, arguing that it amounted to an improper and overtly political abuse of congressional authority.

Mehta eviscerated that argument, too, emphasizing that a judge’s analysis of a congressional investigation “must be highly deferential to the legislative branch.”

“Thus, it is not the court’s role to decipher whether Congress’s true purpose in pursuing an investigation is to aid legislation or something more sinister such as exacting political retribution,” Mehta wrote, adding that there are “fundamental” problems with Trump’s legal arguments.

Oversight Committee Chairman Elijah Cummings (D-Md.) issued the subpoena to Mazars last month as part of the panel’s investigation into whether Trump committed financial crimes before he became president.

In particular, the committee has sought to corroborate specific claims made by Trump’s former personal attorney and fixer Michael Cohen. Earlier this year, Cohen turned over documents to the panel which purport to show that Trump artificially inflated and deflated the values of his assets to suit his personal financial benefit.

For example, Cohen told lawmakers that Trump submitted false financial statements to Deutsche Bank in 2014 as he was seeking a loan to buy the Buffalo Bills NFL team.

“The court recognized the basic, but crucial fact that Congress has authority to conduct investigations as part of our core function under the Constitution,” Cummings said in a statement.

Mehta emphasized that even though the committee never adopted a formal resolution outlining the purpose of its investigation, many other factors would deem the probe legitimate. Mehta pointed to Cummings’ reliance on federal ethics law in letters outlining the purpose of his investigation, and noted that legislation could conceivably be connected to the results of that probe. The judge also noted that Congress has unique constitutional power to oversee potential “emoluments,” or improper foreign payments, steered toward the president.

“Surely, incident to Congress’s authority to consent to the president’s receipt of emoluments is the power to investigate the president’s compliance with the Clause,” Mehta argued.

Congress is also allowed to investigate presidential conflicts of interest and a president’s conduct “before and during his term,” Mehta ruled, pushing back on an argument from Republicans that Congress shouldn’t be investigating Trump’s conduct that pre-dates his political career.

Consovoy contended that Congress has no legitimate authority to investigate whether the president violated the law, because such probes are handled by “law enforcement” entities and aren’t tied to a specific legislative remedy.

But Mehta pushed back strongly on Consovoy during the hearing, stating those types of investigations are “strictly” within Congress’ purview. He also said Congress has the authority to investigate conflicts of interest — for example, whether a president has a “financial interest in a particular piece of legislation that was being considered.”

In addition to the Mazars suit, Trump has asked a federal court to invalidate the House Intelligence and Financial Services committees’ subpoenas to Deutsche Bank and Capital One. Those subpoenas also seek Trump’s personal and business financial records, as part of a joint investigation centering on whether Trump is compromised, financially or otherwise, by foreign actors.

Trump and his GOP allies have argued that the Democrats’ probes are illegitimate and amount to an abuse of power.

Darren Samuelsohn and Quint Forgey contributed to this report.