Judge insists steep fines against Chelsea Manning are not punishment 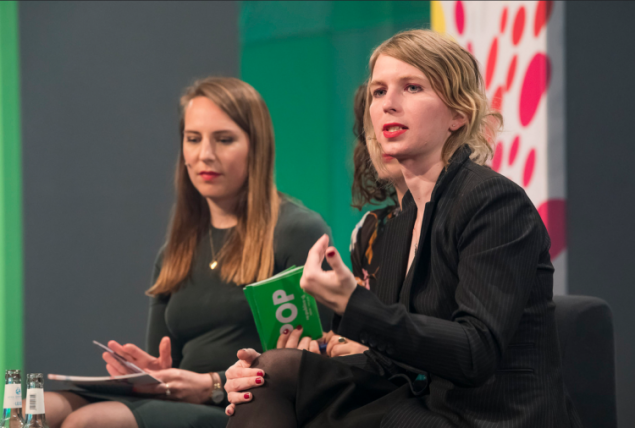 A US federal Judge has refused to reconsider US $1,000 per day fines imposed on Chelsea Manning for her refusal to testify before the grand jury investigating WikiLeaks. He also undermined due process and refused to hold a hearing…Her legal team said Manning will “remain confined for another year and will face ongoing financial hardship,” unless Judge Trenga or a higher court is convinced that the fines imposed will “never coerce her compliance” and amount to punishment.

A federal judge denied Chelsea Manning’s motion to reconsider fines imposed against her for refusing to testify before the grand jury investigating WikiLeaks. He also undermined due process and refused to hold a hearing.

“Manning has the ability to comply with the court’s financial sanctions or will have the ability after her release from confinement,” Judge Anthony Trenga ruled. “Therefore, the imposed fines of $500 per day after 30 days and $1,000 per day after 60 days is not so excessive as to relieve her of those sanctions or to constitute punishment rather than a coercive measure.”

Trenga additionally insisted that he had the authority to confine her and impose fines as well.

“I am disappointed but not at all surprised. The government and the judge must know by now that this doesn’t change my position one bit,” Manning declared in response to the decision.

Her legal team said Manning will “remain confined for another year and will face ongoing financial hardship,” unless Judge Trenga or a higher court is convinced that the fines imposed will “never coerce her compliance” and amount to punishment.

“She has no personal savings, an uncertain speaking career that has been abruptly halted by her incarceration, and is moving her few belongings into storage, as she can no longer afford to pay her rent,” Manning’s legal team made clear in their motion.

Manning’s attorneys further indicated that Manning attempted to share her financial records with the federal court in an effort to show that she has debt and “compromised earning capacity,” which has “left her balance sheets near zero.” But the court apparently never completed a financial assessment of her ability to pay fines.

Trenga acknowledged the “substantial number of financial records documenting her assets, liabilities, and current and future earnings” that were shared with the court. Yet, he maintained they did not present “any new evidence, arguments, or legal authorities” that required the court to conclude it had committed an error by imposing detention, as well as fines.

The judge has “almost unreviewable discretion” when it comes to interpreting her financial records, according to Manning’s legal team.

“Despite the fact that Chelsea is currently deeply in debt, and cannot work while incarcerated, Judge Trenga was able to conclude that fines totalling $441,000 fall within the parameters of a ‘coercive’ sanction, and do not intrude into the forbidden realm of the punitive,” her attorneys stated.

He also stated his belief that continued confinement may yet exert a coercive impact upon Ms. Manning, and asserted that he retains the authority to keep her confined while simultaneously imposing daily fines, a point of law vigorously disputed by Ms. Manning’s lawyers.

Trenga maintained that fining and jailing Manning fell within the court’s “traditional contempt powers.” Manning’s attorneys disputed this “point of law” and argued these types of fines are often reserved for corporations because they can absorb fines without suffering homelessness.

“Rarely, individuals are fined, but counsel can find no case in which fines were assessed as to an individual other than where the individual was a sophisticated financial actor and the underlying contempt involved disobedience of a court order directing the management of a large amount of money,” they asserted in their motion.

Manning can appeal the decision, however, the intransigence of the judge does not bode well for someone who has already endured substantial trauma as a result of her return to confinement.

Previously, Trenga urged Manning to reflect on her principled opposition to testifying before the grand jury investigating WikiLeaks. He maintained there was “no dishonor” in cooperating with the grand jury, since it is codified in the United States Constitution.

Manning took Trenga’s admonishment seriously and responded with a letter containing research she compiled with the help of her attorneys. It presented her position on the grand jury in a very clear and compelling manner.

“The tradition of using political grand juries to jail political dissidents and activists is long,” Manning asserted. “The concept of a grand jury in which prosecutors subpoena activists and jail them for refusing to comply with the subpoena stands in stark contrast to the institution contemplated in the Constitution.”

She further suggested the grand jury’s current existence runs contrary to key civil liberties protections and contended it has been many decades since the grand jury bore any resemblance to what the drafters of the Constitution supported.

To the notion that she holds the key to her cell, and may walk free anytime, Manning responded, “[That key] is held in the beating heart of all I believe. To retrieve that key and do what you are asking of me, your honor, I would have to cut the key out, which would mean killing everything I hold dear, and the beliefs that defined my path.”

Kevin Gosztola is managing editor of Shadowproof. He co-hosts a weekly podcast called “Unauthorized Disclosure.” He published a daily column for Firedoglake called “The Dissenter” from 2011-2015. He covered Chelsea Manning’s trial extensively and co-wrote a book on early proceedings in Manning’s case called The U.S. v. Private Manning. He is based in Chicago, Illinois.