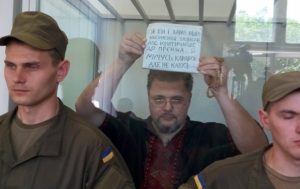 Ruslan Kotsaba at conviction in court in Ivano-Frankvist, western Ukraine on May 12, 2016

A court in Ivano-Frankivsk, western Ukraine today sentenced journalist Ruslan Kotsaba to three and a half years in prison on May 11. His sentencing occurred the following day.

He was convicted under article 114-1 of the Criminal Code of Ukraine, namely, hindering the activities of Ukrainian Armed Forces and other military forces. Prior to his arrest in February 2015, he called on Ukrainian men of military age to defy compulsory military draft and refuse to serve in the civil war zone of eastern Ukraine. He posted a video to the internet saying, “I would prefer to go to prison than to take part in this fratricidal war.”

The video was reportedly viewed more than 300,000 times. In it, he also said, “I refuse to be drafted and call on everyone who is called up to refuse.”

Ukraine’s military efforts against the rebellious population in the east of the country have been seriously hobbled all along by mass evasion of the military draft and high levels of desertion.

Kotsaba held a sign in the court to be transmitted to the world by photo (pictured). It reads, “‘I wouldn’t hesitate to again record a [antiwar] message; even more critical, and addressed to the Ukrainian President.” Then it cites the Ukrainian national hero and poet, Taras Shevchenko: “I am tormented, I suffer, but I do not repent.” 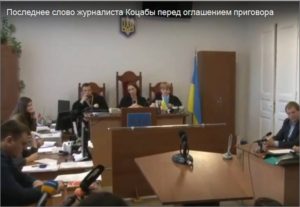 The courtroom in western Ukraine on May 12, 2016 where journalist Ruslan Kotsaba was sentenced to three and a half years (screenshot)

Kotsaba argued that the civil war in eastern Ukraine, what the government in Kyiv calls an ‘anti-terrorist operation’, was an undeclared and illegal war. State prosecutors demanded that he be sentenced to 13 years of prison with property confiscated for the crime of “high treason”.

Kotsaba has been in jail since his arrest. In his final statement to the court [broadcast in the Korrespondent report], he urged journalist colleagues to be objective in covering the conflict in eastern Ukraine and to understand its causes. 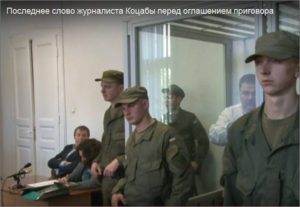 Kotsaba speaks to court in western Ukraine that convicted him on May 12, 2016 (screenshot)

The reading of the verdict lasted more than two hours. In sentencing the accused, the judges cited what they called two mitigating circumstances – it is Kotsaba’s first criminal conviction, and he is the father of two young children. The verdict can be appealed within 30 days.

Ukrainian courts are obliged to take two days off a sentence for every day that a prisoner spends in jail awaiting trial, so according to the Facebook page of his attorney, Tatyana Montyan, Kotsaba’s release date would be May 2017 if an expected appeal were to fail.

Several efforts to win release on bail were refused in previous court appearances. International human rights organizations as well as the Ukrainian ombudsman have urged throughout the case that charges against Kotsaba be dropped.