Johnson’s is a slow-burn coup we’ve seen before 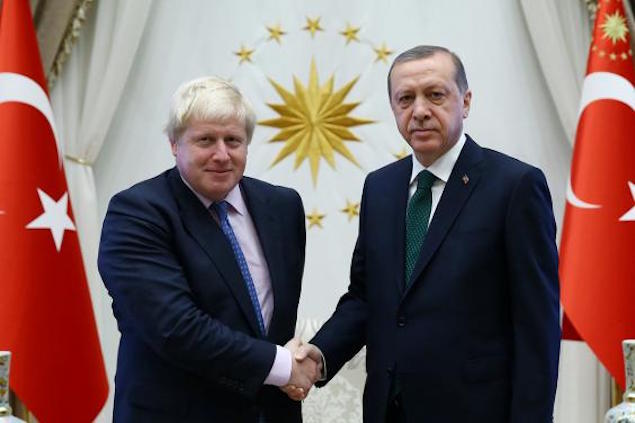 What Boris Johnson is orchestrating in Downing St, Westminster and across the country is a deeply “un-British” coup and more reminicent of Turkey’s Erdoğan, argues Patrick Cockburn.

Johnson’s is a slow-burn coup I’ve witnessed before

Britain is experiencing a slow-moving coup d’etat in which a right-wing government progressively closes down or marginalises effective opposition to its rule. It concentrates power in its own hands by stifling parliament, denouncing its opponents as traitors to the nation, displacing critics in its own ranks, and purging non-partisan civil servants.

Some describe this as “a very British coup”, which gives the operation a warmer and fuzzier feeling than it deserves. It is, in fact, distinctly “un-British” in the sense that the coup makers ignore or manipulate the traditional unwritten rules of British politics over the past 400 years whereby no single faction or institution monopolises authority.

What we are seeing has nothing to do with the British past but a very modern coup in which a demagogic nationalist populist authoritarian leader vaults into power through quasi-democratic means and makes sure that he cannot be removed.

This new method of seizing power has largely replaced the old-fashioned military coup d’etat in which soldiers and tanks captured headquarters and hubs in the capital and took over the TV and radio stations. Likely opponents were rounded up or fled the country. The military leaders sought popular passivity rather than vocal support.

I first witnessed the new type of coup in action three years ago in Turkey when it took place in reaction to an old-fashioned military coup. Part of the Turkish army tried to stage a military putsch on 15 July 2016 and provided the then prime minister Recep Tayyip Erdogan with what appeared to him to be a heaven-sent opportunity to install an elective dictatorship in which subsequent elections and the real distribution of power could be pre-determined by control of the media, judiciary, civil service, security services and, if people still stubbornly voted against the government, by outright electoral fraud.

I spoke to plenty of people in Istanbul in the days after the abortive military coup who saw clearly that its failure meant that they might have escaped rule by the army, but only at the cost of being gripped ever more tightly by civilian authoritarian rule.

“Erdogan’s lust for power is too great for him to show restraint in stifling opposition in general,” predicted one intellectual who, like almost everybody I was interviewing at this time, would only speak anonymously. This was certainly wise: TV stations, radios, newspapers, critics of all sorts were being closed down by the minute. When one small-circulation satirical magazine dared to publish a cartoon mildly critical of the government, the police went from shop to shop confiscating copies.

Some Turks comforted themselves by quoting the saying that in government “the worst politician is better than the best general”. Three years later, those not forced into silence, in exile or in prison may not be so certain that the difference between a civilian and a military dictatorship is quite so great.

Less than a year after the failed military coup, Erdogan held a blatantly rigged referendum which marginalised parliament and gave him dictatorial powers. Despite the harassment and silencing of critics, it passed by only 51.4 per cent in favour of these constitutional changes as opposed to 48.6 per cent against. Even this narrow majority was only achieved late on election night when the head of the electoral board overseeing the election decided that votes not stamped as legally valid, numbering as many as 1.5 million, would be counted as valid, quite contrary to practice in previous Turkish elections.

By the day of the referendum in 2017, some 145,000 people had been detained, 134,000 sacked, and 150 media outlets closed. No act of persecution was too petty or cruel: one opposition MP, who denounced the “yes” vote, found that his 88-year-old mother had been discharged by way of retaliation from a hospital where she had been under treatment for two-and-a-half years.

Turkish elections are not a complete farce as in Egypt and Syria, as was shown by the election of an opposition candidate as mayor of Istanbul earlier this year. But the political process as a whole is now so skewed towards Erdogan that it will be extraordinarily difficult to dislodge him. This is a feature of the 21st-century type coup: once in office, leaders are proving more difficult to evict than a junta of military officers a century earlier.

Could the same thing happen here in Britain? This is one of the strengths of the Johnson coup: many people cannot believe that it has happened. British exceptionalism means that foreign experience is not relevant. Few knew or cared that Turkey had a strong tradition of parliamentary democracy as well as a grim record of military takeovers. But it is these slow-burn civilian coups which are such a feature of the modern world that we should be looking at – and trying to learn from – and nor what happened in Britain in the 1630s when Charles I sought to impose arbitrary government.

Opponents of the suspension of the parliament have a touching faith that the present government will stick by the historic rules of the political game when everything it has done so far shows a determination to manipulate and misuse these rules to gain and keep political power.

Many in Britain are now springing to the defence of parliament and elected representation, but they should have sprung a bit earlier. Those in the Labour Party who were neutral about Brexit – or even saw it as a welcome disruption of the status quo and an opportunity for radical reform – only now seem to be noticing that Brexit was always a vehicle whereby the hard right could take over the government.

Progressive Turks have been down this road and knew all too well what lay at the end of it. Revolutionaries on the left suddenly discover that the right also stages revolutions and that there is virtue in a fairly elected parliament. “So here I am, gone from post-structuralist anarchist to ballot-box monitor,” tweeted one Turkish convert to this view as he vainly tried to thwart fraudulent elections.

The quote comes from How to Lose a Country: The 7 Steps from Democracy to Dictatorship, the compelling and instructive book by the Turkish writer Ece Temelkuran which forecast a year ago where the Brexit crisis was heading. Her work should be prescribed reading for anybody seeking to understand and resist the global trend she describes.

A weakness of such resistance is that its potential leaders, including supposed radicals like Jeremy Corbyn, really do look at Britain’s past as a guide. It is those who have been mocked for trying to recreate a fantasy England, such as Johnson and his chief lieutenants, who are much more in tune with the modern world and instinctively follow in the footsteps of Trump, Erdogan and their like from Washington to Sao Paolo and Budapest to Manila.

The annus mirabilis of the new populist nationalist authoritarians was 2016: the Brexit referendum took place in June, the Turkish military coup and Erdogan’s counter-coup in July, and Donald Trump’s election as president in November. Johnson, Erdogan and Trump are alike in specialising in aggressive patriotism, defence of an endangered national independence, and nostalgia for past glories.

Successful resistance to this toxic trend means learning from the fresh experience of other nations similarly blighted and not from British history.