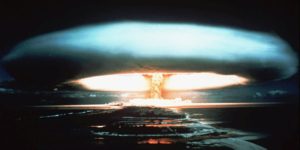 At the dawn of the nuclear age, its principal architect, Robert Oppenheimer, spoke of a stable standoff between nuclear powers. They would be held back from attacking one another by mutual fear, instead circling endlessly “like a pair of scorpions trapped in a bottle.”

Subsequently, political scientist Albert Wohlstetter pointed out that this stability would be lost if a situation arose in which advantage accrued to the first to attack. Then deterrence would at best be “a delicate balance of terror.”

Unknown to most, the balance is today at its most delicate. President Trump has inherited from previous administrations a balance of power tilted so far in favour of the U.S. that it might be advised at some awful moment of crisis to resort to a “first strike”.

Maintaining peace between the superpowers under these conditions will demand the highest level of skill and restraint from the two leaders. The auguries for this are not promising, since the delicacy of the balance has been hidden from public view.

What brought about this new imbalance? We owe it to a substantial increase in lethality of U.S. nuclear-armed submarine-based missiles. This makes it possible that a U.S. strike might destroy most of Russia’s missiles, still largely land-based. This new situation is described by three weapons experts in the March 1 issue of the Bulletin of the Atomic Scientists.

The Bulletin’s authors characterize the new U.S. first-strike capability as “revolutionary.” The increase in U.S. ballistic missile lethality resulted from attachment to the warheads of an altitude-measuring device (called a superfuse) that ensures it will explode above a targeted missile, with 90 per cent probability of destroying it.

There are 506 submarine-based nuclear warheads, each equipped with super-fuses, routinely deployed at sea in U.S. submarines. (Each warhead yields 100 kilotonnes — eight times the Hiroshima bomb.) As a consequence, the full complement of 136 Russian silo-based ICBM’s might be destroyed by attacking each with two warheads. This would leave the U.S. with a surplus of 234 super-fused warheads in their submarines, together with an additional 400 submarine-based “heavy” warheads (455 kilotonnes each) free to attack further targets, such as underground command centres, and forests sheltering mobile missiles. This catalogue of overkill does not include U.S. firepower on hundreds of land-based ICBM’s nor nuclear weapons on bombers.

The question today is not whether this guarantees U.S. “success” in the appalling eventuality of a nuclear first strike, but the effect it has on Russia’s faith in its deterrent. Absent assured second-strike capability, Albert Wohlstetter likened the standoff to a gun dual between armed cowboys — nothing could be less stable.

Due to limitations in the Russian early-warning system, which cannot see over the horizon, their military would have less warning time of a strike than the U.S. — a pathetic 10 to 15 minutes instead of 30.

The weakening Russian position in the nuclear weapons equation is known to Russia. In September 2015, President Putin “accidentally” revealed on television Russian plans for a 40-ton nuclear-powered super-torpedo with a range of thousands of kilometres that could carry a 100 megaton nuclear warhead. Such monstrous weapons could render the east coast of the U.S. uninhabitable. Testing began in December. The Russian intention in developing this new weapon is surely to start redressing the nuclear imbalance.

In 1962, in a previous time of imbalance, an inexperienced president, John F. Kennedy, brought the world to the edge of the nuclear abyss. The imbalance that triggered the Cuban Missile Crisis was less than that of today. The two sides remained equally vulnerable. “What did it matter,” Kennedy asked at the time, “whether you got blown up by a missile based in Cuba, or an ICBM from the Soviet Union?” It was the perception of imbalance that mattered, and mattered hugely.

Driving the crisis was the erosion of confidence between the two sides. Even the scorpions in their bottle are reliant on mutual understanding. Putin asserts this when he refers, as he often does, to his “partners in the West.” Trump does the same when he expresses the wish to forge a new deal with Russia. The need for that has never been greater.

Ultimately, the superpowers must reject threats of Armageddon for something more worthy of their civilizations, legislating Gorbachev’s assertion last fall “that nuclear weapons must be prohibited.”

This proposition, fervently endorsed by President Obama, will soon be debated in the UN General Assembly. But while we lay the foundations for a more humane world, we must see to it that the present order does not crumble.

John Polanyi is a Nobel laureate at the University of Toronto who has written widely on the dangers of nuclear war. He won the 1986 Nobel Prize in Chemistry for his research in chemical kinetics.

The New Cold War.org website maintains a category dossier titled Nuclear war danger. Here is a selection from that category:

The United Nations General Assembly today approved a historic resolution to launch negotiations in 2017 on a treaty prohibiting nuclear weapons. The vote follows a decision on 27 October by the General Assembly’s First Committee – which deals with disarmament and international security matters – to begin work on the new treaty despite fervent opposition from some nuclear-armed nations.

The resolution was adopted by a large majority, with 113 UN member states voting in favour, 35 voting against and 13 abstaining…