Jimmy Carter: US ‘Most Warlike Nation in History of the World’ 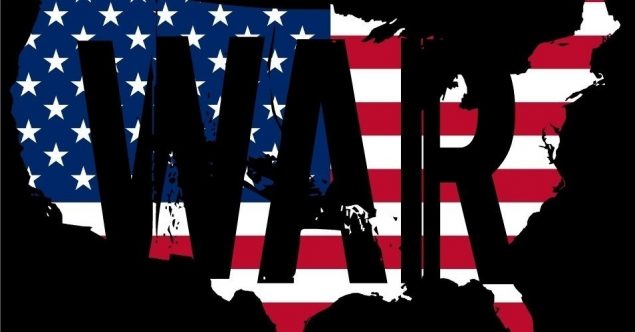 Most countries surveyed in a 2013 WIN/Gallup poll identified the United States as the greatest threat to world peace. (Photo: CD/CC BY 2.0)

Speaking about the US  during one of his regular Sunday school lesson at Maranatha Baptist Church, former president Jimmy Carter says peaceful China is ‘ahead of us [the US] in almost every way’ mainly because of China’s non-violent foreign policy. US aggression – and the country’s permanent state of war policy, is, on the other hand compelling other countries to do likewise.

The only US president to complete his term without war, military attack or occupation has called the United States “the most warlike nation in the history of the world.”

During his regular Sunday school lesson at Maranatha Baptist Church in his hometown of Plains, Georgia, Jimmy Carter revealed that he had recently spoken with President Donald Trump about China. Carter, 94, said Trump was worried about China’s growing economy and expressed concern that “China is getting ahead of us.”

Carter, who normalized diplomatic relations between Washington and Beijing in 1979, said he told Trump that much of China’s success was due to its peaceful foreign policy.

Carter then referred to the US as “the most warlike nation in the history of the world,” a result, he said, of the US forcing other countries to “adopt our American principles.”

“Since 1979, do you know how many times China has been at war with anybody?” Carter asked. “None, and we have stayed at war.” While it is true that China’s last major war—an invasion of Vietnam—occurred in 1979, its People’s Liberation Army pounded border regions of Vietnam with artillery and its navy battled its Vietnamese counterpart in the 1980s. Since then, however, China has been at peace with its neighbors and the world.

Carter then said the US has been at peace for only 16 of its 242 years as a nation. Counting wars, military attacks and military occupations, there have actually only been five years of peace in US history—1976, the last year of the Gerald Ford administration and 1977-80, the entirety of Carter’s presidency. Carter then referred to the US as “the most warlike nation in the history of the world,” a result, he said, of the US forcing other countries to “adopt our American principles.”

China’s peace dividend has allowed and enhanced its economic growth, Carter said. “How many miles of high-speed railroad do we have in this country?” he asked. China has around 18,000 miles (29,000 km) of high speed rail lines while the US has “wasted, I think, $3 trillion” on military spending. According to a November 2018 study by Brown University’s Watson Institute of International and Public Affairs, the US has spent $5.9 trillion waging war in Iraq, Syria, Afghanistan, Pakistan and other nations since 2001.

“It’s more than you can imagine,” Carter said of US war spending. “China has not wasted a single penny on war, and that’s why they’re ahead of us. In almost every way.”

“And I think the difference is if you take $3 trillion and put it in American infrastructure you’d probably have $2 trillion leftover,” Carter told his congregation. “We’d have high-speed railroad. We’d have bridges that aren’t collapsing, we’d have roads that are maintained properly. Our education system would be as good as that of say South Korea or Hong Kong.”

The US has also invaded or bombed dozens of countries and supported nearly every single right wing dictatorship in the world since the end of World War II.

While there is a prevalent belief in the United States that the country almost always wages war for noble purposes and in defense of freedom, global public opinion and facts paint a very different picture. Most countries surveyed in a 2013 WIN/Gallup poll identified the United States as the greatest threat to world peace, and a 2017 Pew Research poll found that a record number of people in 30 surveyed nations viewed US power and influence as a “major threat.”

The US has also invaded or bombed dozens of countries and supported nearly every single right wing dictatorship in the world since the end of World War II. It has overthrown or attempted to overthrow dozens of foreign governments since 1949 and has actively sought to crush nearly every single people’s liberation movement over that same period. It has also meddled in scores of elections, in countries that are allies and adversaries alike.