TOKYO (AP) — A woman who has downplayed Japan’s wartime actions and is known for far-right views was named defense minister in a Cabinet reshuffle Wednesday, a move that could unsettle Tokyo’s relations with Asian neighbors with bitter memories of its World War II-era atrocities. 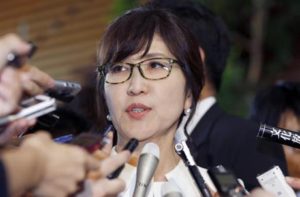 Tomomi Inada, a former reform minister who most recently was policy chief in the ruling Liberal Democratic Party, replaced Gen Nakatani as defense minister. She is the second female to fill the post.

Prime Minister Shinzo Abe changed more than half of the 19-member Cabinet in a bid to support his economic and security policies, as well as push for revising Japan’s postwar pacifist constitution.

While keeping the economy as the top priority, Abe said he would do his “utmost to achieve a (constitutional) revision during my term,” which ends in September 2018.

A lawyer-turned-lawmaker with little experience in defense, Inada is one of Abe’s favorites. She regularly visits Yasukuni Shrine, which honors war dead including convicted war criminals, a gesture seen as an endorsement of Japan’s militaristic past.

She also has defended Japan’s wartime atrocities, including forcing many Asian women into sexual servitude in military-run brothels, and has led a party committee to re-evaluate the judgment of war tribunals led by the victorious Allies.

Her link to a notorious anti-Korea group was acknowledged by a court this year in a defamation case she lost. Inada also was seen posing with the leader of a neo-Nazi group in a 2011 photo that surfaced in the media in 2014.

Inada, 57, is a supporter of Abe’s long-cherished hope to revise Japan’s Constitution. She has said parts of the war-renouncing Article 9 should be scrapped, arguing that they could be interpreted as banning Japan’s military.

Inada said she would try to protect peace and safety under the Japan-U.S. alliance, a cornerstone of Japan’s security and diplomacy. At a news conference after her appointment, she refused to say if she planned to visit Yasukuni to mark the Aug. 15 anniversary of the end of World War II.

Calling the test launch of a North Korean missile that fell into the sea off Japan’s northwestern coast on Wednesday a serious threat, Inada said the security environment surrounding Japan is worsening “by the day.” Yet, when asked about her suggestion in a 2011 magazine interview that Japan should consider possessing atomic weapons, she said the country at the moment is supposed to keep its military capability at a bare minimum and it’s not the time to study the nuclear option. 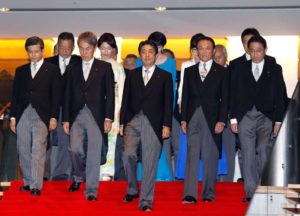 Finance Minister Taro Aso, Foreign Minister Fumio Kishida and Chief Cabinet Secretary Yoshihide Suga were among key Cabinet members who retained their portfolios, while 10 ministers were replaced in the reshuffle. Many are not necessarily experts in their assigned portfolio, prompting opposition lawmakers to criticize Abe for dominating the Cabinet with like-minded supporters of his political views.

Abe, whose key policies include women’s advancement, will have two other female Cabinet members, including one who will serve as Olympic minister after being shifted from environment minister. Tokyo is to host the 2020 Summer Games.

While campaigning for last month’s upper house elections, Abe promised to focus on economic revitalization in the short term, and to later seek to revise the constitution.

Since he took office in late 2012, Abe has sought to boost growth by pumping massive amounts of money into the world’s third-biggest economy. But lavish monetary easing and public works spending so far have failed to reignite growth as much as hoped.

The reshuffle was the third since Abe took office, and the first since October.

Tomomi Inada, a 57-year old ruling Liberal Democratic Party (LDP) lawmaker and close ally of Prime Minister Shinzo Abe, took up her post on Thursday, a day after being appointed… 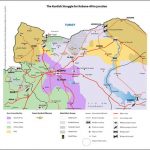