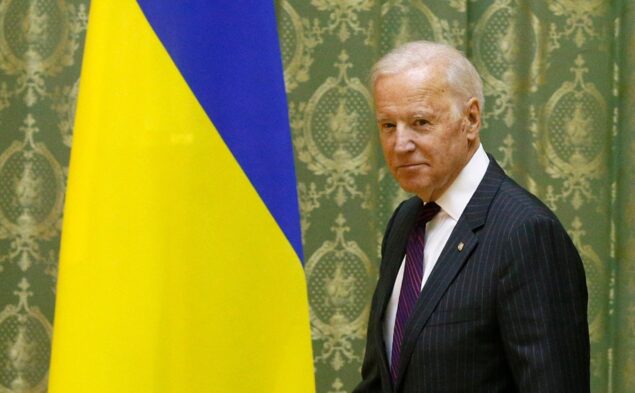 Written exclusively for the New Cold War website, by Dmitriy Kovalevich our regular contributor on what’s happening in Ukraine. In this first update for 2021 Kovalevich considers the country’s reactions to the inauguration of President Biden, ongoing issues with corruption and the population’s reaction to untenable increases in energy prices.

In January, Ukraine’s political elite watched events in the United States closely, eagerly awaiting any comment from the new American administration regarding Ukraine. At the same time, protests flared up across the country against the sharp increase in heating and electricity prices that was announced on January 1, as the IMF demanded.

The former and current presidents of Ukraine—Petro Poroshenko and Volodymyr Zelensky respectively—vied with each other to assure Joe Biden of their allegiance and loyalty. Such assurances of loyalty from Ukrainian politicians seem repellent to both Ukraine’s nationalists and their opponents, as this only goes to emphasize the country’s vassalage and dependency. In January, for the most part the country’s talk shows and experts discussed a single question: will Biden cut financial and military aid to Ukraine? Domestic problems and protests were generally sidelined. News that on January 26 US President Joe Biden had first called the Russian president and not the Ukrainian president, was painfully received by the country’s media and top politicians.

The Ukrainian political scientist Ruslan Bortnik believes that under Biden’s presidency, the country will finally be deprived of its sovereignty, while control from Washington is enforced. “A number of amendments will probably be made [regarding US attitude to Ukraine]. I think the Dems’ team will make additional efforts to ‘de-sovereign’ Ukraine. Control over Ukraine’s economic and political elite will be tightened, anti-corruption and informational tools will be used more actively,” Bortnik said.[1]

However, Radoslaw Czarnecki, a Polish philosopher of the left, says he expects an increase in military supplies to Ukraine and a resumption of the hot phase of the conflict in Donbass. “As for Donbass and Ukraine, the supply of weapons and military equipment, financial and other assistance to the Ukrainian army will be increased. At the same time, the growing number of American military instructors in Donbass will become an impulse that will “unfreeze” and exacerbate this conflict – right up to its transition into a “hot” phase,” Czarnecki concluded.[2]

President Zelensky’s office promises the new US administration (once again) to fight corruption. “Here we will definitely be allies of President Biden in the implementation of anti-corruption measures in Ukraine. President Zelensky is absolutely the best interlocutor for the US President when it comes to Ukraine,” said Deputy Head of the Presidential Office, Igor Zhovkva.[3]

Ukraine’s former president, Petro Poroshenko, pledged just as zealously to fight corruption, but corruption flourished during his rule even more, and the ex-president himself became involved in a number of corruption cases. In December 2015, Joe Biden said in Kiev, addressing Poroshenko, Ukrainian deputies and ministers: “You have one more struggle, a historical struggle against corruption.” As it turned out six years later, these words were mere rhetoric.

According to a survey by the social research group Rating in November 2020, 47% of Ukrainians do not see any results from the fight against corruption, while 37% believe that the situation has worsened.[4]

A September poll by the Razumkov Center showed that anti-corruption bodies are leading in terms of citizens’ distrust – 71% of those asked do not trust them.[5] The reason for the distrust is that anti-corruption bodies, created with the help of the United States, consume billions from the public budget, but their work produces absolutely no visible results. The misappropriated funds are not returned to the budget, and corrupt officials do not end up behind bars. Corruption continues to flourish. The role of these bodies is not to participate in fight against corruption –  they are, in fact, an instrument of influence on Ukrainian politics.

Demanding the results of the fight against corruption from Ukraine’s anti-corruption agencies, created with the help of the United States, is like demanding results from the treatment of a disease by an agent who simply pretends to be a doctor. Ukraine’s corrupt officials are held accountable only if they dare to deviate from the pro-American course. Evidence is collected by the anti-corruption agencies, but nothing is investigated while they are loyal to the US and they are allowed to continue stealing.

In January, the United States imposed sanctions against seven Ukrainian politicians for alleged “interference in the American elections.” The list includes MPs and journalists who, last year, talked about a corruption scheme in Ukraine in which Hunter Biden and the Democratic Party were involved. I wrote about this at length in New Cold War[6].

On January 25, President Zelensky personally proposed to a deputy of the presidential Servant of the People party, Alexander Dubinsky, included in the US sanction list, to withdraw from his faction in parliament, but Dubinsky refused.[7] Since the deputy Dubinsky heads a whole subgroup of deputies in the presidential party, his expulsion could lead to the collapse of the presidential faction itself and a parliamentary crisis. And all this just to please the new US administration.

Now another deputy from the sanctions’ list, Andriy Derkach, claims that he still has many records of the negotiations between Poroshenko and Biden. On this basis he believes that the topic of Ukraine itself will become toxic for the new US president. “Biden’s team generally wants to forget the word “Ukraine”, because every time this word is associated with Hunter, Burisma [Ukrainian gas company, where Hunter Biden received big sums of money], corruption, China, impeachment,” the deputy says. [8]

While Ukraine’s politicians watched the inauguration of the US president with sinking hearts, a wave of protests against the increase of gas and electricity prices swept across the country. Gas prices in Ukraine are already almost 900% higher than those in the seceded republics of Donbass, where they have not been raised since separation in 2014.[9] In Kiev, this difference in prices is explained by the fact that Russia helps Donetsk and Lugansk, but Ukrainians have a question, nevertheless: Ukraine is helped by the entire “civilized world” (EU, USA, Canada, Great Britain), but this “help” constantly leads only to an increase in prices and indebtedness.

Since January 1, heating and electricity bills for many Ukrainians have doubled, while their salaries and pensions have remained almost the same. As a result, the number of debtors is growing. In December 2020, Ukrainians owed $2.4 billion for gas and heating[10].

Initially, the Kiev authorities decided to fight the organizers of the protests with the help of quarantine restrictions—the organizers and participants of the rallies were accused of violating the lockdown, although no charges were brought against the Ukrainian neo-Nazis who blocked the Israeli embassy during the lockdown.

After the lockdown ended on January 25, the organizers of the protests were accused (as they traditionally are) of “working for Russia.” However, the protesters continued to block the roads on a daily basis. In some cities, they stormed regional administrations and broke through police lines. Local authorities largely support the participants in the “gas tariff protests”. Appeals to the president with a demand to reduce the tariff and gas prices have been adopted by the regional councils of almost every region.[11] In fact, we have once more a kind of mild mutiny of Ukraine’s provinces against the central government.

A new poll by Kiev Institute of Sociology from January 26 shows a collapse of popularity for Zelensky and his party following hikes in energy prices for heating, electricity, and natural gas. The failure to start the vaccination programmes (while those in the Donbass republics have already begun) and the discriminatory language law, making the use of Ukrainian mandatory in service industries under the threat of fines have also contributed to the collapse.

The ruling Servant of the People party has dropped to fourth place.[12] It is only preferred by 11% of likely voters, compared with 43% of votes in the 2019 parliamentary elections. The leading position in the poll is occupied by the Opposition Platform, which is backed by 21% of likely voters (the party is labeled as pro-Russian by Western media). Zelensky’s personal popularity has dropped to 20%, compared with 30% of votes in the first round of the 2019 presidential elections. Now 74% respondents believe that the country is going in the wrong direction.[13]

As the political project “Servant of the People” is approaching political bankruptcy, new parties are beginning to emerge in Ukraine. The deputies of the presidential party are already jumping into new projects, funded by the same oligarchs, in order to promise the Ukrainians peace in Donbass, lower tariffs, higher wages and affordable health care once more, but under another political brand.

It looks like this is a trick that can be repeated ad infinitum.