By Jan Oberg, three reports from Aleppo on December 14 and 15, 2016, published on his Facebook page

Sweden peace advocate Jan Oberg is writing from Aleppo and posting many photos on his Facebook page. He is the director of the Transnational Foundation for Peace and Future Research, based in Sweden. 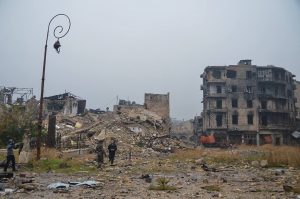 Eastern Aleppo in December 2016 (photo by Jan Oberg on Facebook)

Western media tell you about regime killings and mass murder, only bad things about the Syrian regime. But I saw another side today:

Syrian Arab Army soldiers participate in the humanitarian work at the Jibrin Reception Center in Aleppo that receives people from Eastern Aleppo. All with whom I talked today expressed their joy over their freedom from the four-year siege and for the assistance the government, army and also university student volunteers provide them – as many as 90,000 to 100,000 people.

I was free to talk with and photograph anyone I chose and I was there without any security, police or other protection. Kind and professional officials who thanked me for being in Aleppo exactly now and bringing their stories out. Not one declined to be photographed, many asked me to. 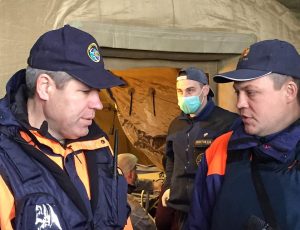 We know that the Western media’s image of Russia in Syria is. Here is another perspective.

These highly professional people [four photos] let me take a few photos in the midst of their work. They have my respect. And they were the only foreign medical team in the Jibrin Reception Centre in Aleppo yesterday the 14th of December 2016.

While Western media deliver streams of “genocide” and massacre news:

Today I visited the Jibrin Reception Center for people from Eastern Aleppo. The misery, poverty and desperation among people who have just come out – 90.000+ – is heartbreaking to put it mildly. I’ve seen quite a lot of suffering in war zones but nothing like this.

Try to SEE these people as fellow human beings and then ask, with me:
*  Why were there no Western media in this center today?
*  Why no Western humanitarian organisations?

Yes, they may be elsewhere, but the needs of these people is much much bigger than Syria can manage alone, even with many volunteers. The people you see here have been under siege by Al-Nushra and many other groups armed by Western countries, financed also by Saudi Arabia and Gulf States and most weapons coming through from Turkey but also from Iraq. It’s a moral crime to ignore these people no matter what else may also have happened these days.

I chose freely whom I would talk with and photograph and went there without any police, military or security.

Vanessa Beeley reports on Dec 15, 2016 on her Facebook page:

One of the reasons for the delay in evacuating the terrorist fighters from inside the remaining area they occupied in East Aleppo was because the Syrian Government was negotiating the release of civilians from the besieged Idlib towns of Kafarya and Foua.

Kafarya and Foua have been under full siege by Ahrar al Sham and Nusra Front since March 2015, with daily sniping and shelling. They are being starved and deprived of any humanitarian aid by the terrorist siege. Over 1700 civilians have lost their lives in this brutal siege. [UN allied with terrorism over deliberate malpractice in Kafarya & Foua, by Vanessa Beeley, 21st Century Wire, Feb 19, 2016.]

We were told last night on our way back from Aleppo that the head surgeon in Foua had been told to prepare for evacuation. Today the Syrian governments efforts for its people paid off:

Hama governor Mohammad al-Hazzouri told SANA reporter on Thursday that 29 vehicles and ambulances and medical teams were sent to the besieged towns of Kafriya and al-Foaa in the countryside of Idleb province to evacuate the humanitarian cases and a number of families. (Syrian Arab News Agency (SANA), Dec 15, 2016)