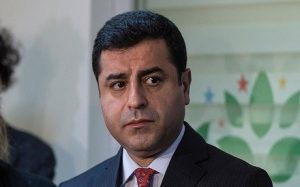 ANKARA – The jailed co-chairman of Turkey’s pro-Kurdish Peoples’ Democratic Party (HDP) refused to attend a court hearing in the capital Ankara on Friday [July 7] because police told him he would have to be handcuffed, his party said.

Selahattin Demirtas, held at a prison in the northwestern province of Edirne, had asked to be present at the hearing but then refused to travel to Ankara in handcuffs, it said. “(Demirtas) stated he was still a lawmaker, that his immunity was still intact, and that he would not attend the hearing if he were put in handcuffs,” a party statement said. It said the prison gendarme told Demirtas they could not take him to Ankara without handcuffs, upon which he returned to his room at the prison.

HDP lawyers left the courtroom in Ankara in protest, a Reuters reporter said, while the public inside the court applauded the decision to handcuff Demirtas. Police dispersed a crowd outside the court.

More than a dozen HDP lawmakers, including the party’s former co-leader Figen Yuksekdag, have been jailed, mostly due to suspected links with the outlawed Kurdistan Workers’ Party (PKK), following an abortive putsch last July. The HDP is the third largst party in the Turkish Parliament, winning just over ten per cent of the vote in the most recent legislative election in Turkey, on November 1, 2015.

“This is an act of civilian coup, Selahattin Demirtas is the chairman of HDP and a lawmaker,” Serpil Kemalbay, who replaced Yuksekdag after her arrest, told reporters. “It is just another dimension of the ongoing injustice, and totally unacceptable”.

“We are protesting this use of force against our chairman and call for freedom and justice for all”.

Prosecutors want Demirtas jailed for 142 years and Yuksekdag for up to 83 years on charges of terrorist propaganda. Demirtas was sentenced in February of thhis year for “insulting the Turkish people, the government and state institutions”.

The HDP also says as many as 5,000 of its members have been detained as part of a crackdown that followed the failed military coup in July 2016. Rights groups say the crackdown targets all dissent.

The government says the HDP is an extension of the PKK, which has waged an insurgency in Turkey’s largely Kurdish southeast for more than three decades. The HDP denies direct links to the PKK, deemed a terrorist organization by Turkey, the United States and European Union.

Demirtas refuses to be handcuffed by Turkish guards; hearing postponed for months

A Kurdish political leader in Turkey who has already spent eight months in custody didn’t appear in an Ankara court on Friday (July 7) after refusing to be shackled.

According to a Peoples’ Democratic Party (HDP) statement, its co-chair Selahattin Demirtas was not brought to the judiciary on Friday morning because he refused to be handcuffed.

The statement added that at 3:40 am, a guard ordered Demirtas to be handcuffed, but Demirtas refused citing immunity as a member of parliament.

Previous interactions between Demirtas, who is being held at Edirne Prison [in northwest Turkey], and the judiciary have been conducted through the voice and video informatics system (SEGBIS).

The hearing is adjourned until November 24. Demirtas was originally detained on November 4, 2016.

A Turkish court sentenced Demirtas to five months in jail on February 21 for “insulting Turkish nation, the state of Turkish Republic and public organs and institutions” in comments he made during a speech in Germany in 2015.

It previously was reported that prosecutors recommended in an indictment that Demirtas and former co-chair Figen Yuksekdag, should serve 43 to 142 and 30 to 83 years in prison, respectively, in line with the scope of a “terror case”.

In February, Yuksekdag was stripped by a court of her status as a member of parliament and in April she was sentenced to one year in prison on terror charges. After losing her MP status, HDP voted Filiz Kerestecioglu as co-chair to fill her vacant position alongside Demirtas.

Ankara believes HDP has ties with the Kurdistan Workers’ Party (PKK), a named terrorist organization and banned party in Turkey.

We will resist injustice!

Yesterday, I told my lawyers that in case of my absence at the court hearing, it must be understood that the only problem would be the fact that I would not accept handcuffs on my wrists in the prison wagon along the way.

I am a parliament member on duty whose parliamentary immunity is still ongoing. I represent the will of people. I find hours-long journey in a prison wagon while being handcuffed illegal and immoral. As I did not accept wearing handcuffs, I was brought back to my cell around 4 am.

Even on a case for which I am not under arrest, I was denied  my right to a fair trial.

As for my case pending trial, the hearing date and the court where I will be prosecuted is still unclear, although it has been eight months.

We will stand up to injustice either way, and we will protect the honor of the people’s will that we represent. 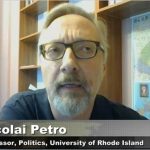 Interview with Nicolai Petro on Ukraine, the West and RussiaFeature Articles, Russia, Ukraine