It’s Clear Why NewsClick Is Being Targeted, and Why it Was Viewed as a Threat 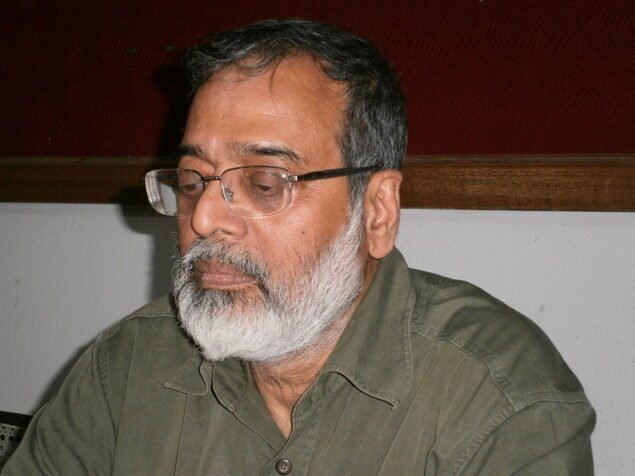 Platforms like NewsClick and the people involved in running it take risks because they want to make the freedom of expression substantive.

I write these lines with the awareness that Enforcement Directorate (ED) personnel left the residence of Prabir Purkayastha and Githa Hariharan at around 1:30 am on Sunday, after the two spent four days in confinement. The ED people were there as part of their raid on the media platform NewsClick, which Prabir had founded. The raid is apparently to find evidence for some economic offence committed by the owners of NewsClick. The big, so-called mainstream media is reporting the raids as routine action by the ED to investigate some economic or financial crime.

One must lament that a newspaper like the Indian Express, on its front page, begins its storyby saying that “The raids on the office of online news platform and the residence of its directors by the ED…are linked to foreign remittances allegedly totalling Rs 30.51 Crores, The Indian Express has learnt.”

The raids were still on, but the news item gave you a details of the entities which have supported or funded NewsClick and also give you the breakup of the amount that each one of them had remitted to the media platform. It informs you that three such entities share the same address. Also that the ED people could not get clarity about the services that were rendered to these entities in return of the money that they gave to NewsClick.

In the tradition of the best journalistic tradition, Prabir, the director and Pranjal, the editor, are sent texts, emails but there is no response from them! How can you blame the story for not carrying the version of the other side?

Do the reporters not know that Prabir would not be able to use his phone or email, as the ED is in the process of seizing them? How fair then is it to carry the version given by the ED officials, when the raids are still on and the other party cannot even give its facts?

The career and social or public life of Prabir hardly counts. It is irrelevant that the raids are taking place in a context. NewsClick has been very proactive in reporting the farmers’ movement. Its ground reports and analytical videos are being viewed by millions. A government hell bent on creating a bubble in which no information or thought is permitted, lest its nationalist character be breached, would take recourse to all means to prevent a breach in this bubble.

Platforms like NewsClick and the people involved in running it take risks because they want to make the freedom of expression substantive. It is vitally linked to the people’s right to know. The famous Hindi song ‘Yeh public hai, yeh sab jaanti hai (This is the public, it knows everything)’ is based on a wrong understanding of the innate power of the public. The public, on most occasions, barely knows what is going on in this world. Modern economic and political processes have become so complex and that it is impossible for the public to decipher and make a sense of them.

The public needs to be kept informed, and then provided with tools to process information. It needs analytical resources. It is not the powers which need to be told the truth, but the public. Only an informed public can make governments accountable.

What governments often do instead is to steal the mandate given by the people to serve big money. When people protest, they are scolded for not keeping pace with the times. Platforms NewsClick disrupt the information bubble that the government and big media want us to be in, and are therefore dangerous. They need to be disabled.

The most effective way to do this is to ruin their reputation and put their legitimacy in doubt. What better way than to make them look financially corrupt? This is how the reputation of Teesta Setalvad was smeared and Amnesty India made dysfunctional. Amnesty India was raided by the ED and other agencies, and charges made that it was involved in money laundering. It was made impossible for the organisation to function. Finally, Amnesty India was forced to close shop in India. Whose loss was its closure? It had documented the atrocities of the Indian state on the Kashmiri people and also exposed the role of the Delhi police in the violence that had rocked Delhi last year.

NewsClick is also facing the wrath of the regime for telling the truth to the people. We should not be confused about it. Supriya Sharma, Mrinal Pande, Rajdeep Sardesai, Zafar Agha, Vinod Jose, Mandeep Punia, Vinod Dua, Ismat Ara and others too are being persecuted not for spreading ‘dangerous rumours’, but because the regime views them as a threat. Neither is The Caravan facing criminal charges for doing any illegal act.

It is not the luxury of freedom of expression that NewsClick wants to enjoy. It is engaged in the hard work of reporting from the ground, showing the real pictures which the so-called mainstream media is conspiring to hide. In the current farmers’ movement, the big media has been put on the defensive by the struggling masses. It is the parallel media which now threatens to be recognised as the mainstream, the truthful storyteller.

The government doesn’t want this. Our friends at NewsClick are suffering because of this – and not any financial misdeed. It is heartening to see the website working round the clock despite this onslaught.

While I write this, I try to understand how words can be celebrated, how literature can become a matter of festivity, when novelist Githa Hariharan is made to face this atrocity. How is it that even after four days, nobody from the community of writers has thought it fit to utter a word? Is this how we mobilise a community of courage?