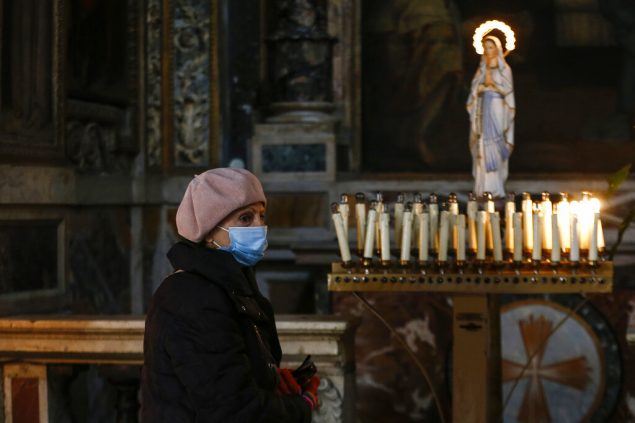 Even as the rates of infection go down, Italy has a long way to go. So far, about 14,620 people have recovered from the virus, leaving about 70,000 still sick. While the worst may be nearing an end for Italy, that’s likely not the case for other European countries.

For the past 37 days, Italy has lived a national nightmare after it discovered an outbreak of the novel coronavirus in a number of towns in the northern regions of Lombardy and Veneto.

And this nightmare is far from over: On Monday, Italy reported 812 new deaths, bringing its total death toll to 11,591, the highest in the world.

But glimmers of hope are appearing and Italians have reason for optimism: The number of newly infected people is on a downward trend.

On Monday, Italy reported 1,648 new infections, its biggest decrease after several days of declining numbers. Officials also said the number of people needed to be admitted into intensive care units is slowing, giving much needed relief to overwhelmed hospitals.

Italy also reported another hopeful number: 1,590 people who got the infection have recovered, the biggest single-day number of recoveries yet.

“We’re going in the right direction,” said Franco Locatelli, the head of a health council advising the government, at a daily briefing. “The number of positive tests is going down even though testing isn’t decreasing.”

The president of Lombardy, the hardest-hit region where Italy’s financial capital of Milan is located, was hopeful too.

“We can’t let our guard down, but we’re on the right track,” Attilio Fontana told reporters on Monday.

In Milan, the number of new infections rose by 154 cases – about 400 fewer than the day before. In other cities where the virus has struck with particular ferocity – Bergamo and Brescia – new infections are way down too, about 20 new cases in each city.

But don’t expect the daily number of deaths to fall quickly, Italians officials warned. They said the death toll likely will continue to be high because there are so many people still infected and in intensive care.

Even as the rates of infection go down, Italy has a long way to go. So far, about 14,620 people have recovered from the virus, leaving about 70,000 still sick.

While the worst may be nearing an end for Italy, that’s likely not the case for other European countries.

Spain is the European country now reporting the most new infections and a death toll similar to Italy’s. On Monday, the number of victims in Spain rose by 812 to a total of 7,340. It also reported 6,398 new cases for a total of 85,195 confirmed infections. 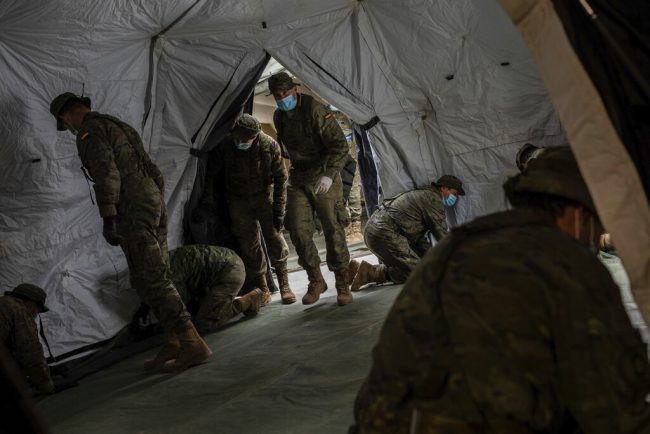 Spanish Army soldiers mount a tent to be used for coronavirus hospital patients in Madrid on Monday. (AP Photo/Bernat Armangue)

France, the United Kingdom, Belgium and Germany, among others, are reporting spikes in infections and deaths. On Monday, France reported its worst daily death toll with 418 new deaths, taking the total to 3,024.

Health experts say countries may be days or even weeks behind an explosion of cases similar to what Italy has experienced. Beyond the European Union, Russia and Turkey are also beginning to report a steady increase in cases.

At the beginning of March, a go-to American university’s interactive map tracking the novel coronavirus showed only one big red dot – an indication of a severe outbreak – outside of Asia: That big red dot was superimposed ominously on Italy.

Now, much of the world is covered in big red dots on the map produced by Johns Hopkins University. Increasingly, Covid-19 is spreading across the globe, bringing with it a wave of sickness and death.

Italy’s nightmare began during the height of its Carnival celebrations and quickly put an end to festivities in Venice.

On Feb. 23, two days before Fat Tuesday, which marks the end of the Carnival season, Italy imposed a lockdown on several towns in the northern regions of Lombardy and Veneto after discovering a cluster of Covid-19 cases.

Shortly afterward, schools across Italy were closed and then a lockdown was extended to all of Italy on March 10. Many other countries have followed Italy’s example since then.

Italy finally appears to be reaching that point, experts say.

Pierpaolo Sileri, a deputy health minister, said in a blog post that he was “living on a see-saw” between hope and realistic analysis of the data.

“The curve of infections is growing but it is becoming more linear, regular,” he said. At this pace, he said the peak may be reached between seven and 10 days.

Still, even if Italy may be able to claim in the days to come that it has managed to contain the virus, it will take a lot of work to make sure Covid-19 doesn’t reappear.

Dr. Michael Ryan, the head of emergency programs at the World Health Organization, said during a news conference that Italy and other countries will need to do what China did to make sure that the virus doesn’t reemerge. In China and other Asian countries, health officials have done rigorous testing to find people infected with the virus and isolate them.

“The question is how do you go down [to no new infections],” he added. “Going down isn’t just about a lockdown and letting go. It will not go down on its own. It will go down by being pushed down.”

Already, the debate in Italy is turning to when and how restrictions can be eased both to get its devastated economy going again and allow citizens to return to lives beyond the confines of their homes. With the health crisis still so intense, government officials have not set out how or when they plan to lift restrictions. Experts say reopening Italy is still weeks away and should be done gradually and in a planned fashion.

On Monday evening, the Italian government extended the nationwide lockdown from April 3 to April 12, which is Easter Sunday.

Main photo: A woman wearing a mask walks past candles at the Santa Maria ai Monti church, in Rome Sunday, March 29, 2020. The new coronavirus causes mild or moderate symptoms for most people, but for some, especially older adults and people with existing health problems, it can cause more severe illness or death. (Cecilia Fabiano/LaPresse via AP) 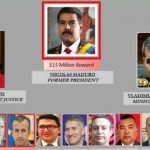 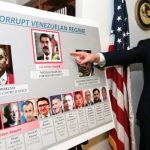