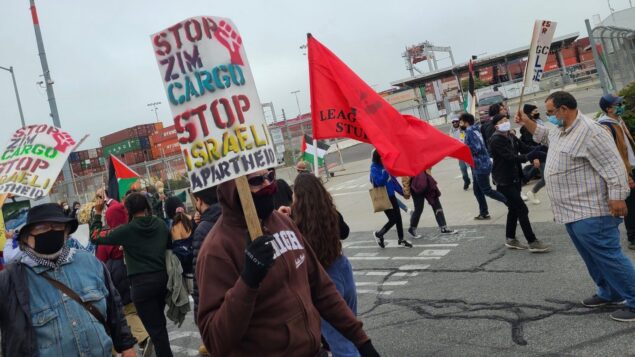 Over a 1,000 people participated in the picket line set up at the port of Oakland, which successfully blocked two Israeli cargo ships from docking. Photo: AROC/Twitter

Trade unions and social movements in the US and Canada have joined hands with Palestinian groups and are picketing major ports to prevent Israeli ships from docking.

In a major push to hold Israel accountable for its crimes on Palestinians, activists and workers’ movements have put up picket lines on key ports in the United States and Canada to block entry for Israeli ships. As part of an international call for an International Week of Action between June 2 and 9, thousands have held protests in major ports in North America, disrupting operations and blocking ships operated by Israeli cargo companies from docking.

Protests have been held at the ports of Oakland and Los Angeles in California, Seattle and Tacoma in Washington, Houston in Texas, and New York City/New Jersey, among other places so far, while more pickets and demonstrations are planned for other parts of North America.

A large part of the campaign is targeting incoming ships operated by the Israel-based Zim Integrated Shipping Services Ltd or ZIM, one of the world’s largest shipping companies. ZIM has been tied to the settler-colonial project of Israel for most of its existence, having been one of the shipping and transportation companies to transport early Zionist settlers. Today it is one of the biggest transporters of weapons to and from Israel.

Oakland witnessed the first of these pickets and prevented two ZIM ships from docking so far. This is the first time ZIM has attempted to use Oakland port since 2014, when pro-Palestinian activists blocked its ships from docking for months. The first ship to be sent back by the protesters this time around was on June 2, after dockworkers’ union joined hands with local community organizers to a picket call by Block The Boat, a coalition initiated by the Arab Resource and Organizing Center (AROC).

More than an estimated 1,000 people showed up to the port to prevent the docking of the ships, on Friday, when the second ZIM-owned cargo ship was sent back. The picket line was led by the Oakland dock workers’ chapters of the International Longshore and Warehouse Union (ILWU Local 10) and was supported by more than 30 organizations.

“Back up! Back up! We want Freedom, Freedom! All these Zionist attacks, we don’t need ‘em, need ‘em!” #BlockTheBoat #BDS #EndIsraeliApartheid #Oakland pic.twitter.com/ctnsU4IjKQ

Historic victory for #BlockTheBoat & #BDS! After 2 blockades honored by ILWU Local 10, we have successfully turned away the apartheid-profiteering ZIM shipping line from the port of Oakland. The International Week of Action continues to ensure that ZIM is turned away everywhere! https://t.co/EnHs2gGVUh

“Workers’ struggle is worldwide,” said ILWU Local 10 president Trent Ellis, as the second ship was sent back. “When the workers of the world figure that out, and realize that we have to band together to make change, then it will be a better world, including for the Palestinian people.”

On the other coastline, in the Port of New York, hundreds of community organizers and trade unionists formed a picket line, on Sunday, June 6, at the docks to block the scheduled arrival of another ZIM cargo ship. The picket happened despite heavy police presence and armored vehicles, sent by the police departments of New York City and New Jersey.

According to reports, there was an initial stand-off between protesters and the police, as the latter were refusing the picketers from entering the docks. But eventually the protesters prevailed as the numbers kept swelling. Similar demonstrations are happening elsewhere, with more pickets planned for ports like Detroit, Michigan, in the US and Vancouver in Canada in the coming days.

UPDATE: The police have backed down.

Hundreds of pro-Palestine protesters have now set up a picket line outside of the Port of New York where an Israeli-owned cargo ship is scheduled to unload goods today. pic.twitter.com/KRHq7uh8l6

VANCOUVER #BlockTheBoat UPDATE: Tuesday, June 8th @ 3PM! You are needed at Woodland Park to make sure the Israeli ZIM ship can’t dock anywhere on the west coast! Text your name to (833) 590-1987 to get the latest updates! #BDS #EndIsraeliApartheid pic.twitter.com/ugAT8eBUPO

These movements are responding to the call for action around the world by the Palestine General Federation of Trade Unions (PGFTU), in response to the recent Israeli aggression on Gaza and West Bank. Dock workers in Italy’s Livorno and across South Africa also heeded the call for action and boycotted Israeli cargo ships.

Elias Al-Jelda, member of the Executive Committee of the PGFTU, in a statement warmly received the news from Oakland. “It warms our hearts in the besieged occupied Gaza Strip & the rest of occupied Palestine that our comrades led by AROC and with the solidarity of our fellow workers in ILWU Local 10, achieved this great Block the Boat victory against ZIM in Oakland,” the statement read.

“We call upon all dockworkers worldwide to intensify the boycott campaign against ZIM ships and all business profiting from apartheid Israel, in solidarity with our people’s struggle for freedom and justice in Palestine.”