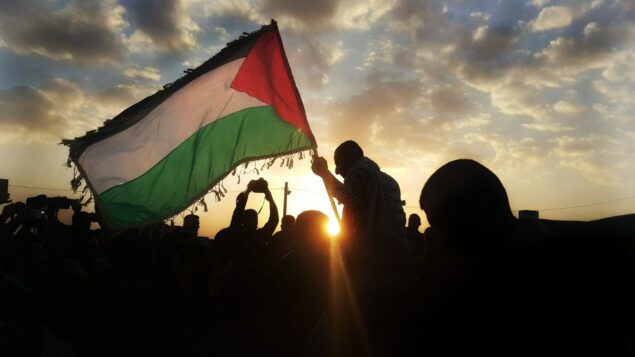 We call upon the international community to intervene immediately in order to stop Israel’s current aggressions, to adopt the demands of the Palestinian Boycott, Divestment and Sanctions movement; to work towards the actualization of the Palestinian Right of Return and to bring about historic justice; to reach a just and democratic solution for all, based on the decolonization of the region and founding a state of all its citizens.

We, Jewish Israelis, oppose the actions of the Israeli government and hereby declare our commitment to act against them. We refuse to accept the Jewish-supremacist regime and call upon the international community to immediately intervene in defense of the Palestinians in Gaza, the West Bank, Jerusalem, the Galilee, the Negev, al-Lydd, Yafa, Ramleh, Haifa and throughout historic Palestine.

Jewish supremacy is the cornerstone of the Israeli regime, and its consistent objective is to transfer and obliterate the Palestinian people, their history, and their national identity. This objective manifests in continued acts of ethnic cleansing by means of evictions and home demolitions, brutal military occupation, denial of civil and human rights, and legislation of a series of racist laws culminating in the Nation-State Bill, defining the State as “the Nation State of the Jewish People”, and them only.

All the above effectively form an Apartheid regime creating Bantustan-like and Ghetto-like areas for Palestinian native communities. We believe that Zionism is an unethical principle of governance that inherently leads to a racist Apartheid regime that has been committing war crimes and denying basic human rights from Palestinians for over seven decades. Such crimes and violations include: the destruction of hundreds of towns and villages and depopulating them of 750,000 Palestinians in 1948, alongside the active prevention of return of refugees; the systematic expropriation of Palestinians’ lands and transferring them to Jewish ownership under the auspices of the state; the occupation of the West Bank, the Gaza Strip, and the Golan Heights and the application of a colonizing military regime, ruling over millions of Palestinians; the gradual annexation of the territories occupied in 1967 by violently engineering demographics; the ongoing siege on the Gaza strip and persistent massacres of the Gazan population by the Israeli Air Force; political persecution of Palestinians throughout Palestine and the ongoing incitement against the political leadership and society at large; All of these atrocities take place due to the impunity Israel receives from the international community and especially the United States.

In recent weeks, the Israeli government has up-scaled its attempts to seize Palestinian homes in East Jerusalem (especially in the Sheikh Jarrah neighborhood) and house Jewish settlers in them with the aim of completing the Judaization of the city that began in 1967. During the month of Ramadan, Israeli forces intensified their violent onslaught on the Al Aqsa Mosque compound while giving settlers the green light to vandalize and physically harm Palestinians in the West Bank, Jerusalem and throughout the ’48 territories. Mobs of settlers are acting under the auspices, and in coordination with the Israeli police. Israeli media is taking part in the unhinged incitement against Arab citizens of Israel. As a result, the Jewish mobs receive impunity for their violence, while hundreds of Palestinian citizens of Israel are arrested for protecting their homes and communities, or simply for being at the wrong place at the wrong time.

As we write this statement, Israel is committing yet another massacre in the Gaza ghetto. Israel has declined several third-party offers to negotiate a cease-fire agreement with Hamas officials, and has continued to bomb neighborhoods in Gaza. The inhumane siege on approximately two million people continues.

As individuals who belong to the side of the oppressor, and that have tried for years to shift public opinion in Israel in order to change the foundations of the current regime, we have long come to the conclusion that it is impossible to change the Jewish supremacist regime without external intervention.

We call upon the international community to intervene immediately in order to stop Israel’s current aggressions, to adopt the demands of the Palestinian Boycott, Divestment and Sanctions movement; to work towards the actualization of the Palestinian Right of Return and to bring about historic justice; to reach a just and democratic solution for all, based on the decolonization of the region and founding a state of all its citizens.