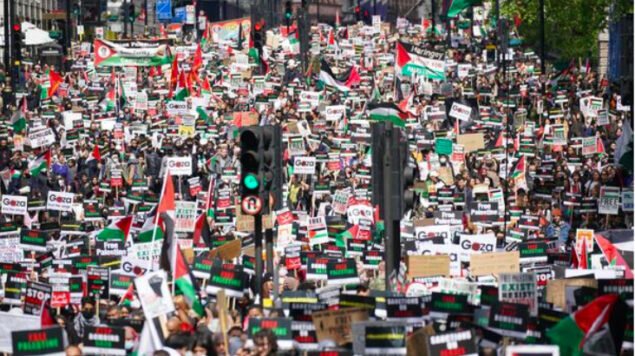 Protesters walk along Piccadilly in central London, during a march in solidarity with the people of Palestine last week.

The Israeli foreign ministry has described as “outrageous” and “baseless” Ireland’s vote to declare Israel’s settlement in Palestinian territory as an illegal annexation.

By Elaine Loughlin and Daniel McConnell

The Israeli foreign ministry has described as “outrageous” and “baseless” Ireland’s vote to declare Israel’s settlement in Palestinian territory as an illegal annexation.

Ireland has become the first EU country to declare that the Israeli settlement in Palestinian territory amounts to illegal annexation, after a Dáil motion received cross-party support.

Taoiseach Micheál Martin told his Fianna Fáil colleagues the widespread support for the motion on the de facto annexation by Israel shows the strong stance taken by the Government and the Dáil on what is a very important issue.

The motion also condemns the displacement of the protected Palestinian population and states that the expansion of Israeli settlements over decades represents a flagrant violation of international law.

However, a spokesperson for the Israeli Foreign Ministry said: “Israel outright rejects Ireland’s outrageous and baseless position regarding Israeli communities in Judea and Samaria.

“This position reflects a blatantly one-sided and simplistic policy and follows the unacceptable anti-Israel statements that were heard in Ireland at a time when the citizens of Israel were being subject to terror attacks by the more than 4,000 rockets that were launched from the Gaza Strip by the Hamas terrorist organization.

“The motion that was adopted in the Irish parliament constitutes a victory for extremist Palestinian factions. This motion distances Ireland from its ambition to contribute and play a constructive role in the Israeli-Palestinian context.”

Sinn Féin’s foreign affairs spokesperson John Brady, who tabled the motion, described the vote as “an historic moment” and “a victory for justice” which recognises the right of the Palestinian people to self-determination.

He said the passing of the motion on annexation is a true reflection of the strength of feeling that runs in this country at the treatment of the Palestinian people by the apartheid state of Israel.

“Ireland now stands as the first country in Europe to categorically state without equivocation that Israel has carried out the crime of annexation in the occupied Palestinian Territories,” he said after the vote.

A solidarity-PBP amendment to the motion, which sought to expel the Israeli ambassador from Ireland, did not pass.

Ahead of the vote last night, Fianna Fáil’s Dara Calleary told a private party meeting that he now wants to see the Occupied Territories Bill put back on the agenda.

The Bill, which would ban imports from illegal Israeli settlements in Palestinian territories, had passed through the Seanad and was awaiting committee stage scrutiny when last year’s general election was called.

Sadaka, Trócaire, Christian Aid Ireland and the Irish Congress of Trade Unions (ICTU) have welcomed the passing of the Dáil motion.

The organisations said they “hope and expect” other parliaments will now follow Ireland’s lead in this condemnation and in calling Israel to account.

Caoimhe de Barra, Trócaire CEO said: “This motion is historic, as Ireland is the first EU country to call out Israel’s settlement activity for what it is – the annexation of Palestinian land.

“Given the EU remains divided in its willingness to censure Israel’s human rights violations, unilateral action like this is essential. We urge Ireland now to go further and become the first EU country to ban trade with those settlements by enacting the Occupied Territories Bill,” she said.

During a debate ahead of the vote, the Government tabled an amendment to include a condemnation of the actions of Hamas as well as those on the Israeli side, which was adopted.

He told the Dáil that a return to “business as usual” and the expansion of illegal settlements in the occupied Palestinian territory cannot be accepted.