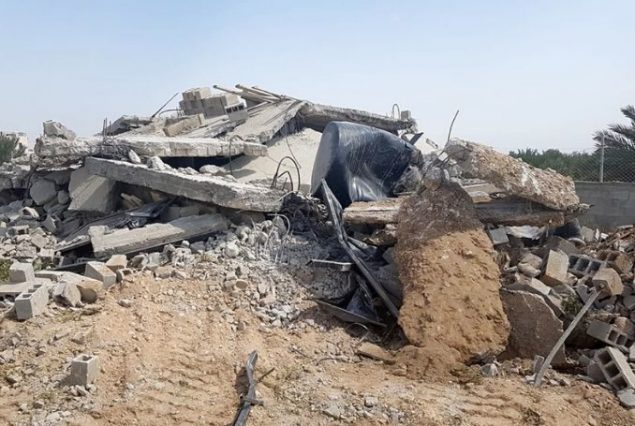 Israeli forces entered the Palestinian village of Khirbet Ibziq to confiscate materials designated to build a clinic to deal with the novel coronavirus outbreak. (Photo: File)

Israeli forces on Thursday entered a Palestinian village in the northern Jordan Valley to confiscate materials designated to build a clinic to deal with the novel coronavirus outbreak.

Israeli forces on Thursday entered a Palestinian village in the northern Jordan Valley to confiscate materials designated to build a clinic to deal with the novel coronavirus outbreak.

Officials from the Israeli Civil Administration came to the village of Khirbet Ibziq with a military escort, bulldozer and two trucks equipped with cranes on Thursday morning to demolish community clinic and emergency housing, according to Israeli human rights monitor Btselem.

The group reported that Israeli officials seized poles and sheeting designated to form eight tents, two for a field clinic, two for a mosque, and four for emergency housing for people evacuated from their homes.

A power generator, as well as supplies of sand, cement and cinder blocks to be used for the floor of the tents, were also confiscated.

Btselem said the villagers were building a first-aid community initiative to deal with the Covid-19 crisis which has paralyzed large parts of the southern West Bank. There are 91 confirmed cases so far in the Palestinian territories, with one death reported on Wednesday.

The Jordan Valley covers an area of about 1.6 million dunams (1,600 km2) and constitutes around 30 percent of the total occupied West Bank. According to a previous government report, the Valley includes about 280,000 dunams of arable land, 50,000 of which are still used by Palestinians and 27,000 by illegal Jewish settlers.

The majority of the Jordan Valley is under full Israeli military control, despite being within the West Bank. Meanwhile, at least 44 percent of the total land in the Jordan Valley has been reappropriated by Israeli forces for military purposes and training exercises.