Israeli Apartheid? Look No Further Than This Racist Law 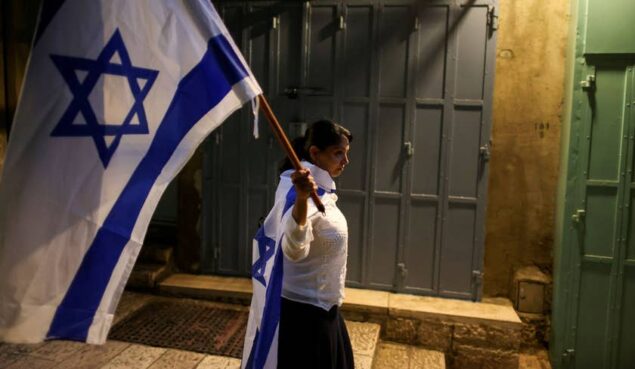 A woman carries an Israeli national flag as she walks in an alley in Jerusalem’s Old City, June 2021.Credit: RONEN ZVULUN/ REUTERS

Some laws are a blot on Israel’s lawbooks, and until they are removed Israel cannot be considered a democracy. One of the more despicable ones is the law that prevents its Arab citizens from unifying their families.

Some laws are a blot on Israel’s lawbooks, and until they are removed Israel cannot be considered a democracy. One of the more despicable ones is the law that prevents its Arab citizens from unifying their families.

When a discussion of whether Israel is an apartheid state arises, and its propagandists claim that it isn’t, they cite as proof the absence of any racist laws in the country’s lawbooks. The law that will most likely be reaffirmed this week, for the 18th consecutive time, is definitive proof of the fact that not only are there apartheid practices in this country, there are apartheid laws here as well. “It’s best not to avoid the truth: Its existence in the lawbooks makes Israel an apartheid state,” wrote Haaretz publisher Amos Schocken in 2008. Thirteen years have passed, and this statement is truer than ever.

This law tells the whole story: It epitomizes the essence of Zionism and the concept of a “Jewish state;” it reflects the dubious security-related pretexts that sanitize any abomination in this country; it exemplifies the astounding similarity between the ultra-nationalist right and the Zionist left, and the devious use Israel makes of emergency and temporary measures. A law that was passed as a temporary measure in 2003, which was considered in 2006 by Supreme Court Justice Edmond Levy as a law about to expire within two months, is celebrating 18 years of existence.

The law has now become the subject of a duel between the government and the opposition, where it’s clear that the right-wing opposition will support the extension of this law – racism trumps anything else – with no one dealing with the law’s substance and its impact on Israel’s image.

To put it briefly: After the Law of Return, this is the law that exemplifies more than any other the domination of Jewish supremacism in this country. A Jew can share his life with whomever he or she chooses, and an Arab can’t. Just like that, despairingly and painfully simple. Any country that treated its Jewish citizens like that would be reviled.

A young man from Kafr Qasem who falls in love with a woman from the West Bank city of Nablus cannot live with her in his country, Israel. A young man from neighboring Kfar Sava can live in his country with whomever he pleases. A woman from the settlement of Itamar, which overlooks Nablus, can in theory marry someone from the Kenyan Masai tribe or a Hindu from Nepal. She may face some difficulties, but the path is open to any Jewish Israeli citizen to fulfill their couplehood in their country – I know this from my own experience.

This is not the case when it comes to an Arab citizen wishing to live with someone from the opposite sex, someone who might live five minutes away by car, often a cousin.

The 1967 Green Line, by now almost completely effaced, still exists when it comes to Arabs. This disgrace is wrapped in existential and security-related excuses about terror and a demographic threat. There is no end to the fear-mongering and descriptions of impending threats to Israel: Thousands of terrorists will sweep through this country and destroy it. Every Israeli Arab will marry eight women from the West Bank and Gaza Strip and the Jewish majority will be lost forever.

Above all this looms a (supposed) state of emergency, which produced this law in the first place. It’s only temporary, it will be terminated in a year or two, just like the occupation, the mother of all everlasting temporariness.

No less amazing is the conduct of the Labor Party with regard to this law. It is always in favor of extending it, be the party left-wing or not; it’s always accompanied by sanctimonious hand-wringing and righteous sighs. In 2016, Labor MK Nachman Shai, a quintessential spokesman of Mapai sanctimony, said he was not convinced of the law’s necessity, but that his party would support it.

Within six months, he was promised, there would be a serious discussion of its necessity. A year passed, and Shai again supported the law’s extension, this time waxing lyrical: “We’ll support the law while constantly keeping in mind that it relates to people who must be shown respect.” How? With baklava?

Shai is now minister for Diaspora affairs – only the Jewish Diaspora, obviously – and his party will again support this law, only once more, just temporarily, only for the sake of the country’s Jewish existence and security.

To state it clearly: If Labor and Meretz support this law, there is no Zionist left here. If the law passes, the state is not democratic and Jewish. The moment of truth is nigh, and the end is so foretold.