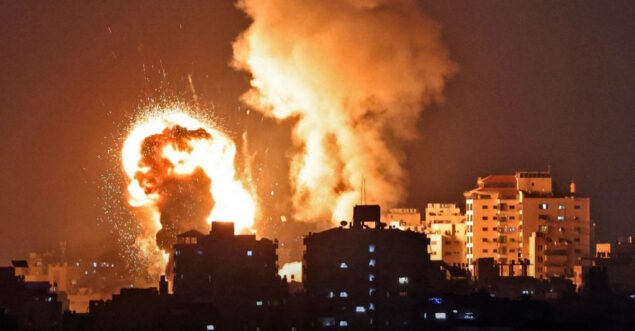 Media coverage of heightened violence in Israel/Palestine has misrepresented events in the Israeli government’s favor by suggesting that Israel is acting defensively, presenting a false equivalency between occupier and occupied, and burying information necessary to understand the scale of Israeli brutality. 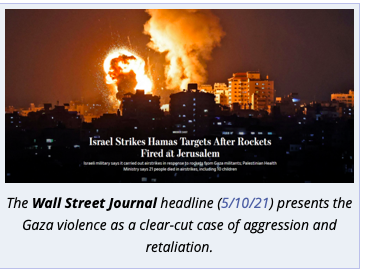 Media coverage of heightened violence in Israel/Palestine has misrepresented events in the Israeli government’s favor by suggesting that Israel is acting defensively, presenting a false equivalency between occupier and occupied, and burying information necessary to understand the scale of Israeli brutality.

Corporate media have presented Israel’s killing spree as defensive, as a reaction to supposed Palestinian aggression. A Financial Times headline (5/10/21) read, “Hamas Rocket Attacks Provoke Israeli Retaliation in Gaza.” The New York Times’  description (5/12/21) was, “Hamas launched long-range rockets at Jerusalem on Monday evening, prompting Israel to respond with airstrikes.” An article in Newsweek (5/12/21) had it that “Hamas rained down rockets on Israeli civilian targets, and the Israeli military responded with surgical air strikes against Hamas and Palestinian Islamic Jihad targets in Gaza.” A CNN headline (5/12/21) said, “At Least 35 Killed in Gaza as Israel Ramps Up Airstrikes in Response to Rocket Attacks.”

The Wall Street Journal (5/12/21) ran the headline, “Hamas Attack on Israel Aims to Capitalize on Palestinian Frustration,” which makes it sound as if Israel were simply minding its own business and Hamas lashed out for no reason. The Journal reinforced this impression by describing Israel’s bombing of Gaza as merely a “response” to and a “counterstrike” against the rockets from Palestinian resistance factions.

Imagine for a moment that the entire history of Israel/Palestine began on May 10. Even then, Hamas’ rocket fire was a follow through on its promise (Ynet, 5/10/21) to fire rockets in “response” to and “retaliation” against Israel if the latter didn’t remove its forces from the Jerusalem neighborhood of Sheik Jarrah, where Israel has been attempting to force Palestinians from their homes and repressing the resultant protests, and from the Al-Aqsa Mosque compound, which Israel had just raided during Ramadan, Islam’s holiest month (Jacobin, 5/14/21).

More to the point is that Israel, and its forerunners in the Zionist movement, have been carrying out a war against Palestinians for over 100 years, so Israeli self-defense against Palestinians is a logical impossibility (Electronic Intifada, 7/26/18). As an occupying power, Israel does not have a legal right to claim self-defense against the people it occupies (Truthout, 5/14/21). Israel has been subjecting Gaza to a military siege for 12–14 years, depending on the metric one uses to determine the starting point, which has left the territory effectively unlivable (Jacobin, 3/31/20); a siege is an act of war, so the party enforcing it cannot claim to be acting defensively in response to anything that happened subsequent to the start of the blockade. 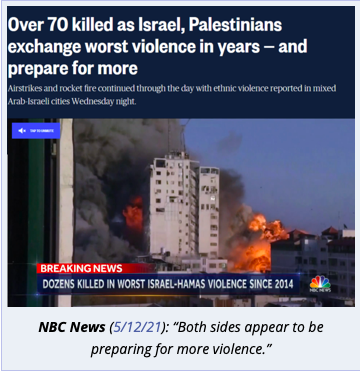 Similarly, media have had a long-runningtendency to amplify the view that violence across historic Palestine should be understood as roughly equivalent fighting on “both sides.” This remains a commonplace feature of the coverage, exemplified by NBC headline (5/12/21), “Over 70 Killed as Israel, Palestinians Exchange Worst Violence in Years.”

A Washington Post editorial (5/11/21) was headlined “New Israeli/Palestinian Fighting Serves Political Agendas on Both Sides.” It said that “the worst conflict in years has erupted between the two peoples, with Palestinian missiles raining down on Israeli cities and airstrikes rocking the Gaza Strip.”

The word “clash” is frequently employed to avoid acknowledging that violence is overwhelmingly inflicted by one side on the other, as in headlines like Reuters‘ “Israeli Police, Palestinians Clash at Jerusalem’s Al-Aqsa, Scores Injured” (5/8/21). The headline gives no clue that 97% of the injuries were being suffered by Palestinians.

The fatal flaw in the “both sides” narrative is that only the Israeli side has ethnically cleansedand turned millions on the Palestinians’ side into refugees by preventing them from exercising their right to return to their homes. Israel is the only side subjecting anyone to apartheid and military occupation. It is only the Palestinian side—including those living inside of what is presently called Israel—that has been made to live as second-class citizens in their own land. That’s to say nothing of the lopsided scale of the death, injury and damage to infrastructure that Palestinians have experienced as compared to Israelis, both during the present offensive and in the longer term. 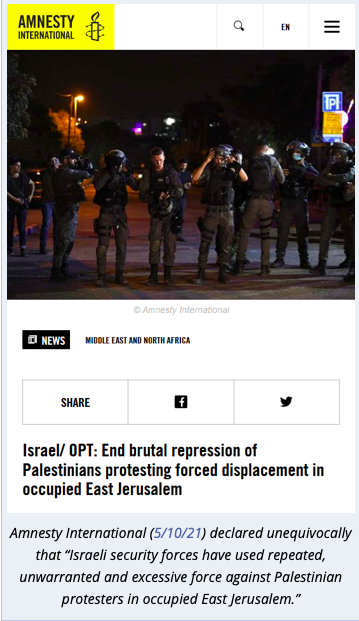 The “both sides” approach, however, permeates the coverage. The New York Times (5/12/21) relied on a bogus symmetry between oppressor and oppressed, with Jerusalem bureau chief Patrick Kingsley writing:

For weeks, ethnic tensions had been rising in Jerusalem, the center of the conflict. In April, far-right Jews marched through the city center, chanting “Death to Arabs,” and mobs of both Jews and Arabs attacked each other.

“Evidence gathered by Amnesty International reveals a chilling pattern of Israeli forces using abusive and wanton force against largely peaceful Palestinian protesters in recent days. Some of those injured in the violence in East Jerusalem include bystanders or worshipers making Ramadan prayers,” said Saleh Higazi, deputy director for the Middle East and North Africa at Amnesty International.

“The latest violence brings into sharp focus Israel’s sustained campaign to expand illegal Israeli settlements and step up forced evictions of Palestinian residents—such as those in Sheikh Jarrah—to make way for Israeli settlers. These forced evictions are part of a continuing pattern in Sheikh Jarrah, they flagrantly violate international law and would amount to war crimes.”

Eyewitness testimonies—as well as videos and photographs taken by Amnesty International’s researchers on the ground in East Jerusalem—show how Israeli forces have repeatedly deployed disproportionate and unlawful force to disperse protesters during violent raids on Al-Aqsa mosque and carried out unprovoked attacks on peaceful demonstrators in Sheikh Jarrah.

Israel is also facing an internal conflict, as pro-Palestinian Arab residents clashed with their Jewish neighbors in mixed towns, prompting the government to bring in border police troops to quell riots.

The reality is that Israeli police have violently assailed Palestinian demonstrators across Israel. That the Palestinians arrestees have been denied legal rights and necessary medical treatment is also omitted.

Another Journal (5/12/21) article referred to “Palestinian anger over what they see as years of efforts to push them out of Jerusalem and limit their access to land they claim, as well as infringing on their basic rights.” Yet these views are not simply a matter of “what [Palestinians] see as” discrimination. As Human Rights Watch (5/11/21) noted:

Nearly all Palestinians who live in East Jerusalem hold a conditional, revocable residency status, while Jewish Israelis in the same area are citizens with secure status. Palestinians live in densely populated enclaves that receive a fraction of the resources given to settlements and effectively cannot obtain building permits, while neighboring Israeli settlements built on expropriated Palestinian land flourish.

Israeli officials have intentionally created this discriminatory system under which Jewish Israelis thrive at the expense of Palestinians. The government’s plan for the Jerusalem municipality, including both the west and occupied east parts of the city, sets the goal of “maintaining a solid Jewish majority in the city” and even specifies the demographic ratios it hopes to maintain. This intent to dominate underlies Israel’s crimes against humanity of apartheid and persecution.

I looked at Gaza coverage during the first four days of Israeli airstrikes and Palestinian rocket fire, focusing on the databases of the five US newspapers with the highest circulation: The Wall Street Journal, USA Today, The New York Times, The Washington Post, and Los Angeles Times. Crucial aspects of what is happening in Gaza have been severely underreported.

For instance, Israel closed Kerem Shalom Crossing on May 10, “blocking the entrance of humanitarian aid and fuel destined for Gaza’s power plant” (Gisha, 5/12/21). Kerem Shalom is also Gaza’s main commercial crossing, which means that the closure will further devastate Gaza’s economy, already in ruin thanks to the Israeli siege. Between May 10 and May 13, the five newspapers published a combined 114 articles that refer to Gaza. Only two pointed out that Israel has tightened the siege during the bombing campaign. The New York Times (5/10/21) ran an article that noted that Israel “shut a key crossing between Gaza and Israel,” but said nothing about the consequences of doing so. 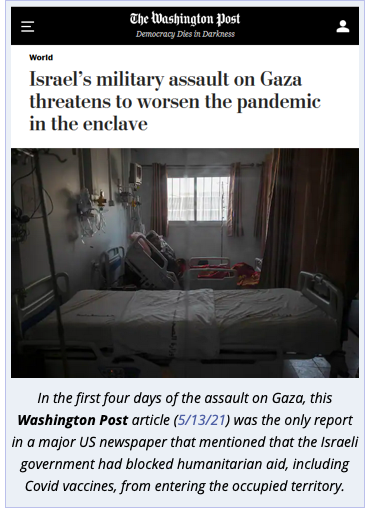 At the moment, no goods or people can enter Gaza because the border crossings are closed. This means no medical supplies, including vaccines, can enter…. In addition, no fuel to run the generators can enter, and Gaza authorities are warning of increased blackouts, including at hospitals, and potentially having no electricity in Gaza at all within a few days.

The latter is the only one of the 114 articles that mentioned that Israel has been blocking the entrance of humanitarian aid even more so than before it began this round of violence against Gaza.

On May 12, the Israeli human rights group Gisha noted that Israel is “banning all access to Gaza’s sea space, a cynical and punitive measure that harms fishermen’s livelihoods and food supply,” and that this move is a form of collective punishment that is illegal under international law. Restricting Palestinians’ food access is particularly egregious, given that 68.5% of Gaza residents are already food insecure.

Collectively, the five newspapers ran 88 articles that mentioned Gaza between May 12 and 13. Just one mentioned anything about Israel barring access to the sea, a New York Times piece (5/10/21) that said Israel “barred fishermen from [Gaza] from going to sea,” but did not point out that there is already a major problem with food access in the Strip that Israel’s move is sure to worsen. In fact, zero of the 88 articles mention that there is widespread food insecurity in the territory that Israel is incinerating.

Thus, the enthusiastic cheers for attacks on Palestinians, coming from, say, the New YorkTimes’ Bret Stephens (5/13/21), are not the only form of media misdeeds against Palestinians. It’s the inversion of attacker and attacked, or the flattening of distinctions between the two. It’s the burying of information that clarifies the scope of Israeli criminality. Such approaches can confuse the public about the differences between those who fight for liberation and those who fight to snuff it out.