Israel/OPT: Pattern of Israeli Attacks on Residential Homes in Gaza Must Be Investigated As War Crimes 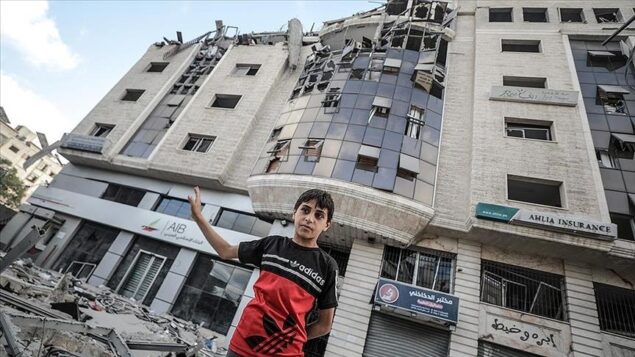 Israeli forces have displayed a shocking disregard for the lives of Palestinian civilians by carrying out a number of airstrikes targeting residential buildings in some cases killing entire families – including children – and causing wanton destruction to civilian property, in attacks that may amount to war crimes or crimes against humanity, said Amnesty International today.

Israeli forces have displayed a shocking disregard for the lives of Palestinian civilians by carrying out a number of airstrikes targeting residential buildings in some cases killing entire families – including children – and causing wanton destruction to civilian property, in attacks that may amount to war crimes or crimes against humanity, said Amnesty International today.

The organization has documented four deadly attacks by Israel launched on residential homes without prior warning and is calling for the International Criminal Court (ICC) to urgently investigate these attacks. The death toll in Gaza continues to climb with at least 198 Palestinians killed including 58 children and more than 1,220 injured. Ten people in Israel, including two children, have been killed and at least 27 injured by Palestinian attacks.

“There is a horrific pattern emerging of Israel launching air strikes in Gaza targeting residential buildings and family homes – in some cases entire families were buried beneath the rubble when the buildings they lived in collapsed.  In the cases documented below, no prior warning was given to the civilian residents to allow them to escape. Under international humanitarian law, all parties must distinguish between military targets and civilian objects and direct their attacks only at military objectives. When carrying out attacks, parties must take all feasible precautions to minimize harm to civilians,” said Saleh Higazi, Deputy Director for the Middle East and North Africa.

“Although the Israeli military has given no explanation of what military objectives it was targeting in these attacks, it is hard to imagine how bombing residential buildings full of civilian families without warning could be considered proportionate under international humanitarian law. It is not possible to use large explosive weapons, like aircraft bombs that have a blast radius of many hundreds of meters, in populated areas without anticipating major civilian casualties.

“By carrying out these brazen deadly attacks on family homes without warning Israel has demonstrated a callous disregard for lives of Palestinian civilians who are already suffering the collective punishment of Israel’s illegal blockade on Gaza since 2007.”

The Israeli army claims that it only attacks military targets and has justified airstrikes on residential buildings on that basis. However, residents told Amnesty International that there were no fighters or military objectives in the vicinity at the time of the attacks documented.

“Deliberate attacks on civilians and civilian property and infrastructure are war crimes, as are disproportionate attacks. The International Criminal Court has an active investigation into the situation in Palestine and should urgently investigate these attacks as war crimes. States should also consider exercising universal jurisdiction over those who commit war crimes. Impunity only works to fuel the pattern of unlawful attacks and civilian bloodshed, which have we have repeatedly documented in previous Israeli military offensives on Gaza,” said Saleh Higazi.

At least 152 residential properties in Gaza have been destroyed since May 11, according to the Gaza-based human rights organization, Al Mezan Center for Human Rights. According to the Palestinian Ministry of Public Works and Housing in Gaza, Israeli strikes have destroyed 94 buildings, comprising 461 housing and commercial units while 285 housing units have been severely damaged and rendered uninhabitable.

According to United Nations Office for the Coordination of Humanitarian Affairs (UNOCHA) more than 2,500 people have been made homeless due to the destruction of their homes and more than 38,000 people have been internally displaced and have sought shelter in 48 UNRWA schools across Gaza.

Indiscriminate rocket-fire by Palestinian armed groups towards civilian areas of Israel has also killed and injured civilians and damaged homes and other civilian properties. The rockets fired from Gaza into Israel are imprecise and their use violates international humanitarian law which prohibits the use of weapons that are by nature indiscriminate. These attacks should also be investigated by the ICC as war crimes.

Amnesty International has previously published evidence that the Israeli military had a deliberate policy of targeting family homes during the 2014 conflict.

In one of the heaviest episodes of bombardment since the latest fighting began, between 1am and 2am on May 16 Israel carried out airstrikes against residential buildings and streets in Gaza City. The attacks completely destroyed two residential buildings belonging to the Abu al-Ouf and al-Kolaq families – killing 30 people – 11 of them children.

Gaza’s Ministry of Labour building was also destroyed in the attacks. The attack blocked al-Wehda Street, one of the main roads leading to the main hospital in Gaza, al-Shifa.

The families residing in the four-story al-Ouf building, which included residential apartments and shops, received no prior warning – they were buried beneath the rubble in the attack.

Yousef Yassin, a medic from al-Shifa Hospital, was one of the first to arrive on the scene of al-Ouf Building after the attack and helped pull survivors from the wreckage with the Red Crescent. He described the scene to Amnesty International as one of “great destruction”.

“I helped get out four dead [bodies], but there were many more. It was very hard. There was no warning, so people were inside their home sitting together, and this is a lively, bustling area,” he said.

Lamya’s father, Hassan al-Atar, a civil defense officer told Amnesty International he headed to the scene of the attack with an ambulance and rescue team after a relative called him with news of the attack.  “He told me that our home had been bombed and [he was] stuck under the rubble [with his] wife and children,” he said.

“I arrived at the house, which is made up of three stories – 20 people live there – I tried to find people, but I could not. Then the rescue team arrived to help and we eventually found my daughter, a mother of three, with her children, one of whom was a baby, under one of the cement pillars of the house; all of them were dead. The other residents seem to have managed to escape from an opening after the bombing and got to the hospital. I was shocked,” he said.

Nader Mahmoud Mohammed al-Thom, from al-Salatin neighbourhood in Beit Lahia, described how his home where he lives with eight others was attacked without any warning shortly after midnight on May 15.

“There was no warning missile, no warning call, the house was bombed, and we were inside. Thank God that the civil defense and by sheer chance was close by and saved us from under the rubble, thank God no one died. We had injuries but not serious, when we got out I saw a fire at the gate of the house, then the ambulance took us to the hospital. I think this is when I lost consciousness. Thank God no one was badly hurt but we lost our house. We are now in the street; we do not know where to go what to do.”

His family sought shelter at an UNRWA school but the school they arrived at was closed when they arrived and they had to sleep outside in the school yard. His entire home was destroyed including his clothes, money and paperwork and all their belongings.

In addition to residential homes, Israeli attacks have damaged water and electricity infrastructure as well as medical facilities and halted the operations of the North Gaza Seawater Desalination plant, which supplies water to more than 250,000 people.