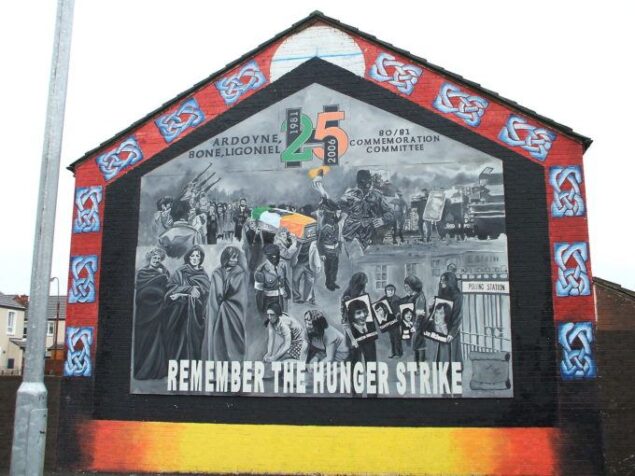 An important parallel between Northern Ireland then and Israel/Gaza today is that, in both cases, grossly excessive military force was and is used to try to solve political problems that it only succeeds in exacerbating. In the case of the Ballymurphy shootings, which took place during the introduction of internment without trial, the British government managed only to delegitimise itself, to spread hatred against itself and to act as the recruiting sergeant for the Provisional IRA.

An important parallel between Northern Ireland then and Israel/Gaza today is that, in both cases, grossly excessive military force was and is used to try to solve political problems that it only succeeds in exacerbating. In the case of the Ballymurphy shootings, which took place during the introduction of internment without trial, the British government managed only to delegitimise itself, to spread hatred against itself and to act as the recruiting sergeant for the Provisional IRA.

As in Northern Ireland half a century ago, the Israeli security services keep announcing that they are winning famous victories and killing enemy commanders, as if local leaders of the rag-tag paramilitary forces of Hamas and Islamic Jihad were irreplaceable military technicians. Israeli prime minister Benjamin Netanyahu says that Hamas and Islamic Jihad “will pay a heavy price for their belligerence.” No doubt they will, but the heaviest price will be paid by civilians in Gaza, like in the last such conflict in 2014 when 2,000 Palestinians and 73 Israelis were killed in a ‘war’ lasting 67 days.

In some respects, not much has changed since then, but that in itself is significant because Donald Trump was the most pro-Israel and anti-Palestinian president ever to occupy the White House. He and his son-in-law Jared Kushner enthusiastically endorsed Netanyahu’s thesis that Israel can achieve a lasting peace while at the same time keeping the Palestinians in a permanently subordinate position as a defeated people.

That was never going to work, but the speed with which it has unravelled over the last week, and within months of Trump leaving office, is still surprising. The ‘Palestinian question’, what one British diplomat used to call “the poison of Palestine”, is back on the international agenda, as unresolved and explosive as it has been for the last hundred years.

Perhaps the biggest effect of the hype and spin of the Trump era was to breed self-destructive hubris among Israelis at all levels of authority. Israeli officials felt free to expand settlements on the West Bank, evict Palestinians in the Sheikh Jarrah neighbourhood of Jerusalem, and order the police to throw stun grenades and use tear gas around the Al-Aqsa mosque.

In one respect, the crisis is already more intense and wide-ranging than in past ‘wars’ centred on Gaza in 2008/9 and in 2014. The new element is the involvement of the two million Israeli Arabs/Palestinians who make up 20 per cent of the Israeli population. In mixed towns and cities like Lod, Jaffa, Acre and Haifa, synagogues and mosques, shops and cars, have been attacked and individuals beaten. In Lod, for instance, where the rioting has been most intense and is right next to Ben Gurion airport, the population is made up of 47,000 Israeli Jews and 23,00 Israeli Arabs/Palestinians.

The similarity between Israel and Northern Ireland goes beyond an exaggerated and counter-productive use of military superiority to solve a political problem. At the most fundamental level, both countries contain two hostile communities of roughly equal size living intertwined in a small place.

In Northern Ireland, Catholics and Protestants each number about one million, while in the more politically fragmented area between the Jordan River and the Mediterranean Sea live 14 million people, seven million of them Israeli Jews and seven million Palestinians. The area may be divided by fortified walls and frontiers, but it is essentially a single political unit, as the spread of violence from Jerusalem to Gaza to Israel and to the West Bank has demonstrated in the last few days.

In Northern Ireland in 1971, the British government made the disastrous mistake of using the British Army to prop up what was sometimes called “the Orange State”. This meant that Catholics would have to accept a second-class status in a state run by Protestants, something that – regardless of their acceptance or rejection of physical force – the Catholics were never going to do.

The determination of the Catholic community not to roll over should have been obvious from day one of The Troubles, but it took the British government thirty years to take this on board. When it finally did so the outcome was the Good Friday Agreement of 1998 which shared power between two communities with very different identities, culture and loyalties.

It would be nice to think that the same process might one day happen in when it comes to Israel and Palestinians, but there are differences as well as similarities between the two situations. Compromise in Northern Ireland required a certain balance of power between the two communities and a recognition by all, particularly by the British government and by Irish Republicans, that neither side was going to win a complete victory.

Holding back any such compromise between Israel and the Palestinians is that the balance of power appears to be overwhelmingly in favour of Israelis. They do not feel the need to compromise because they have total military superiority and the support of the United States and other powerful nations.

Palestinian weaknesses, several of them self-inflicted, include very poor leadership and political organisation. Hamas can fire lots of rockets into Israel in a show of defiance, but this is politically counter-productive since it enables Israel to frame its actions as defensive and part of a war on terror. The Palestinian National Authority based in Ramallah hasn’t held an election for 15 years, with the latest attempt being postponed indefinitely last month — and is now deeply compromised as a representative of its people.

The best strategy for the Palestinians should be to use their great numbers in a peaceful mass campaign demanding civil right and an end to discriminatory restrictions.

The Palestinians do hold a card of the highest value, which is that Israel will not have won until the Palestinians declare that they have lost. The events of last week showed that this is not going to happen. Israel wins trick after trick at the political and military card table but can never be declared the winner because it is playing a game that does not end.