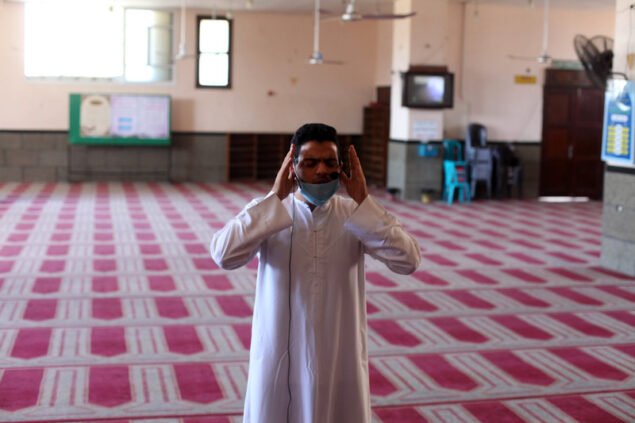 An Imam prays alone due to COVID-19 restrictions in Gaza. Photo by Mahmoud Ajjour

Like elsewhere, Gaza’s health authorities long ago decided to reserve hospital space only for severe cases of COVID-19 or those already suffering underlying conditions.

Like elsewhere, Gaza’s health authorities long ago decided to reserve hospital space only for severe cases of COVID-19 or those already suffering underlying conditions.

That has meant that the onus has been on people quarantining at home if they test positive for the virus.

Unlike most anywhere else, however, Gaza’s response to the global pandemic has also had to allow for the desperate economic situation imposed on it from the outside.

With poverty and unemployment levels at around 50 percent, the capacity of individuals to isolate for 14 days, let alone quarantine away from members of their households in dwellings that are simply too small, is limited.

For many, it is an extremely stressful situation.

Naveen Jaber, 30, from Gaza City, is a social worker. She describes living with COVID-19, which she caught at the end of December, as the most difficult experience of her life.

“I contacted the ministry of health to inform them I was infected, and they told me to isolate in a room away from my family for two weeks,” she said.

It was “very affecting,” the trained mental health counselor told The Electronic Intifada, to be so near yet still separated from her family. But it was worse for them, she said.

“They could only hear my tired voice and the severe, ceaseless cough that caused my bones to hurt. They could not help.”

Isolation from the family

During the isolation period, those suffering from COVID-19 try to strengthen the immune system by eating foods rich in vitamins, especially Vitamin C, and to get continuous exposure to sunlight, for Vitamin D.

The official advice from the ministry of health, according to ministry spokesperson Ashraf al-Qedra, is to include Zinc and vitamin supplements in the diet.

Al-Qedra told The Electronic Intifada that the ministry had early decided to admit only patients with serious underlying health issues.

The vast majority do not suffer such health problems, he said, and are better off isolating at home, though that also means in most cases that family members need to quarantine.

“We are following up with these patients on an ongoing basis. If there is a deterioration in the patient’s health, they will be transferred to hospital for treatment.”

During her quarantine, Naveen would go into her garden and sit in the sun from morning until noon.

“I was always worried about my parents, that I might infect them. It was very difficult,” she said. “The patient’s psychological health is strained not just by staying away from family, but from the fear that they could catch this dangerous virus.”

When the 14-day period ends for those quarantining at home, a swab is taken to ensure the infection is over and the individual can no longer spread COVID-19.

However, Naveen says that she has not yet regained full health. She still suffers from a number of side effects, including fatigue, difficulty breathing and a persistent cough.

Hadil Khaled, 34, a mother of three from al-Bureij refugee camp in the central Gaza Strip, works as a teacher in a government school. She tried hard to protect herself from the virus but it wasn’t enough.

“I was not happy about going back to school,” she said, “because I was very afraid of bringing the virus home to my children. But it happened: I contracted the virus and transmitted the virus to two students as well as my children. I was so worried about them.”

Hadil is immunodeficient and is considered high risk.

But she began her isolation at home and inspectors from the ministry of health concluded she was well enough to stay home, even though she suffered breathing difficulties for a while.

As a result, however, she transmitted the virus not only to her children, but husband as well.

So for the month – which is how long it took her to overcome the effects of COVID-19 – she had to be both patient and nurse for her family.

“I would make hot drinks – water with natural medicines such as ginger and honey – for everyone, so that we could get through this difficult period together.”

Compounding the situation in Gaza is a disastrous economy and growing poverty and unemployment rates.

Gaza’s economy has taken an enormous hit after 14 years of an Israeli-Egyptian siege. Between 2007 and 2018, according to the UN, the blockade caused the area’s GDP per capita to shrink by over a quarter, losing the area revenue of nearly $17 billion.

With poverty affecting over 55 percent of Palestinians in Gaza, people’s capacity to absorb the economic pain brought by the pandemic has been drastically reduced.

Poor families are less likely to be able to properly isolate in homes with no spare rooms.

Every day is a struggle to earn enough money to afford medicine and food. This makes it harder to respect lockdown restrictions, since breadwinners need to work, and it makes it more difficult to take proper health precautions for self and family.

Generally, the pandemic has exacerbated the disparities between rich and poor in Gaza, as elsewhere.

Fadi al-Hassan, 45, is a taxi driver from Khan Younis, in the south.

He caught COVID-19 at the beginning of January. He is in little doubt, he told The Electronic Intifada, that he caught the virus because he couldn’t afford to stop working.

“I had to work in order to support my eight children. They need food. There are daily expenses.”

When he started experiencing symptoms – he had lost his sense of smell and taste – Fadi contacted the ministry of health. As per protocol, he was told to isolate at home, which he did.

“It is very difficult to face a pandemic when you are poor,” Fadi said.

Quarantine is enforced. In cases where people need to isolate, the authorities in Gaza station police outside the homes of the quarantined to ensure patients and family members do not mix with others in the neighborhood.

Furthermore, medicines and vitamins are expensive, so in Fadi’s case, he relied on herbal hot drinks.

“My house is small, there is no room for me to isolate. I spent most of the 14 days on the roof. I was always afraid I would give the virus to my wife or kids. It was very difficult.”

The ministry of the interior, in an effort to reduce the spread of the virus, has announced a number of containment measures. These include complete lockdowns on evenings after 8 pm and weekends – Fridays and Saturdays in Gaza – when shops are closed and people are only allowed local travel.

According to the latest numbers from the World Health Organization, Gaza has seen more than 53,000 cases of COVID-19 and suffered over 500 pandemic-related deaths.

And there is no let-up in sight.

“We are still working hard to overcome the winter season, which has yielded the highest rates of infection,” al-Qedra told The Electronic Intifada.

He said despite the odds, hospitals had survived the peak period, from mid-December to mid-January, when there were more than 1,000 cases per day.

But a decimated health sector in Gaza is now bracing itself for a future in which new strains keep appearing around the world even before it has taken delivery of any vaccines itself.

Some vaccines have been delivered to the West Bank Palestinian Authority. Other will come later under the WHO’s Covax program.

But it is not clear when these will arrive in Gaza due to Israeli restrictions. Indeed, on 16 February, the West Bank PA said the Israeli military had prevented the delivery to Gaza of a limited number of vaccines for health professionals there.

Majdi Dahir of the ministry of health in Gaza said he was nevertheless optimistic that a vaccine program would start rolling out this month.

The ministry has now started registering Palestinians in Gaza for a jab.

Ruwaida Amer is a journalist based in Gaza.

Headline photo: Palestinian imam who calls Muslims to prayer at a mosque is empty of worshipers during the imposed lockdown to mitigate virus outbreak in the Gaza Strip, in Gaza city on August 28, 2020, during a lockdown in the Palestinian enclave due to increasing cases of coronavirus infections. The new cases, outside Gaza’s official COVID-19 quarantine areas, have raised alarm bells this week in the sealed-off enclave that has weathered the pandemic relatively well so far. Photo by Mahmoud Ajjour 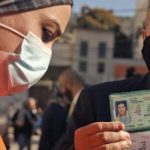 Palestine elections: A leap into the unknown for Fatah and HamasPalestine 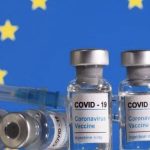 Europe could make good use of a new SDR allocationCOVID-19 Corona virus, Europe