ISIS remains only in the US-controlled areas of Syria. So exactly why are US forces there at all?

The Islamic State’s (ISIS) last pockets of resistance are located inside areas controlled by the U.S. forces, the Russian Ministry of Defense Spokesperson Major General Igor Konashenkov said this morning.

[framed_box width=””]“As for the current situation in the Syrian Arab Republic, we recommend the Pentagon chief to examine the map showing the situation in this country. All remaining pockets of resistance of Daesh terrorists in Syria are located only in areas controlled by the United States,” Konashenkov said.[/framed_box]

The spokesman noted that the Russian Defense Ministry was bewildered by “verbal manipulations” of Mattis regarding the situation in Syria, stressing that the expansion of the Daesh terror group to Syria had become possible due to “criminal omission” of the United States and the international coalition.

The Russian general was responding to U.S. Secretary of Defense James Mattis’ claims that Syrian President Bashar Al-Assad was creating problems in his country by inviting both Iran and Russia to enter Syria.

Furthermore, the Russian MoD’s Spokesperson slammed the U.S.’ ventures in Syria, adding that their weapons often fall into the hands of terrorists.

[framed_box width=””]“All this time Washington focused on financing and direct arms supplies to fictional ‘Syrian opposition’ totaling hundreds of millions of dollars. However, the vast majority of US-supplied arms and ammunition fell into the hands of the Syrian al-Qaeda branch – Nusra Front [terrorist group, banned in Russia] and Daesh, who sought, like Washington, to overthrow the legitimate Syrian government,” Konashenkov said.[/framed_box] 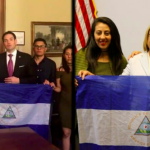 US Gov. Meddling Machine Boasts of ‘Laying the Groundwork for Insurrection’ in NicaraguaNicaragua, USA, War Drive